Author: waytorussia (on 04 Jun 2015)
Tweet
As you well know Russia is the land of abundance. To get to Baikal itself your best bet is a Trans-Siberian train or a plane. Both cost about the same, so if you're not particularly into train travel (it's 4 days on board, after all), take a flight to Irkutsk or Ulan-Ude instead (it takes about 6 hours from Moscow and costs €150-€300 one way, just like the train).

Once you made there, you have several options to get around Baikal: helicopter, cruise ship, fishermen's boat, motorcycle, snowmobiles, car, train or simply by foot. The most accessible and consistently available way of traveling is by bus or by car. You can take a 6-hour trip to Olkhon island from Irkutsk or a 5-hour trip to Goryachinsk wild beaches at the Eastern side of Baikal from Ulan-Ude. Both are accessible and super nice. If you're a bit more adventurous and have time to spare, by all means take a boat. It will take longer and will be more expensive, but it's definitely the way to travel if you want to enjoy the process and not only the result.

Another way is to take a speed boat from Irkutsk to Olkhon with the local VSRP (East Siberian River Transport) company. They have ferries from Irkutsk to Olkhon that depart every monday at 9.15 and arrive to Khuzhir directly at 17.15. The ferry continues to the opposite side of the lake on that same day, so you can also use it to explore the Buryatian eastern side of Baikal. The ferry back to Irkutsk on Tuesdays. This route circulates only from 7th of July until the 24th of August and they have an additional route on Wednesdays in the last week of July and the first week of August.

For up-to-date ferry schedules between Irkutsk, Okhon and Ust-Barguzin (read more about it on page 606), check out the website of VSRP Irkutsk river transport company on http://bit.ly/vsrpbaikal 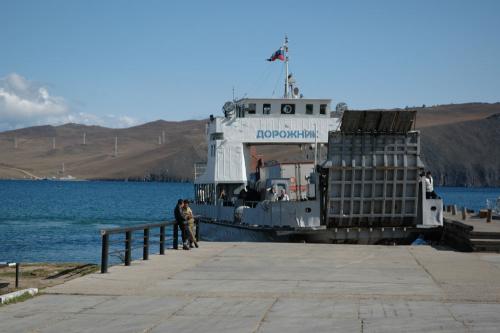 There are also ferries between the mainland and Olkhon island – these can load vehicles on board and are usually running connected to bus schedules (see below).

During the summer there is also a weekly ferry connecting Ust-Barguzin (6 hours drive north from Ulan-Ude along Baikal) to the Western shore (Olkhon island, Listvyanka and Irkutsk). It takes about 2 hours to Olkhon island and about 9 hours to Irkutsk. Check out the up-to-date schedules on www.bit.ly/vsrpbaikal

Once you make it to Ust-Barguzin, you will want to access lots of nice hidden beaches around there.There are, however, fishermen who can give you a lift not too far for money. If you are in a village and want to sail somewhere, just go to the local port or the place where boats are and ask people if they can lift you. There is a slight chance that they will help you for free, otherwise the prices are quite reasonable - for short distance voyages around $10 for 10 minutes of sailing. There are also a taxi-boats owned by people who make money on tourists. They will ask you to pay a fortune for a minute sail. You better not deal with these people – however there are places like Snake Bay (which is nice place in fact, on the Eastern shore of Baikal) where you can’t avoid using their shitty service.
If you want to have a long distance travel you should book it through a travel agency in Moscow or in Irkutsk. It will be hard to find an available boat during the high season.

Traveling with a Train

To get to Baikal itself, you might want to check our selected trains on the Trans-Siberian timetable page. Generally it takes about 4 days and costs from €150 one way for 3rd class (common carriage) to about €250-€300 one way for 2nd class (4-berth coupe). The trains are quite comfortable and OK, so it's not a big deal to travel in this way and the journey is super interesting.

What a lot of people miss, however, is that Irkutsk is not the only city on the Trans-Siberian Baikal stretch. There's also Ulan-Ude (6 hours after), which is an amazing place and it provides you access to the much less crowded East coast of Baikal lake, which is amazing if you're into quiet time in the nature and camping (although keep in mind the road is very near the lake, so if you want wild wild you have to go as far as Ust-Barguzin - opposite of Olkhon island).

Irkutsk-Ulan-Ude railway with a number of stops on it. It takes around eight hours to get from one city to the other. The main station on the way is Sludyanka – the starting point for the trips to Arshan (Sayan mountains) and for the Circum-Baikal railway.

Circum Baikal railway starts in Sludyanka and goes to the Port Baikal (across the river from Listvyanka). The whole trip by a daily train takes about 5 hours. There are stops in every village on the way. In several villages there are small hotels where you can stay in, otherwise you can camp right on the shore. Learn more here.

There is no road around lake Baikal, however you can get by car at many points in the southern part of Baikal and drive to Olkhon island as well.

For the east coast (Buryatia side) the good road goes up to Ust-Barguzin (about a 5-hour drive from Ulan-Ude), from where you can then take a ferry to the opposite side of the lake.

If you travel by car, you should always have enough petrol with you to get back to the petrol station. There are number of stations on the Irkutsk-Ulan-Ude road, as well as on the road along Eastern shore of Baikal (Ulan-Ude - Ust-Barguzin) and along the road from Irkutsk to Olkhon island. Diesel can be bought from the fishermen in villages. It is hard to get fuel at Olkhon Island. Most of the roads are not asphalted and you better use all-wheels-drive car. The road to Olkhon is in a good condition (except the last 60 km, where it's just not asphalted), but be prepared to stay in a several hours line to get to the ferry from the mainland to the island and back (buses have a priority – that's why it's good to go with a bus and then rent a jeep at Olkhon itslef). Also, everybody who travels around Baikal should carry a spare tire: it's not a rare sight to see someone with his tire broken on the road.

If you're traveling from Irkutsk or Ulan-Ude to Arshan, take a minibus - they depart every 2 hours from the main train station and are much faster than standard buses.

There are many privately owned minibuses following the regular buses routes. The minibus is usually faster and the ride costs more. The minibuses park at the bus stations and have no timetables. It departs as it is packed with clients. To find out where the current minibus is going to look at the windscreen – there should be a sign with a written destination on it. You should pay for the ride directly to the driver. You will be asked to pay the double price if your backpack will be to big and will be placed on the seat. You can hire the whole minibus, ask if a driver can get you to the certain place and how much money he wants for this.

BaikalLake is situated along the Trans-Siberian route, so if you take that route, you absolutely have to stop at Baikal.