Author: waytorussia (on 04 Jun 2015)
Tweet
Baikal Lake is situated along the Trans-Siberian route, so if you take that route, you absolutely have to stop at Baikal. There is no excuse if you don't, because traveling 5000 km with a train and bypassing this beautiful lake would be something you'd regret for the rest of your life!
There are two main means of transport to get to Baikal lake: by plane or by train. If you are traveling from a nearby town (such as Irkutsk or Ulan-Ude), you can also get to Baikal lake by bus or by car. Below, we will look at each of these means in more detail, but first — a short look at the main cities close to Baikal (so that you know your destination). 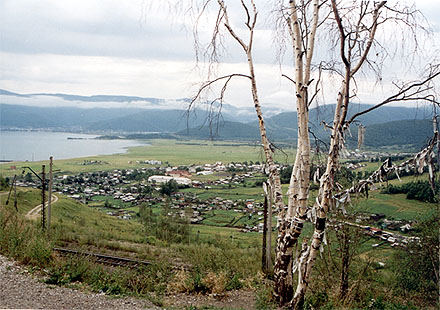 The Cities on Baikal

The three main points of access to Baikal are Irkutsk and Ulan-Ude cities and Slyudyanka settlement. You can get to Irkutsk and Ulan-Ude by plane, train (Trans-Siberian), or bus. Slyudyanka is a stop along the Trans-Siberian also, and you get get there by bus from Irkutsk too. There's also Baikalsk on the eastern shore of Baikal lake, but fewer trains stop there, and it is of no interest.

From Irkutsk you can either go to Lisvyanka (popular village, which is the closest place on Baikal (65 km - around 1.5 hours by bus or car)), Olkhon island (which is complete wilderness, but with all the comforts - 250 km - about 7 hours by bus or car), Port Baikal (to start the Circum Baikal railway) - next to Listvyanka, or to Slyudyanka (which is slightly further, but is a good point to explore Circum Baikal). Some river transport can take you for a day trips to one of the bays further North from Listvyanka.

From Ulan-Ude, the first place on Baikal you will most probably get to from is Gremyachinsk settlement (250 km - 3-4 hours by car or bus). It is a great place, and from there you can start your own exploration. We highly recommend to move on to Goryachinsk (1 hour from Gremyachinsk) after a few days (great beaches, perfect for camping, there's also a spa curort, so you can get a room for about $5/night if there's one).
If you ever thought about going to the end of the world, then continue your way from Ust-Barguzin to Svyatoy Nos peninsula, which is a wild tourist's mecca. There are buses along all the way up to Ust-Barguzin.

Traveling to Russia by Plane

This is the fastest way to get there. There are regular flights between the major Russian cities (such as Moscow, Ekaterinburg, Novosibirsk, Krasnoyarsk, Vladivostok, etc.) and Irkutsk or Ulan-Ude, which are located within a close reach to Baikal lake (Irkutsk: 65 km, Ulan-Ude: 250 km).
Normally, a one-way flight Moscow - Irkutsk would cost you about 4000-8000 R ($100-$200 US), a return flight is twice more expensive. The trip Moscow - Irkutsk takes about 6 hours. Aeroflot Airlines and Sibir Airlines have a few flights every day.
It is slightly more expensive than taking a train, but the train is more interesting in the way, that you get the opportunity to really "feel" the distance (5000km!), enjoy the landscape, meet different people, and to be able to say that you traveled overland 1/4 of the world (well, that's including China).

We would recommend taking a plane if you are kind of in rush and prefer to have more time at Baikal, or if you plan to return to the West afterwards: in this case, you can take a plane in one direction, and then — a train in the other direction (we prefer getting there by train - to "assimilate", and getting back by plane).

Getting to/from Irkutsk: All planes arrive in the main Irkutsk airport, which is strangely enough located inside the city. So, after you arrive it will really be a short way to the center of the city: about 15-20 minutes by taxi (100 to 200R = $3-$8 US), and 30-50 minutes by bus (10-20 R = < $0.5). [See more info on getting around between the airport and the city in Irkutsk / Transport section].
We recommend you to spend about 1-2 days in the city, and then move on to Baikal.

Getting to/from Ulan-Ude: There's a regular air service between Moscow and Ulan-Ude. All planes arrive in Ulan-Ude main airport, and you can get to the center of the city by taxi or bus. [See more info on getting around between the airport and the city in Ulan-Ude / Transport section].
You can spend a few days in Ulan-Ude to see the Buddhist Datsan, Ethnographic and History Museums, and then make your way to Baikal. The eastern side of Baikal (accessed from Ulan-Ude) is not so "commercialized" as the Western part, even though it is completely accessible overland (unlike the Irkutsk part - because of the mountains), and offers great possibilities of homestays with locals and camping (but don't expect any hotels).

Travelling to Baikal by Train

The Trans-Siberian route goes through Irkutsk, Slyudyanka, and Ulan-Ude, so you may choose to stop in one of these three places, whatever direction you're going into. Generally, Irkutsk is good for a more civilized exploration (western shore of Baikal), Slyudyanka (southern tip of Baikal) is good for the exploration of Circum-Baikal railway, while Ulan-Ude (eastern shore) is a great place to start "wild camping" or staying with locals in villages along the lake.

Irkutsk is located slightly less than 5000 km from Moscow, and it takes about 4 days to get there (3 days from Ekaterinburg, 2 days from Novosibirsk, 1 day from Krasnoyarsk). Ulan-Ude is a 7-hour journey towards the East (and Mongolia with China) from Irkutsk. Alternatively, you can get to Irkutsk in 2 days from Beijing, China, or in 1 day from Ulan-Bataar, Mongolia. If you're going from Vladivostok (Russian Far East, Pacific Ocean), Irkutsk is about 2.5 days away.
The price of the trains always change, but generally expect to spend somewhere between $70 and $200 on one way from Moscow to Irkutsk (depending on the class you choose, average - about $130 = 4000R). And it is about the same price to/from Beijing, China.

Getting to/from Irkutsk: All trains arrive at the main railway station, which is very close to the center. There are few hotels around, but the main "core" of the center is on the other shore of Angara river (about 10 minutes by transport). If you decide to continue your trip to Baikal, you'll need to go there anyway, to catch a bus from the main bus station.

Getting to/from Ulan-Ude: The railway station is just a 7-10 minutes walk from the main center and most of the hotels (though there's one just opposite - 3 minutes walk). If you're continuing your way to Baikal, you'll need to make it through the center to the bus station, which is about 15 minutes by transport, or 30 minutes walking.

Traveling to Baikal by Bus, or by Car

You will probably travel by bus or by car either from Irkutsk or Ulan-Ude (there are no other roads to access Baikal lake).
The western shore of Baikal (Irkutsk side) is less accessible by road — only Listvyanka (65 km from Irkutsk), and Olkhon island (250 km) can be accessed overland. All other places (like Peschanaya Bay), should be accessed by river transport. The road is very good to Listvyanka, the road to Olkhon is good only halfway, the other half doesn't have asphalt, so it may be kind of bumpy, but still ok.
The eastern shore of Baikal (Ulan-Ude side) is accessible by road all the way up to Ust-Barguzin, and in fact there are many travelers who camp with their cars on this shore. The road on the other side of Baikal (eastern - Ulan-Ude) is asphalted all the way up to Ust-Barguzin, but I wouldn't call it comfortable. You can also reach Baikal via a south road from Ulan Ude, a very good federal road M55, it takes about 1-1.5 hours by car.
But both journeys worth to be taken: even if it seems strenuous, you'll be rewarded with a cool water of Baikal under nice evening breeze...
There are regular buses to Listvyanka (6 a day, price: about 70 R ($2), takes about 1.5 hour), Olkhon (1 a day, price: 200-400 R ($7-$14), takes about 7 hours), and along the eastern shore of Baikal (at least 1 a day, from/to Ulan-Ude (the longest to Ust-Barguzin costs about 250 R ($10) and takes about 7 hours). The buses are not of best quality, but quite ok, at least they don't tend to break down, and if they do - you can always find an alternative (if it's not too late).
The are petrol stations on all roads. On the way to Listvyanka, there's a petrol station just before Listvyanka. On the way to Olkhon island, there are a few petrol-cars selling the petrol outside (the quality is ok for a Russian car). On the other side of Baikal (Ulan-Ude), there are also petrol station along the way, at least between Gremyachinsk and Goryachinsk.
The are no parkings, but you can really park your car anywhere you want, without a problem: Russian people usually come on the shore of Baikal for a few days, park their car just next to the lake (if accessible), and put up the tents and even kind of settlements, so you have a chance of meeting new friends as well. Strangely enough, the lake doesn't look polluted because of this, maybe there are not so many cars after all, maybe the people are tidy, maybe somebody is cleaning it, or maybe I just haven't noticed.