Author: Maria Mushtrieva (on 04 May 2016)
Tweet
The best way to spend good time in Novgorod is to go swimming, especially if it's hot outside.
Another great way to rest is to walk around the historical center of the city: Kremlin, Yaroslavovo Dvorishche. If you're up to clubs or bars, it'll be a bit hard to find something interesting: most Novgorodians like to walk outside and aren't fond of clubs or bars, but there are a few places anyway. 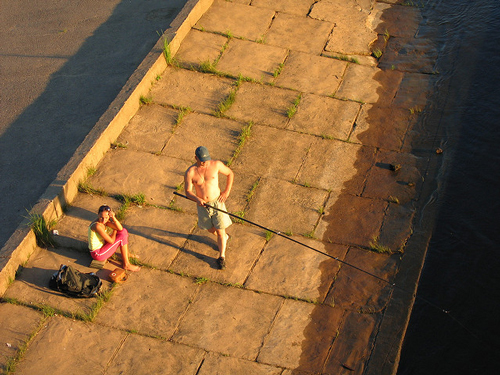 A Beach Near Detinets (Kremlin)

There's a large beach (p`lazh - in Russian) on the Volkhov river, just next to the brick Detinets (or Kremlin) walls (on the right of the hump-shaped pedestrian bridge). The beach is usually packed, but it's a great place anyway: I've never seen a beach where you can swim just in the centrum of the city, next to the Kremlin wall, have you? 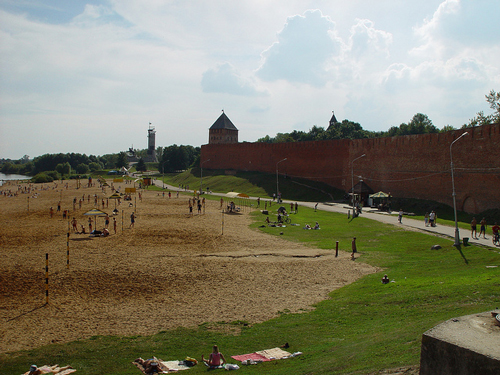 The water is relatively clean, the first day I came to Novgorod I asked everyone I saw if it's ok to swim there, and people say that the water is clean, especially that all the factories and plants were moved down the river, so there's no productions inside the city.
Anyway, it looks clean and the water is warm. Be careful of the stream though. The beach itself is ok too, but it's quite crowded, especially in the daytime.
Directions: walk through the Detinets (Kremlin) to the pedestrian bridge over the Volkhov river, on the right there'll be the beach (pl'aj).

A Beach on Ilmen Lake

If you're looking for a less crowded place, you can try this beach outside of Novgorod, near "Skit" monastery. That's the place where the river Volkhov starts from a large lake Il'men (60 by 40 kilometers), just 5 kilometers south of Novgorod. 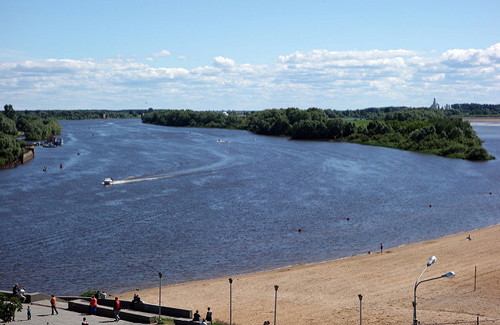 Can be quite crowdy at the daytime, mostly children and teenagers, but the water is very warm (because the lake Ilmen isn't deep = maximum 4 meters), and it's further from the city, so it's clean.
Directions: take the bus #7, you can do it either at Oborony Ul., or better at the first stop just in front of the railway station, because the bus is quite crowdy and packed with people. It departs every 15-20 minutes. The trip will take around 15-20 minutes, you need the direction of Yuriev Monastery, and you need the stop just before the Yuriev monastery - Skit monastery.
You'll recognize the stop, because many people leave the bus there. Just to orient yourself: along the way you'll pass the deserted airport, and then a village, where there'll be a large white house with a Russian flag on it. You need a stop just after this house. When you leave the bus, walk straight ahead to the direction of the Ilmen lake (5 minutes).

You can take a ferry along Volkhov river to Ilmen lake just on the left of the pedestrian bridge over Volkhov river, in front of the Kremlin.

Tourist Information - Red Izba Novgorod has a very good tourist information center called “Red Izba”, which offers free advice, Wi-Fi (inside and outside in the park around the center), and even emergency services for tourists.

Novgorod Region is our favorite destination for nature trips in the European part of Russia.
Novgorod Guide:
This free independent travel guide to Russia exists thanks to the commission we get when you order these hand-picked trusted third-party services or when you buy our book. Please, support us!