Brief History of Novgorod in Dates

Author: Maria Mushtrieva (on 27 Aug 2018)
Tweet
Novgorod was considered to be the second main city after Kiev in Ancient Rus' in the mid centuries. It was a rich and a powerful city, and the State of Novgorod was as large as the present Sweden.
The power of the Novgorod State was based on the international trade. Novgorod was the main Russian port for many centuries and was important for Baltic sea trade, so the city participated in the Hansa Union (the union of the richest Baltic ports). Also, one of the main routes for medieval Europe lead through Novgorod, and it was on the way from Northern Europe to Rome Empire and Constantinople.

The first and the only republic in Russia

Novgorod was the city of trade, that is why merchants got power and decided to get rid of the nobles. So, the republic was proclaimed. It became the first and the only republic in Russia. Soon after that, Tartar army occupied most of the country and Novgorod was the only city, which wasn't captured by them. Novgorod is situated in the north of Russia and was separated from the rest of country by the swamps, so Tartars weren't able to reach the city.

Becoming a part of Moscow State

From the very beginning of Russian history, Russia was divided into small princedoms, which fought against each other (much like Germany where the princedoms didn't fight as much). In the 15th century the princedom of Moscow was becoming more and more powerful and was constantly taking the new territories. Novgorod army was defeated and Novgorod was joined to the State of Moscow after a bloody crusade organized by Ivan The Terrible. 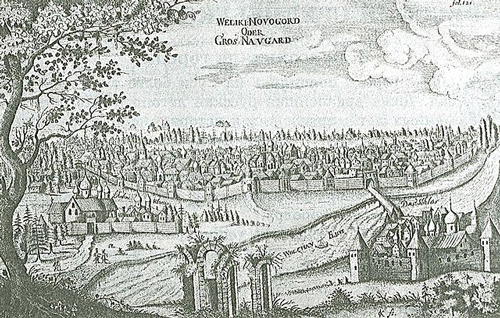 Afterwards city became less and less powerful and finally, when St. Petersburg was built, Novgorod lost its importance of the only Russian port near the Baltic Sea.
Nowadays, Novgorod is a small, calm provincial town, with splendid old Russian architecture, interesting museums, clean river next to the Kremlin, fresh air, many trees, and nice and helpful people. Novgorod has the feeling of Russia, that no other city has.
The nature around Novgorod is beautiful. In just 2 hours you can travel to the beautiful Taiga lakes to do some camping and to reconnect with yourself. Otherwise you can also stay at a comfortable village house and try Russian sauna near Okulovka town about 2 hours away.

Important dates in history of Novgorod

859 - The Town of Novgorod was first mentioned in the Russian chronicles. "Novgorod" means "New Town" in Russian, but nowadays it is hard to guess what was the Old Town, perhaps the first settlement on this place.
1014 - Novgorod got independence. Generally Novgorod was the part of Kievskaya Rus' Kingdom (first Russian state), but the small town soon became a rich city and obtained enough power to proclaim independence and set up an own state.
1044 - New stonewalls of Detinets were built. Detinets is local title for a town castle (Kremlin). Stone castle in Novgorod was one of the first in the country, and only the most powerful cities in Russia could afford it.
1045 - The Church of Saint Sofia was built in Detinets. This church soon became the main cathedral of Russian North, due to its beautiful architecture and great size. 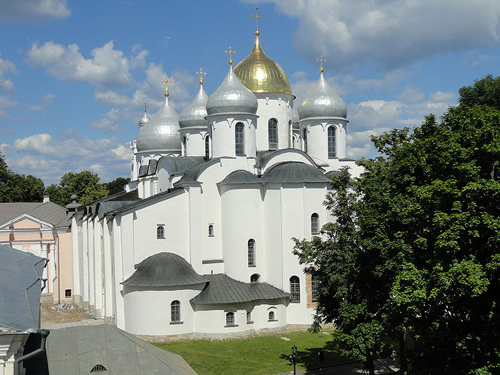 1136 - A republic was set up in the state of Novgorod. Princes from the very beginning had ruled Novgorod, but soon people got tired of nobles and proclaimed a republic.
They had special type of elections: there was a big square where people of Novgorod gathered and shouted for their candidates. The candidate who was accepted louder became a Ruler. Princes were still invited, but only as military leaders hired with their own armies to protect the city.
1240 - Prince Alexander was invited to Novgorod to protect it. Swedish army tried to capture Novgorod, but army of the Alexander defeated them near the Neva River. Alexander got the new title - Alexander Nevsky (later the first and the main avenue in St. Petersburg was called in his name: Nevski Prospekt). 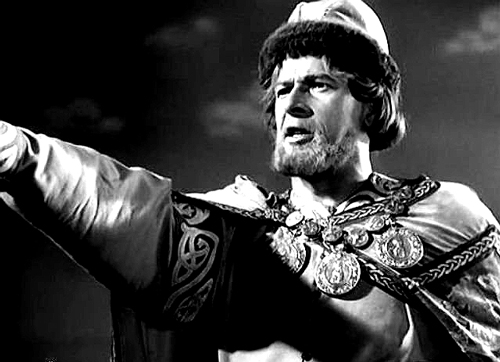 1242 - Alexander Nevsky saved Novgorod one more time. State of Teutonic order, which bordered Novgorod republic, decided to get rid of the neighbors. Huge army of well-equipped skilled knights attacked Novgorod, but Alexander Nevsky defeated them near Chudskoe Lake.
1478 - Novgorod became part of Moscow kingdom and republic was wiped off. Kingdom of Moscow was becoming more and more powerful; it had already joined many cities and towns all over Russia. It was turn of Novgorod to join. Novgorod could not keep the republic and the first republic in Russia was cut down.
1611-1617 - Swedish army controlled Novgorod. It was hard time for Russia: there was a civil war, and at the same time Poland, Sweden and Turkey attacked it. Russia had lost Novgorod, but later managed to take it back.
1862 - The monument of "1000 years of Russia" was built in the Detinets. Novgorod considered to be the oldest town, where first prince of Russia ruled, so they decided to built monument in this city.
1941 - Nazy army captured Novgorod.
1944 - City was liberated by Soviet army. It was completely demolished, like many other cities in Soviet Union, but government included Novgorod in the list of the top 15 soviet cities to restore. Novgorod was important cultural center and morale of people would be greatly increased by restoring it.
1992- Historical part of Novgorod was included in the List of World's historical heritage.
2001- Novgorod city guide appeared in WayToRussia.Net guide to Russia.

Tourist Information - Red Izba Novgorod has a very good tourist information center called “Red Izba”, which offers free advice, Wi-Fi (inside and outside in the park around the center), and even emergency services for tourists.

Novgorod Region is our favorite destination for nature trips in the European part of Russia.
Novgorod Guide:
This free independent travel guide to Russia exists thanks to the commission we get when you order these hand-picked trusted third-party services or when you buy our book. Please, support us!