Author: Maria Mushtrieva (on 04 May 2016)
Tweet
The Yaroslav's court is located on Torgovaya Side - on the opposite side of the Kremlin-Detinets. 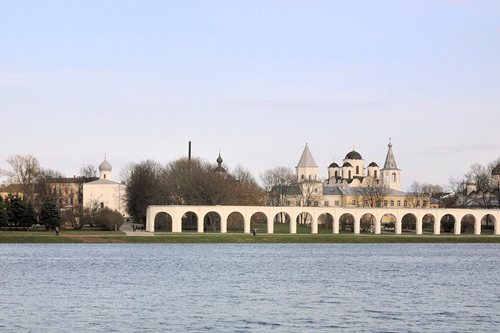 This was the economical and political center of the ancient town of Novgorod. Close to Yaroslav's Court, there's a territory called "Torg", that's where the merchants from all over Europe made their deals, and had their offices. Novgorod used to be one of the Russian Hansa cities. 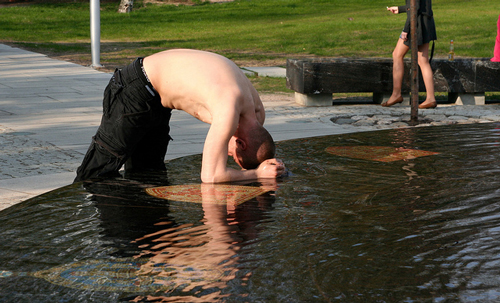 There are six churches in Yaroslavovo Dvorishche and a tower (it was a gate tower for the court).
It's a nice green area with many masterpieces of Russian architecture gathered at one place. If you have some time and don't want to look at all these churches in the town you can just come here and in one hour you will see all the best of Novgorod.
The oldest building is the St. Nikolai Cathedral, which was built in 1113. This is a big 5-dome cathedral was recently renovated and functions as a church again. Some fragments of original frescoes from the 12th century survived. The best preserved fragment depicts Job. 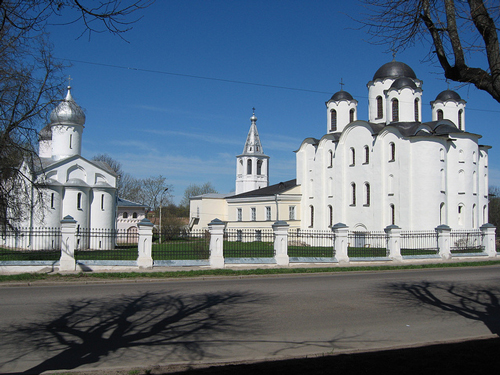 Church of Spasa-na-Iliene was built in the 1374, and it is famous for its frescos as well. Most of them were made by Feofan Grek - one of the most famous Russian icon painters.
The frescos are in bad condition, but you can find some good images at the north-west part of the church. If you will cross the river from the Sophiskaya storona to the Torgovaya, go straight along Iliana street, and in 4 blocks there will be this church on your left. 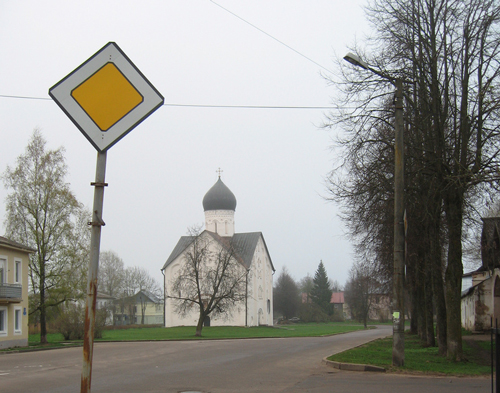 Open: daily, Mon is day off, 10.00-15.00.
Znamenski Cathedral is situated right in front of the Church of Spasa-na-Iline.
This cathedral of 17th century is a typical building of Moscow architecture school. In the 17th century Novgorod was already part of Moscow kingdom, so the new architecture traditions were applied here as well. 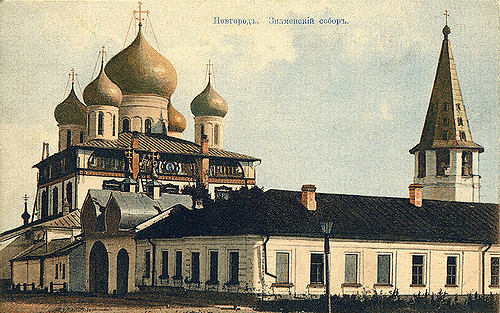 Church of St Teodor Solunski on the Spring kept its name but you won't see the spring anymore. It was leveled during the construction of the Moscow - St. Petersburg railroad. This nice church was built in the 14th century, it is poorly decorated and simple which makes it very charming. There are some frescos inside. This church is situated in the Feodorovsky Ruchey prospect, this street is parallel to the Iliana. 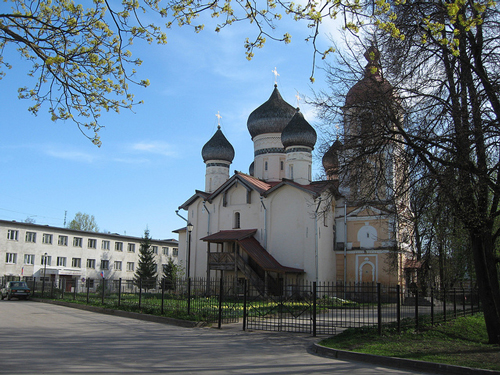 You will easily find it: it is the only building in the Detinets built in Gothic style.

A great museum of wooden architecture that also tells a lot about the life of Russian peasants during the XVII-XIX centuries.
Sightseeing Guide:
This free independent travel guide to Russia exists thanks to the commission we get when you order these endorsed third-party services or when you buy our book. Please, support us!

Learn everything you need to know about the travel restrictions imposed in Russia due to Covid-19 pandemic.

01/07/2020: While most foreign nationals are banned from entering Russia from the 18th of March, there is a high chance the borders will open not later than 31st of July 2020. All foreigners who stayed in Russia have their visas extended automatically until the 15th of September 2020. Read more on our Coronavirus Russia travel updates page.
Follow us on social networks to stay up-to-date:
Trustpilot