One of the most expensive and luxurious festivals in Russia is Alfa Future People Festival sponsored by Alfa Bank. It takes place in a secret Soviet air field near Nizhny Novgorod on the bank of the Volga river. It is meant to be one of the biggest festivals of electronic music and new technologies with a massive sound system and unique light show.

Exhibitions are an important part of the festival There are also more than 20 sports grounds, unique installations, and lecture halls devoted to the development of modern technologies function. Over the years, such technological innovations as a simulator of the Soyuz spacecraft, a mobile agrofarm, were presented at the festival, and in 2017 the festival first came into direct contact with the ISS.

The area around the festival is really breathtaking. Apart from the powerful streams of the Volga River, there are other attractions: The Church of Michael the Archangel, Shukhov Tower in Lyakhov, Guryanovo Lake, Bust of Ryazanov in Bolshoi Kozino and Estuary Pyra River in case you are tired of sound and lights and want to check out Russian cultural heritage. 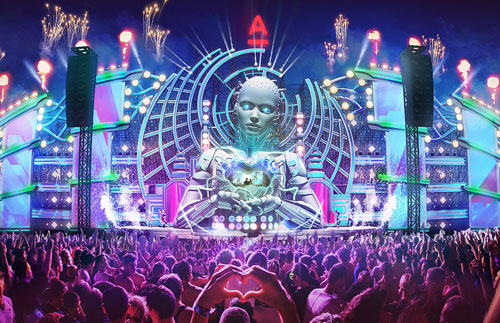 How to get there: Bolshoe Kozino is around 45 minutes north of Nizhny Novgorod International Airport, though it is a lot closer to the city of Nizhny Novgorod itself. The airport is a 1-hour flight, or a 4-hour train ride, from Moscow. From Nizhny Novgorod one can get a train from the central railway station to Bolshoe Kozino which leaves every 30 minutes. A special festival ticket will be issued for the guests of Alfa Future with unlimited travel options. The purchase of such is possible via festival site.

Where to stay: The territory is equipped with comfortable campsites. If you prefer to stay in a hotel there are many options in the nearby city Nizhny Novgorod.