Nashestvie is definitely a full-on head-banging experience. One of the long-player open-air festival, Nashestvie which translates as “invasion”, is set up once a year by the country’s most popular rock radio station “Nashe Radio”. It’s famous not only for classical rock music but also for being the muddiest festival as the weather can be really rainy in summer. Notwithstanding this fact thousands of people still gather to support their favourite everlasting bands. Fathers of Russian rock will slay for three days in a row while the visitors will have a chance to enjoy massive beer barrels prepared for the festival. This year it’s also a 20th anniversary. That’s why the lineup represents the legendary Russian rock names like Akvarium, DDT, B-2, Splin, Alisa, Bravo, Picnic and young rock collectives. Nashestvie is one and only Russian version of well-known British festivals like Glastonbury or Reading. You should be prepared for a lot of drunk people and dirt though. The festival provides not only heavy guitar riffs sounds but also the whole infrastructure of entertainment such as cinema, library, lecture hall, sport center and even a registry office for those who made up their mind and decided to marry. 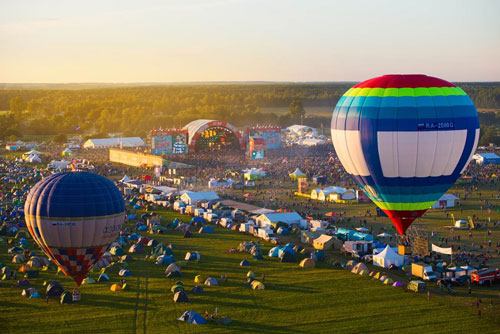 How to get there: Take a train from Komsomolskaya railway station in the center of Moscow to Konakovskiy Moch and from the station you can take a taxi.

Accomodation: There is a choice between hotel rooms close to the festival and camping sites at the territory. To book, check out the festivals website.