Stereoleto is a family festival held in Saint Petersburg in a newly opened event space right on the Neva river embankment on the Vasilevsky island – port Sevkabel. From the port you can catch a pretty stunning view of how the Neva flows into the Gulf of Finland. Picturesque place to watch sunsets while listening to energetic live acts. This annual festival is mostly focused on alternative music, indie rock, folk and hip hop.

The crowd at Stereoleto is usually really friendly to be around. Areas of the festival are equipped with the playground zones offering a large variety of activities for children – sports, games and workshops. In addition to music there are many visual arts, design and variable cuisines booths available for all guests of the festival. The headliner of Stereoleto will be a British soul and hip -hop singer Rag’n’Bone Man. From Russian side, however, a lot of Russian pop stars going to perform this year including Monetochks, Mumiy Troll, IC3PEAK (which is famous for being forbidden in Russia for their anti-government songs) and some rising artists from local scene like AIGEL, Laud and Merzota. So if you want to explore  the contemporary Russian pop music or just curious to get to know a wide variety of pop culture Stereoleto is a good option because if the music is too intense, you always have a back up plan to watch the sunset over the extensive waters of Gulf of Finland. 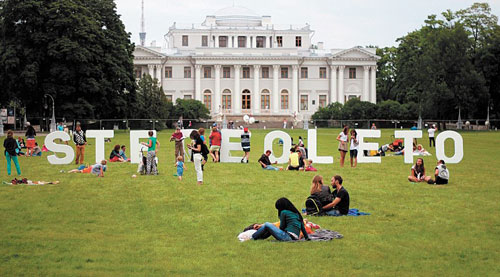 How to get there: Kozhevennaya liniya 40, Vasilevsky Island