The Golden gates were built at the western entrance to Vladimir in 1164, when Vladimir-Suzdal principality was ruled by Andrey Bogolyubsky. 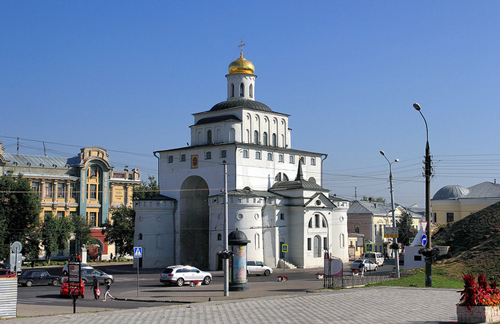 On top of the gates there's a church with a golden dome. The purpose of the Golden gates was to decorate and to protect the city: the arch used to be protected by massive wooden doors, on top of the gates there's a 'fighting' place. In 18-19th centuries, the gates were restored, partially rebuilt, and the new small castles were attached on the sides. The Golden gates are being restored at the moment, and should be finished by the end of 2001.

ASSUMPTION CATHEDRAL. It was founded by Vladimir prince Andrey Bogolubsky in 1158 on a high hill next to Klyazma river, and was meant to embody the power and importance of Vladimir-Suzdal principality. Called in Russian 'Uspensky Sobor', it's one of the most important and interesting monuments of the ancient Russian architecture.

Italian architector Aristotel Fioravanty, who built almost half of Moscow Kremlin, had studied the architecture of the Assumption Cathedral in Vladimir, and built the same kind of cathedral with the same name in Moscow Kremlin.
Andrey Bogolubsky, the founder of the cathedral, gave great importance to the cathedral, so it was painted and decorated very richly inside. Although the cathedral looks very massive from the outside, the interior is made in such way, that you won't feel the 'heaviness' inside.
During the Tartars invasions the cathedral was devastated, and only in the beginning of the 18th century, at the times of Peter the Great, it was restorated completely.
Location: facing the Sobornaya square. Phone: (0922) 22-42-63. Map: 2. Opened: 13.30-17.00, day off: friday. Entrance: 20 roubles ($0.7)

DMITRY'S CATHEDRAL. Was built during 1194-1197 to honor the 'heaven patron' of Vladimir-Suzdal prince Vsevolod 'Big Nest'.

The cathedral is built of white stone in a very interesting, skillful, and impressive way, on the walls of the cathedral you can see the fretworks depicting various Russian princes and their doings.
The lower fretworks are quite detailed and precise, the upper fretworks have less details, but deeper texture, to make them more visible. Inside, the cathedral is decorated in a light and simple manner.
Location: next to the Assumption cathedral. Phone: (0922) 22-42-63. Map: 3

THE WATER TOWER was first built in the end of the 19th centruy, and completly rebuilt in 1912. The tower is built of red bricks in 'pseudorussian' style, it has a form of a cistern and widens on the top.
After the restoration works in 1970s, the tower hosts an exhibition called 'Old Vladimir', with a great view on the historical center of the town.
Location: next to the Golden Gates, in the direction of Klyazma river. Opened: 10.00-16.00 daily, day off: monday. Map: 5

There are not many hostels in Vladimir.

Facts Vladimir region is located on the east of Moscow, between Ivanovo, Moscow, Ryazan, and Nizhegorodsky regions.

Very good option for those who are on a business trip or just prefer traveling with comfort.
Vladimir Guide:
This free independent travel guide to Russia exists thanks to the commission we get when you order these hand-picked trusted third-party services or when you buy our book. Please, support us!