Vladimir region is located on the east of Moscow, between Ivanovo, Moscow, Ryazan, and Nizhegorodsky regions.
Vladimir is the center of Vladimir region and is located 179 km east of Moscow. It lies on the shore of Klyazma river.
There are 376 000 people living in Vladimir. Impression of Vladimir Bolshaya Moskovskaya - the only lighted avenue in Vladimir along which are concentrated the city central attractions. 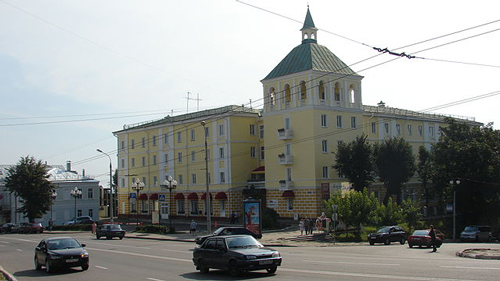 A cinema, a theater, a book shop, food shops, a supermarket, museums, restaurants, casinos and night bars, churches, two hotels... People from the whole Vladimirskaya region come to this street either to go to the movies, or to party on weekends, to buy food in the supermarket or simply to walk around the touristic St Dimitry's dome church. Around Bolshaya Moskovskaya, a big contrasted provincial city. Take any of the parallel streets to Bolshaya Moskovskaya, you'll see wooden countryside houses neighbouring more modern buildings, alleys of trees, and views on the fields beyond the river Klyazma.
This free independent travel guide to Russia exists thanks to the commission we get when you order these hand-picked trusted third-party services or when you buy our book. Please, support us!
russian visa
train tickets
guide book
hotels
car rentals
travel insurance 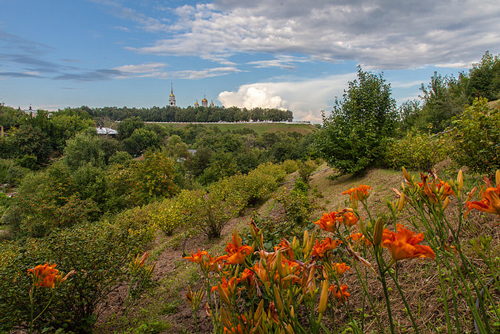 It feels nice and peaceful until you look a bit closer. Garbage is scattered in most of the green places, dirty children are sleeping outside and are trained to ask for money next to touristic sights, the large river - Klyazma nobody would ever dare to swim in it. And as you go towards the outskirts of the city by bus, grey buildings and factories slowly fill in the space. So Vladimir looks like a typical polluted industrial and rural Russian town, where the people all gather on the central old street to find entertainment. 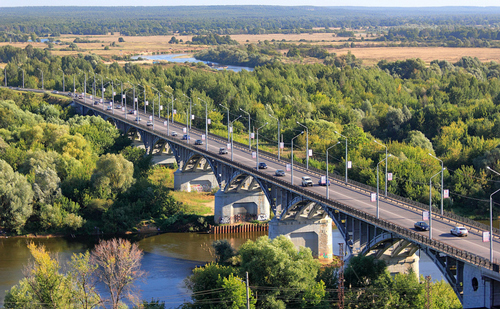 Vladimir is one of the oldest Russian cities, was first mentioned in 1108, when the price of Rostov-Suzdal land Vladimir Monomakh decided to fortify the shores of Klyazma river, and founded a town at a place of a small village, giving it his name. The capital of Rostov-Suzdal land was Suzdal (now a small town, 38 km north of Vladimir), and in the 1157 the capital was moved to Vladimir. That's when Vladimir started to gain importance, and in the city was being decorated.

The Golden Gates were put at the western entrance of the city, the impressive Assumption cathedral was built, embodying the power of Vladimir-Suzdal principality.
In the beginning of the 13th century, when Russia was invaded by Tartars, Vladimir was devastated.
Vladimir started to lose its importance in the beginning of 14th century, when the Mitropolit of the 'Whole Russia' moved his residence to Moscow.

What to Do in Vladimir

Usually the Golden Ring tour buses come to Vladimir through the famous Golden Gate, stop on the main Sobornaya square to decharge their lot of tourists in front of St Dimitry's and Assumption cathedrals, then they continue their way to the more picturesque Suzdal. But there's more to Vladimir, than the famous churches and some museums that can tell you a lot about the history of old Russia: the town provides interesting insights on provincial Russian life. Don't limit yourself to just a few churches and museums, anyway, for the architecture you can visit the nearby Suzdal. 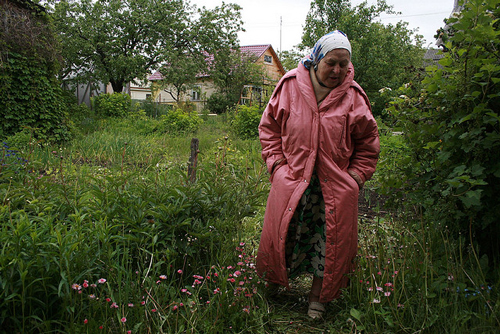 It's much more interesting to just walk around the main avenue, and see how people look and how they live, take some side streets and stroll along quiet residential areas in the center and the outskirts. A young artist and restaurator, who, being a bit drunk on Saturday night, helps you to find a way to your hotel and talks incessantly, two old women walking around the famous cathedrals, talking about how it was before, and adoring their town, a family having a picnic on a small field overlooking the railway and Klyazma river, young people spending their time drinking beer and vodka next to the one of the main attractions - Water Tower, a street market set up by babushkas selling home-grown veggies, next to Zolotoe Koltso hotel in suburbs.

Vladimir is an industrial town: there's a big chemical plant on the eastern side of the city, which produces polyethylene, films, and other stuff. Because of that, Vladimir is quite polluted, but less than Moscow, for example.

There are many homeless people on the streets, that ask for money next to the main touristic attractions. 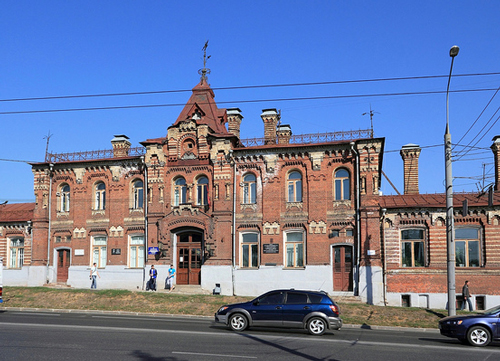 Young people spend their time walking around the city, having picnics in the parks, going to the cinema, hanging out in bars and discos. On Saturday night the city rocks: most of the people go out on Bolshaya Moskovskya street, where most of the night clubs, bars, and casinos are located. They like drinking beer in bars, singing silly Russian karaoke songs, playing billiard and casinos. There's some movement on the main street until 2am, consisting mostly of drunk people, and then it slowly sweeps away.

There are not many hostels in Vladimir.

The Golden Gates The Golden gates were built at the western entrance to Vladimir in 1164, when Vladimir-Suzdal principality was ruled by Andrey Bogolyubsky.

Very good option for those who are on a business trip or just prefer traveling with comfort.
Vladimir Guide:
This free independent travel guide to Russia exists thanks to the commission we get when you order these hand-picked trusted third-party services or when you buy our book. Please, support us!