Author: Maria Mushtrieva (on 08 Sep 2015)
Tweet
Yaroslavl is quite big city 260 kilometers north of Moscow. There are 630 000 inhabitants in the city. The main industries are machinery and oil industry, there's one of the biggest oil companies 'Slavneft' working there, so the city is quite polluted.
Since the ancient times there were settlements of Finn-Ugor tribes assimilated with the Slavs at the junction of Volga and Kotorosl rivers. In the beginning of the 11th century Yaroslav Mudry ('Wise') founded a fortress here, which he called 'Yaroslavl'. 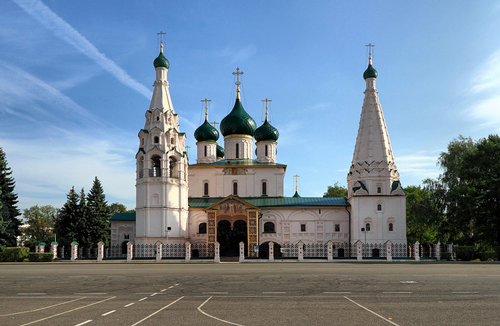 Because of its favourable location on the river, the town became an important trade center in the beginning of the 13th century. At the times of Tartar invasion (13th-14th centuries) Yaroslavl was burned and demolished, but in the 15th century it was mostly restored and rebuilt and became an important commercial center again, for a period of time it was the second richest and powerful city in Russia, after Moscow.

Getting to and from Yaroslavl

DudkiBar is a quite decent place to have a drink.
Yaroslavl Guide:
This free independent travel guide to Russia exists thanks to the commission we get when you order these hand-picked trusted third-party services or when you buy our book. Please, support us!