Tweet
Kaliningrad Stadium also called as Arena Baltika is situated on Oktyabrsky Island in the heart of the city. The stadium will host four games during FIFA 2018. 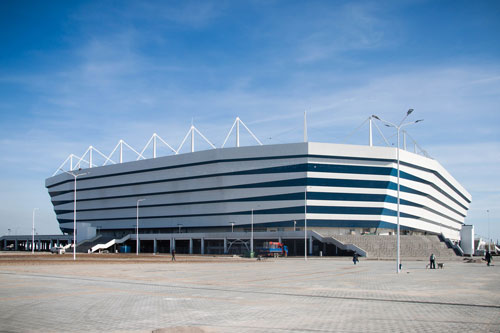 The selection of Kaliningrad as a host city has impelled local authorities to develop the island, which for many centuries has been a wilderness, left largely untouched. After the 2018 World Cup, a new residential development will be built around the stadium, with parks, quays and embankments alongside the Pregola river.

Kaliningrad Stadium is located only 45 kilometers from the border with Poland (Warmian-Masurian Voivodeship), which makes it the stadium the closest to the European Union and the Schengen Area during FIFA 2018.

How to get to the Stadium

Kaliningrad Stadium is located just west of central Kaliningrad on Oktyabrsky Island in the Pregolya river.

Kaliningrad Stadium also called as Arena Baltikawill host four games during FIFA 2018 on June 16th, 22nd, 25th and 28th.
FIFA 2018 Guide:
This free independent travel guide to Russia exists thanks to the commission we get when you order these hand-picked trusted third-party services or when you buy our book. Please, support us!