Tverskaya is the main street of Moscow, it starts from the Kremlin and goes north through all Moscow to change into Leningradskoe shosse, which leads to Tver and after 700 km to St. Petersburg. Tverskaya street is a wide central avenue bustling with life, with large buildings on the sides where there are various shops, clubs, cafes, and restaurants inside. However, the life around Tverskaya (small streets, boulevards around) is quite calm, and it's one of the nicest areas to walk around or to go out in Moscow.

About 300 years ago Tverskaya was the area where rich Moscovitans liked to build their residences. There were many beautiful buildings on the street, boasting great architecture and beautiful interiors. The street was quite narrow, but very long, even in the old times. In the 20th century, during the communist reign, all the buildings were taken from the nobles, and most of them were destructed and rebuilt in the new 'Stalinist' monumental style. There was a need to widen the street, because it was so central. Nobody knows for sure how they did it, however most of the people say that Soviet engineers put all the buildings on steel balls and actually 'rolled' them away from each other. 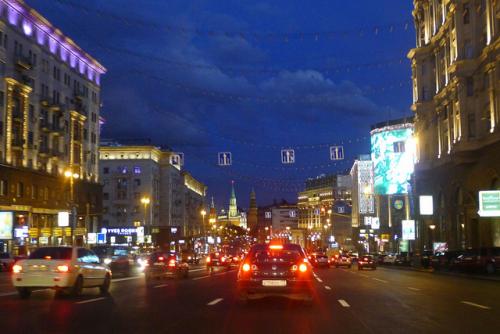 A nice area to walk around is Tverskoi Boulevard, which is just outside metro Tverskaya (green) or Pushkinskaya (violet) exit. This boulevard used to be the favourite walking street for Moscow intellectuals and elite in the 19th century. There's even a monument to the two Russian poets who liked to walk there: Pushkin and Esenin.
Pushkinskaya square (metro Pushkinskaya, Tverskaya, Tchekhovskaya) is the heart of Moscow entertainment: if you are not sure what to do, start from here. At least you're next to the major metro hub.

The Hermitage garden (metro Tchekhovskaya -grey line) is the home for New Opera house, and a refreshing green place in the busy Moscow centrum.
Another famous area is Patriarshi Ponds (metro Mayakovskaya (green) or Tverskaya), where Mikhail Bulgakov's 'Master and Margarita' novel took place. The ponds, now an expensive residential area and a favourite hangout for Moscovitans used to be a swamp and a gazing field for goats 200 years ago. Also, between Patriarshi Ponds and Tverskaya street, there are many buildings made in 'Art Niveaux' style.
Mayakovskaya square (Mayakovskaya metro) is a smaller variant of Pushkinskaya square: also many places to eat, cafes, some interesting contemporary art and photo galleries.
Novoslobodskaya area is a quiet residential area in the centrum, so there are many supermarkets, small restaurants and shops.
Belorusskaya square is a one of the main transport hubs, there's Belorusski railway station, some expensive hotels, and a lot of cafes. That's where Tverskaya changes into Leningradki prospekt, that leads to the direction of Sheremetyevo II airport and St Petersburg.

Also, it a great idea just to walk around many streets around Tverskaya. They are really diverse and give some special feeling of Moscow: clean, dirty, strange, quiet.

The best way to explore Moscow is to go for a walk in one of the central neighborhoods or parks.

Kuznetski Most area in Moscow

Kuznetski Most is a small area between Tverskaya street, Kremlin, and Kitai Gorod (Lubyanka) and it's a downtown of Moscow.

Apart from Gorky Park, which is not too close to all the good places in the center, Hermitage Garden is perhaps the biggest green area in the very center of the city, although it’s actually quite small.
City Walks & Areas Guide:
This free independent travel guide to Russia exists thanks to the commission we get when you order these hand-picked trusted third-party services or when you buy our book. Please, support us!