Internet access, traveling with a laptop in Russia - Way to Russia Guide
Way to Russia >> Practicalities >> Communication >> Internet and WiFi

Author: Dimitry Paranyushkin (on 26 Aug 2018)
Tweet
Internet coverage in Russia is really good: most mobile operators offer 4G / LTE fast-speed internet in most cities and towns, Wi-Fi is available in most public places for free. The only problem is that the local internet authority (RKN) blocks access to some internet resources and because of that some of the legit websites won't work (sometimes even Google and Dropbox). So you're better off getting a VPN subscription (read more about it below) — this will help you avoid the disruptions and you can also use it to better protect yourself on public wifi networks that are not protected from eavesdropping.

If you're using your own phones / tablets / computers, they probably have wifi enabled, so you'll be able to connect in most public places in Russia. At places like airports, Moscow metro and big chain restaurants you'll need to provide your cell phone number and enter a confirmation code sent to you by SMS in order to access the wireless network, so make sure your phone is working or get a Russian SIM card. The reason for that is that they're required by law to have your details if they provide you the access (officially for anti-terror threats)
If you're connecting at a smaller place that has a wireless hotspot, they'll usually have it password-protected, because it is more secure this way for users as well. Usually asking a manager for a password works. Check out our list of some internet hotspots in Moscow and St. Petersburg. A great place to surf in Moscow is the new Zaryadie park next to the Red Square — it's covered with Wi-Fi and is a good place to chill
If you're interested in finding wi-fi hotspots in other Russian cities, please, see our Destinations guide. The hotspots are usually listed in Practicalities section of the respective city guides and you can almost always get a signal at hotels.

The best way to access the internet in Russia is to get a local Russian SIM card. You can install it into your smartphone or get a cheap wireless pocket modem at any telecom shop (from €40) and enjoy very fast internet in most city areas (realistically up to 20 Mbs).

If you stick to the big cities, MTS operator has a good quality and a reliable network, but the coverage in small towns and on the train / road routes is not that good.

For extensive coverage get BeeLine — they offer 3G almost anywhere and their 4G works in major cities including some areas at Baikal.

MegaFon is also quite good and works all over Russia: especially good and fast in big cities and they have very competitive packages.

Finally, Tele2 has a sub-operator called SkyLink, which offers internet access in big cities and in remote areas. You can get their pocket modem for €40 and unlimited Gigabytes for about €15 a month on pay-as-you-go contract (no lock in) and they will get you fast internet speeds even at Baikal lake in Siberia as well as some other remote areas in the Russian north. 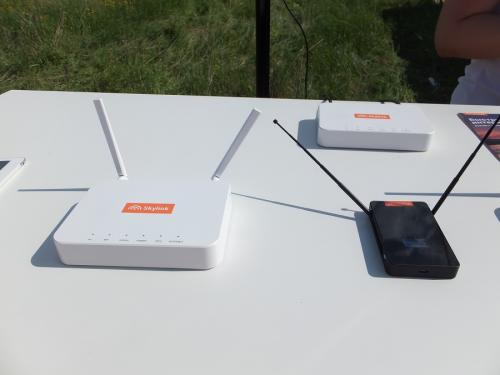 Russia has strict laws about internet content, but it does not block as many websites as Germany, for example. However, when they do, RKN (the internet authority) does it in somewhat peculiar style sometimes blocking parts of the whole internet, so you might not be able to access popular resources like Google, Gmail or Dropbox. This doesn't happen too often, but if you would like to avoid this trouble, you should get a VPN server. You will also need it if you want to use Telegram messenger, which is quite popular in Russia even though it's being constantly blocked (Russian people use it in spite of).

There are some free VPN options, such as Opera VPN app, which you can install for free on your phone, but it might not be always reliable (as RKN blocks it as well). A safer option is to get a paid subscription from a dedicated VPN provider. You can see a good comparison chart here, which takes into account the privacy laws in the country of origin and various other criteria, such as the number of servers and countries offered (you can "pretend" you're in Sweden or USA when you browse the internet using VPN).

VPN can also protect you from eavesdropping on unprotected Wi-Fi networks. The thing is that if you're browsing on a wireless network that doesn't have a password, anybody with a bit of skill can listen to all your communications and intercept sensitive data like the passwords you use for your emails and other stuff. If you're using VPN all your traffic is usually encrypted by default (you should check that with the VPN provider).

High-speed (broadband) internet services are provided by LAN (local area networks) and ADSL providers almost in any Russian city. Moscow and St. Petersburg also have cable TV providers that offer internet connection.
To get connected to ADSL, you should contact the provider and give them your address. Russia is a big country, so different telecom companies will be providing connections in your area, depending on where you live. Within two weeks they're going to set up the connection (which usually costs about $50-$100 with equipment, if it is needed), and you will be able to start using the internet. The prices for traffic vary, but most ADSL providers offer unlimited traffic with 10 Mbs speed for about €10-€20 per month. There are no long-term contracts, in most cases you can cancel your subscription with 1-month notice.
Most LAN providers can set up the connection faster (they will just put the Ethernet cable through to your apartment), but the charges will be higher than ADSL and you will need an Ethernet card already installed in your computer. However, this may be a good option if you don't have a landline in your apartment or don't want to use ADSL for some reason.
The main ADSL provider in Moscow is Rostelekom They offer connections up to 150 Mbit/sec and the quality is quite good. Both USB and Ethernet modems can be used, but if you want it to be compatible with a Mac it's better to go for a slightly more expensive Ethernet version. However, they may be not so easy to deal with. So if you're ready to cope with speeds up to 50 Mbit/sec then it's much easier to get a router from one of the mobile operators, such as MTS (for a big city) or BeeLine (for smaller towns) and Megafon or Tele2 (mobile routers for traveling).

If you need to send something from or within Russia there are several options to choose from: the government-owned Russian Post (Pochta), the local courier companies, and the international delivery services.

Using your own sim card in Russia is not an option: you'll be ripped off on roaming charges (unless you get a travel sim).

There's a little complication in Russia with phone numbers because the old system used 8 instead of the +7 country code.
Communication Guide:
This free independent travel guide to Russia exists thanks to the commission we get when you order these hand-picked trusted third-party services or when you buy our book. Please, support us!