Author: Dimitry Paranyushkin (on 02 Oct 2019)
Tweet
Russia is a relatively safe place, but sometimes there may be annoying situations. For example, how do you deal with the cops who want to get a bribe, because you don't have a visa registration? What to do, so you don't get in a fight? How to deal with customs and border control? Here's some examples...

Situation: LOST YOUR PASSPORT AND YOUR RUSSIAN VISA

What to do: It's better to be very careful and not to lose the passport with a visa, but if that happened, you should do the following procedure:
1. Go to any police station around the area where your passport was lost and get a special paper, which says that your passport was indeed lost (it's called "spravka" in Russian). It is very important to get the spravka, otherwise, you won't be able to have the new visa issued.
2. Make sure you still have your plane ticket with the date of return. If you don't, book a new flight and get the printed confirmation of booking. You can do it in any airline's office.
3. Make some passport size photos on a special matte paper - available in any photo places. The photos made in photomachines at the metro stations won't work.
4. Go to your embassy to get a new passport (you should contact the embassy just after you lost the passport to start processing). See the list of foreign embassies in Moscow and in St. Petersburg.
5. Try to find a copy of your lost visa or at least of the invitation letter.
6. Take all the documents and papers listed above (the spravka from police, your plane ticket, photos, new passport, copy of your lost visa (if you have one)) and take it to the office of the travel agency that issued your visa support. Usually, it's the same office where you had to make your visa registration. You will be fined about $150 US by immigration officials and, if everything will go allright, you'll be given a new visa in a few days (about a week).

Situation: RUSSIAN CUSTOMS TRIES TO RIP YOU OFF

What to do: These things were happening some time ago, and everybody was talking about it. Recently, Russian parlament introduced a new law, so you can forget about these problems.
According to the new regulations you can bring in Russia up to $3000 US in cash (or equivalent) without declaring it at all (that is, you can go through the green corridor when you arrive and not fill in the customs declaration form). If you have between $3000 and $10000 in cash, you should fill in the customs declaration form, declare this money when you come in and come out of Russia.
Also, there are now customs information desks in Sheremetyevo 2 international airport, so in case you have any questions, they can be resolved on the spot.

Situation: GOT INTO POLICE CUSTODY

What to do: Normally, you won't get into trouble with the police unless you commited a small infringement or a crime. You should know your rights and calmly show the policemen that you know them. Be polite and try to explain that you would like to resovle the situation to everybody's satisfaction. Unfortunately, policemen often accept bribes.
If you want to show to police that you know the laws, you may refer to them directly, so it's better to know at least the reference number. For example, here you can read about the basic laws concerning visa registration.
According to Russian laws (Administrative Codex, Federal Law #195-FZ, issued on 30 Dec 2001), the police might take somebody to a police station for not longer than 3 hours in case they suspect that this person comitted a crime or an infringement and would like to check his personality or/and to give this person a fine. The police do not have a right to detain somebody for longer than 3 hours, unless there's a difficulty in learning who the detained person is (for example, he doesn't have a passport and doesn't answer any questions) or in case it is proved that he comitted a crime for which he should be detained. In that case the person can be detained for not longer than 1 day.
A person can be arrested (detained for a long period, but not longer than 15 days) in extreme cases, but only after the judge's decree.
Here's a list of some common infringements and penalties:
• Not having a visa registration 72 hours after arrival (Regulating law: Adminitstrative codex, Federal law #195-FZ, Article 18.8. Penalty: detainment for not longer than 3 hours, a fine 1000R ($30 US) with a possibility of being sent out of Russia (though, little, because it can be ordered by a judge only).
• Demosntratively disturbing the public order (that's when you shout offensive words to the others, or make sex in front of everybody, or tell the policeman to fuck off, or piss on the street in front of everybody etc.). Regulating law: Adminitstrative codex, Article 20.1. Penalty: a fine from 500 to 1500 R ($15 to $50), in some really bad cases detainment (arrest) for up to 15 days.
• Drinking vodka in public places (or something else where there's more than 12% of alcohol). Regulating law: Administrative codex, Article 20.20. Penalty: a fine from 200 to 500 R ($7 to $15).
• Being heavily drunk in public places (and harassing everybody). Regulating law: Administrative codex, Article 20.21. Penalty: a fine from 100 to 500 R ($3 to $15) or detainment (arrest) for up to 15 days.
• Carrying marijuana or hashish. Regulating law: Russian Government Decree #231 (effective 6 May 2004), Criminal Codex articles 228, 229, Administrative Code article 6.8. Russian Government Decree #231 came into effect on 6 May 2004, which regulates the amount of drugs or psychotropic instances for personal use.
The law allows a certain amount of substances (used in medicines, drugs, etc.) which are allowed for personal use.
Now, if a person is carrying a "personal" dose of a drug (up to 2 grams of marijuana, up to 0.5 grams of hashish) and this amount is believed by the police officer to be for personal use, the person can not be criminally prosecuted. Maximum penalty in this case is a fine 500 to 1000 Rubles.
If a person is carrying 10 or more "personal doses" of a drug or a psychotropic substance (equals 20 or more grams of marijuana, or more than 5 grams of hashish) he/she will be criminally prosecuted, the maximum penalty is 7 years in prison.
It is forbidden to bring in any drugs or psychotropic substances in Russia.
If you are interested whether you can bring in a medical supplement which contains some substance you believe may be restricted in Russia, you should check with the Decree #231 if the amount is acceptable.
Also, note, that Russian police and officials often do not know the laws very well, so you may spend a few months in prison before they find out that they are not right. 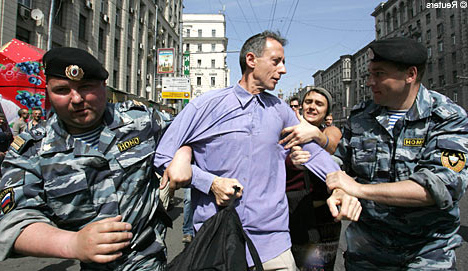 Situation: CAN'T FIND WHERE TO LIVE

What to do: You need to find a hotel that is big enough to have free space all the time. First, try all the hotels listed in Accommodation section of our city guides. If there are no vacant rooms, ask them if they can recommend anything.
If it doesn't help, get yourself any yellowpages directory and look for Hotels in there. Also, try to get some English-language newspapers, like Moscow Times in Moscow or St. Petersburg Times in St. Petersburg and see theadverts there.
If that didn't work and it's already the nighttime, you can go to a club that has a dark chill out room and to sleep there (leave your luggage at a railway station locker beforehand). If you don't feel like sleeping, you can also go to a 24 hour internet cafe (there's one in almost every city)..
This free independent travel guide to Russia exists thanks to the commission we get when you order these hand-picked trusted third-party services or when you buy our book. Please, support us!
russian visa
train tickets
guide book
hotels
car rentals
travel insurance

The state health system in Russia in general is far from being good, but it is not as bad as one could imagine and it's free.