Author: Dimitry Paranyushkin (on 04 Feb 2015)
Tweet
St Petersburg is very well connected to Moscow, Baltic States and Scandinavian countries. The easiest way to get here is by train or bus from Finland or Estonia. There are also many daily trains between St. Petersburg and Moscow, which take from 4 to 8 hours. St. Petersburg's only airport - Pulkovo - has two terminals and is in deep need of renovation. There are also many cruise ships and several interntional ferries stopping at the city's port, which is quite well connected to the center. Here is some basic information you need about the city's airports, train and bus stations, and ports.

Pulkovo is located about 20 km south-west from the city center. There are two terminals. Terminal 1 serves mostly domestic flights and terminal 2 is an international airport located about 5 km away from terminal 1 (10 minutes by shuttle). Both airports are not that impressive and there is no express train to the center of the city (about 40-60 mins by car). But you can take city buses №39(Pulkovo I), №13(Pulokovo II); shuttle buses (from Pulkovo I shuttle №К39, from Pulkovo II №K3, 39A, K113) to Moskovskaya metro station or get a taxi (which is pretty expensive starting at $30-$40). In the arrivals halls of both terminals there are also representatices of car rental companies HERTZ, Avis and SIXT (for more information about car rental services check out our Getting around St. Petersburg  guide).

There are 5 train stations in St. Petersburg, all of them located in the center, near the metro stations, and are easy to access. The area around the stations is not the most secure, but is not dangerous as well. Never take a taxi from the railway stations as you will most likely be overcharged 2-3 times. It makes more sense to order a taxi beforehand or to walk 5 minutes from the station and wave down a car.
Tickets for immediate departures can be bought at the train stations. It usually takes about 10-20 minutes to buy a ticket for a long-distance train, and 5 minutes to buy a ticket for a suburban train. You need to show your passport to buy a long-distance train ticket. You can also buy a train ticket at Railway Agency -- a central train tickets booking office. Open: 8.00 - 20.00 sun 8.00-16.00. Address: Griboedova Channel, #24, tel: (812) 162-3344. If you're buying a ticket in advance, it can be done directly at a train station, travel agency, or in the internet. To choose suitable trains check out this page on WaytoRussia . For more detailed information about Russian Railways go to their webiste  (in English).
Moscow Station (Moskovsky Vokzal).
Directions to/from: Moscow, Novgorod, north of Russia (Arkhangelsk, Petrozavodsk, Karelia, Murmansk), Urals (Ekaterinburg), South Russia (Krasnodar), Central Asia (Kazakhstan, Uzbekistan, Turkmenistan), Caucasus (Azerbaidzhan, Armenia, Georgia), Crimea.
There are lots of trains to Moscow. they depart almost every 20 minutes. Some people find night trains the most useful. The whole trip to Moscow takes around 8 hours, so if you leave in the night you will be in Moscow in the morning. There are also faster trains called "Sapsan" that make the trip from St. Petersburg to Moscow in 4 hours. They are nicer and more comfortable too and therefore cost more money.
Address: Ploshad Vosstaniya, # 2. Metro: Ploshad Vosstaniya. 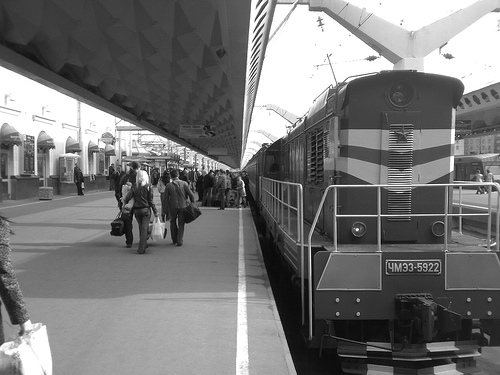 Buses to Finland. Citizens of St. Peterburg love to visit their Finnish neighbours for vacation, skiing, shopping and openning their Shengen visas, so there are dozends of companies that provide buses, minibuses and taxies to different parts of Finland. While taxies will pick you up from your place, buses and minibuses depart from Oktiabrskaya Hotel (Ligovsky pr., 10, near pl. Vosstaniya metro station) either in the evening between 21.00 and 23.00 or in the early morning. It's better to book a seat in advance contacting one of these companies: Comfort Travel + 7 812 920 65 87, +7 921 375 87 68, internet:www.com-travel.ru. AMG Travel+7 812 716 02 44, +7 911 920 02 44, internet:www.amgtravel.ru . It might also work out if you just show up at the buses' hang-out near Oktiabrskaya Hotel.

International. There are regular ferry services provided by St. Peter Line  from St. Petersburg to Stockholm and Helsinki. International passenger ferries leave from the newpassanger port Marine Facade . Address: Ul. Nevskoi Gubi, 1D. tel.: +7 (812) 303-67-40.
Note: if you come to and leave St. Petersburg on one of the cruises you can stay in Russia for 24-72 hours without getting a visa.

Getting around St. Petersburg by metro, public transport, taxi, rent-a-car.

St.
Transport Guide:
This free independent travel guide to Russia exists thanks to the commission we get when you order these hand-picked trusted third-party services or when you buy our book. Please, support us!