Getting to and from Ekaterinburg

The Ekaterinburg train station is located about 2.5km north of the city center. A bustling place, it has decent facilities but the crowds are irritating. Being a major transport hub, it is easy to get to Ekaterinburg by train from most major Russian cities. From Moscow the quickest and nicest train is number 016E, which travels via Kazan, takes 25 hours and costs about  €34 3rd class, €95 2nd class and about €140 1st class.
Another option is to take one of the Trans-Siberian trains such as the Rossiya (002) which takes about 25 and a half hours but is a little more expensive. There are numerous other trains to Ekaterinburg each day that continue on to places like Barnaul, Tomsk, Krasnoyark and Irkutsk.
From St Petersburg there is one daily direct train (072E) which goes via Vologda and Perm, takes about 37 hours and costs about €39 3rd class, €115 2nd class or €172 1st class. The return journey is numbered 071E. There are other trains that travel the route but don't have Ekaterinburg as their final destination. These are sometimes a bit faster.
Other destinations that can be easily reached from Ekaterinburg include Novosibirsk, Irkutsk, Omsk, Ufa, Kazan and Samara. See "Getting Around Ekaterinburg" for information on public transport routes to and from the train and bus stations.
Address: 22, Vokzalnaya Street, Tel.: +7 (343) 358-32-10 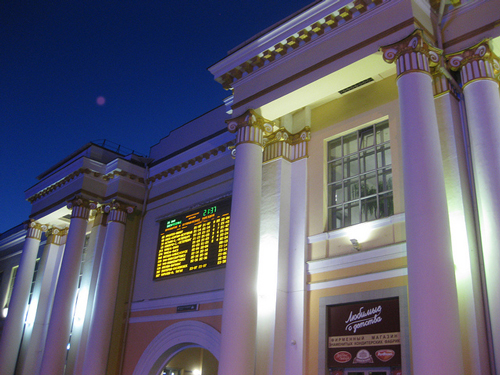 Ekaterinburg has two main bus stations, named north and south. Both are pretty basic places although the two-storeynorthern bus station has an ATM, cafe and a few shops. The southern bus station has a cafe. There is also a bus station near the airport which has buses to neighboring towns. Unfortunately there is no clear separation of the places each bus station services, so you're likely to find your destination at either one. Often inter-city buses will stop at both anyway.

Chelyabinsk is a comfortable distance from Ekaterinburg by bus ш about 3 hours journey with tickets costing around $6. Buses to Chelyabinsk depart every 30-50 minutes between 6am and 7pm from both bus stations.

There are flights to Ekaterinburg from St Petersburg more or less every day for a little bit more: about €80 return is a standard price. There are also flights most days to Novosibirsk, Irksutsk and Samara. A number of other destinations within Russia are also serviced on a less regular basis.

The center of Ekaterinburg can be covered quite easily on foot. But you will need to use public transport to get between the center and the train station, bus stations or airport. It can also be useful if you're tired after a long day of sightseeing.

The Ekaterinburg currently has just seven stations and one line, running north-south. But there are plans to extend this line and add two new lines running east-west and south east-north west. The trains are of similar vintage to those in Moscow but are cleaner. Some of the stations are quite pretty so it's worth taking a trip just to see them.
One trip on the metro costs 14R (€0.20). Trains come about every six minutes during peak hours. There are ATMs in all the metro entrances. The most useful stations are Uralskaya (next to the northern bus station, about 200m west of the train station), Ploshchad 1905 Goda (right in the city center, entrance on 8 Marta Ulitsa) and Geologicheskaya (at the south of the city center, at the intersection between 8 Marta Ulitsa and Kuibysheva Ulitsa).
The metro is best used for traveling between the center and the train station or northern bus station. It can also help in getting between the south of the center (Geologicheskaya), where there are a few hotels, and the north of the center (Ploshchad 1905 Goda), where the main city square and streets are located. 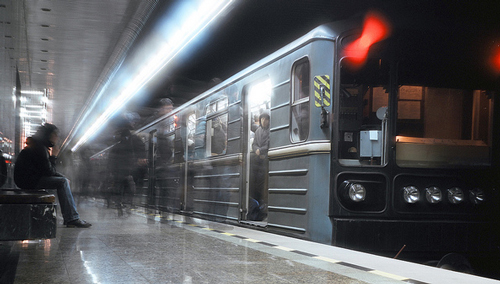 Trolleybuses 1, 23, 31 and 71 go from the train station to the center, as do buses 1 and 9. Trams 21, 27 and 32 go to the center from outside the Hotel Sverdlovsk across the square from the train station (tram 32 goes to the very center). Quite a few of the other trams do as well, but they take a roundabout route. Metro Uralskaya is about 200m west of the train station. From there it is two stops to the center (metro Ploshchad 1905 Goda).
Use any of the public transport listed above to get to and from the northern bus station. To get to the southern bus station take trolleybus 11 from the train station, buses 20, 030 or 57 from 8 Marta bus stop (on the corner of Prospekt Lenina) or trams 1, 5, 15 or 27 from metro Geologicheskaya. Bus #1 goes from the train station to the airport. Marshrutka #26 goes from Ploshchad 1905 Goda to the airport while Marshrutka #39 goes from the circus (metro Geologicheskaya) to the airport.
Some other useful routes include Trolleybus #7, which runs the length of Malysheva Ulitsa, while buses #24 and #8 run the lengths of Prospekt Lenina and Kuibysheva Ulitsa respectively. For north-south travel Bus #20 runs the whole length of 8 Marta Ulitsa while trolleybuses 1, 5, 9 and 11 dissect the city, running from the top of Sverdlova Ulitsa, along Karla Libknekhta, Rozy Lyuksemburg and Belinskogo streets.
Any of the city's trams will eventually end up somewhere in the city center (so long as they're traveling in a vaguely correct direction) but they might go on a fair excursion around the northern or western side of the city first. Tickets on these forms of public transport cost 14R (€0.20) and can be bought on board. There are some maps of the public transport routes on the Ekaterinburg Tourist Information Service website, which might be useful if you can decipher them: http://its.ekburg.ru/eka/454/507/

This club / restaurant / loft has the same art director as Denis Simachev bar in Moscow, which is one of the best venues in town because it is authentic in its desire for luxury and unabridged fun.

Going Out & Sightseeing in Ekaterinburg

There are some places in Ekaterinburg you cannot miss.

Antei Lookout and business center has a 273 meter high rooftop lookout that offers stunning panoramic views of Ekaterinburg.
Ekaterinburg Guide:
This free independent travel guide to Russia exists thanks to the commission we get when you order these hand-picked trusted third-party services or when you buy our book. Please, support us!