What is Krasnoyarsk - Facts about the city

Krasnoyarsk is located 4065 kilometers from Moscow along the Trans-Siberian railway. It takes about 2 days and 10 hours to get there from Moscow by train and about 4.5 hours by plane.
Krasnoyarsk is the center of the vast Krasnoyarsk region, it is the second biggest city in Siberia after Novosibirsk and a powerful industrial center. There are about 950,000 inhabitants.
Despite that Krasnoyarsk is a very pleasant city and we definitely recommend you to stop there for a day or two on your way along the Trans-Siberian. Near Krasnoyarsk (20 mins by car from center) there's a national park Stolby - a very diverse natural area with unusual cliffs. 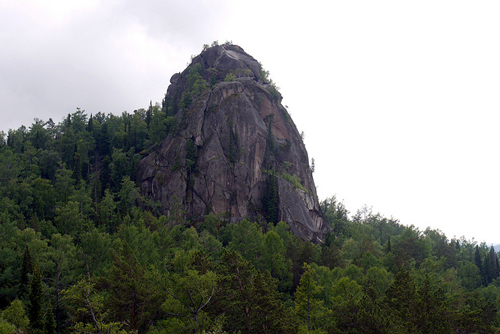 Also, Krasnoyarsk can be a good starting place for trips in Khakasiya and Tuva.
The city also amazes with the hospitality of local people — a typical Siberian trait, but especially evident in Krasnoyarsk. Everybody: from a bus conductor to a stranger on the street seem to want to make you feel good and proud of their city. 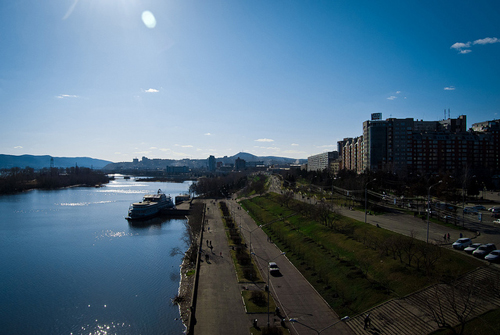 Krasnoyarsk lies along Enisey river — one of the most beautiful and powerful rivers of Siberia. It is surrounded by mountains, giving a very interesting flavour to the city views.
If you have only a few hours between trains in Krasnoyarsk, you can walk around the city center. The infrastructure is well-developed and there are a lot of cafes, restaurants, and a few 24-hour internet cafes. 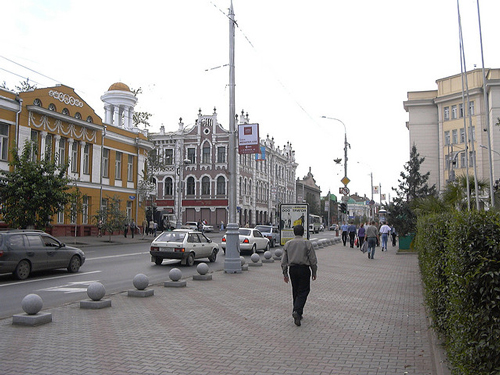 If you have more than 1 day, you may consider going to the national park Stolby, giving yourself a nice fresh-air break from train journey. Siberians say that Stolby are more impressive in winter than in summer and there is a great alpin base for skiing.

The history of Krasnoyarsk counts back to the year 1628 when it was founded by the cossack Andrey Dubensky. At that time it used to be a local center and was an important transport hub for river transport (Enisey river goes up to North ocean). 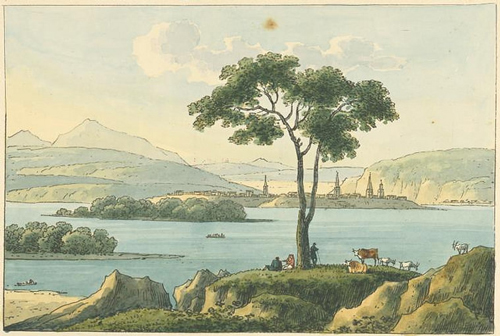 During the XIX century it was an important cultural center of Siberia: in the end of 1880s the Regional Studies Museum was opened: one of the most important ethnographic and archeology museums in Russia. The Trans-Siberian road passing through Krasnoyarsk gave a boost to industrial development of the city, especially metal production, oil, and construction industries.

Krasnoyarsk is also famous because of general Lebed, who was the governor of Krasnoyarsk region in the end of 90s. He died in a helicopter crash in 2002, but local people respect him and relate a lot of improvements in the city life to his governance.

If you have some time inKranoyarsk and got tired of the city center, you can walk from the railway station along Yenisey river and to the 350-year Anniversary square (located opposite of Krasnoyarsk Hotel).

Krasnoyarsk is famous for the national park "Stolby", which is located just 20 minutes by car from the center of the city.

Going Out, Eating Out & Sightseeing in Krasnoyarsk

Perhaps, the best thing to do in Krasnoyarsk is to just walk around, to see a couple of exhibitions and definetely try to find the time to visit Stolby National Park (the nature is really astonishing).
Krasnoyarsk Guide:
This free independent travel guide to Russia exists thanks to the commission we get when you order these hand-picked trusted third-party services or when you buy our book. Please, support us!