Tweet
The main place for all FIFA matches is Fisht Stadium. 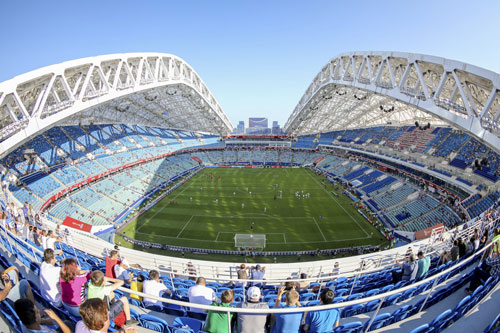 Located in the Olympic Park in Imeretin Valley in Sochi, Fisht Stadium was built for the Winter Olympics in February 2014, and hosted the opening and closing ceremonies.

Fisht Stadium was originally named after Mount Fisht, a peak in the Caucasus range of mountains and it has 40,000-capacity. After the Olympics it was reopened again 2016 to host football matches as part of FIFA Confederation.

How To Get to Fisht Stadium

Fisht Stadium is located in the Olympic Park, and the most convenient transport from Sochi and Adler is the commuter train.

The Sochi Olympic Park offers a unique combination of modern sports facilities and the natural beauty of the Black Sea coast.

FIFA 2018: Stadium And How To Get Around in Sochi

For FIFA 2018 we have collected some essential information how to get the most of it.
FIFA 2018 Guide:
This free independent travel guide to Russia exists thanks to the commission we get when you order these hand-picked trusted third-party services or when you buy our book. Please, support us!