Introduction to the Trans-Siberian Railway

Author: Dimitry Paranyushkin (on 14 Apr 2015)
Tweet
Trans-Siberian railway (usually called TransSib) is the world’s longest and the most famous train route. It crosses the whole Russia, starting in Moscow, passing through the European Russia, crossing the Urals mountains (which separate Europe and Asia), spanning further into Siberia’s taiga and steppes, ending in Vladivostok — the Russian Far East port on the Pacific Ocean. A part of the Trans-Siberian also branches down from Eastern Siberia (after Baikal lake) to Mongolia and China, finishing in Beijing.
Trans-Siberian is not just a railway, it’s an experience, a condensed version of life in somewhat extreme but comfortable and even amazing setting. That’s why TransSib is something people want to do at least once in their life: it’s comparable to climbing a mountain or going to a meditation retreat. Except that in the case of Trans-Siberian railway the adventure is aided by infrastructure, it also has several degrees of comfort (a brief hello from capitalism), and is not a solitary but a truly collective experience – a very 21-st century way of engaging into a spiritual quest. 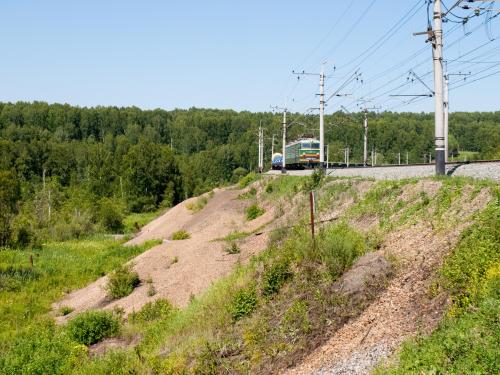 This metaphor has been elaborated by Victor Pelevin in his short story called “Yellow Arrow”. A train is moving through the endless landscape, the passengers and busy with their everyday chores, eating, sleeping, playing cards, drinking vodka, selling stuff to each other, and having occasional philosophical conversations.
Some people start wondering what’s outside of their carriage and what it is like outside of the train. Some venture to explore and find that not all carriages are the same: the posh ones towards the front of the train are more quiet and comfortable, the poor ones towards the end have no privacy and little space but are much more fun. Some of the explorers end here and start making business having learnt about the social discrepancy on the train (it turns out the poor ones are keen to trade their food for silver spoons from the 1-st class carriages).
Only a few do not stop there and try to find out what’s outside of the train. They have lengthy discussions about the possibility of jumping off or climbing outside to see what’s really going on. But they also realize the risks (one can easily fall off or be left behind). Finally, the bravest ones climb out on top of the train roof and realize that there’s a whole new world around passing by which they cannot really explore because they are on the train and that train ride is really their whole life. So the only way to discover the world passing around is to stop the train, to pause their life, to change the rules of the game, but that also means putting an end to their current experience…
It’s better to leave the end of the story to those who want to read the book, but it’s even better to find out what it really feels like through taking the Trans-Siberian journey.