Traveling Around Russia by Plane, Airline Companies Contacts, Average Price of a Flight to Russia

Author: Dimitry Paranyushkin (on 21 Jun 2013)
Tweet
Gone are the romantic times when you'd board a small shaky plane in a small Russian town, take 100 grams of vodka for the "courage", and pray you'd make it home safely. Nowadays it's more Boeings and Airbuses rather than good old "Tu-134" and "An", and unfortunately you can't take a flight to every small village like you used to.
However, the prices are really good, and often you can get to any destinations for the same price as a 2nd class train ticket. So, for example, if you're doing Trans-Siberian and don't want to take a train there and back, you could take a flight back to Moscow from Irkutsk (Baikal lake) for about €150-€200. 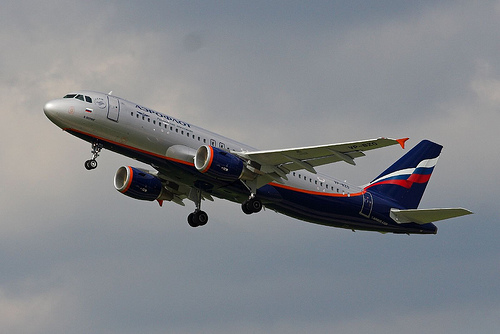 There are several major airlines in Russia, the main one still being Aeroflot. They have diverse route network and more or less similar service (which is not as good as on Aeroflot's international flights, but not too bad, either). There are also some local "no-frill" airlines, such as SkyExpress, which have daily cheap flights between Moscow, St. Petersburg, Sochi, Rostov, Ekaterinburg and other destinations. Here's some more information about each Russian airline.

Transaero
Not very nice service, however sometimes kicks off very low prices for some international flights (to UK and Germany) and domestic flights (to Kamchatka).
Internet: http://www.transaero.ru/ (Russian only)
Contacts: +7 (495) 241-76-76 (Moscow, Russia)

Pulkovo
St. Petersburg – based airline company. Regular flights between Moscow and St. Petersburg. Sometimes good offers for international flights from St. Petersburg.
SkyExpress
The first Russian no-frills budget airline. Has flights between Moscow and St. Petersburg, Rostov-na-Donu, Ekaterinburg, Perm, Murmansk, and Sochi. Their network is constantly expanding, but their service is considered to be the worst – especially the fact that the planes are always late or sometimes get cancelled. However, the fact that you can fly to any of these destinations for about €20 return sometimes attracts some customers.
Internet: http://skyexpress.ru

Moscow - Petropavlovsk (Kamchatka:
Usually about $500 US return flight.
Best deals are offered by Transaero and Aeroflot.