Author: Dimitry Paranyushkin (on 29 Jan 2010)
Tweet
Traveling by bus could be the best way to explore Russia, but it's not and there are a few reasons why. The bus routes span all over the country and the prices are so low it seems like they forgot to raise them from the USSR times. However, most of the buses were made in the 80s, so you can imagine the level of the comfort, plus the queues at the bus stations always put people off. We put together this section anyway, because if you're ready to compromise on the comfort, traveling by bus can save you A LOT of money, so it's good to know about this option, too.

Q: How to Find a Bus Station

If you are looking for a bus station in the cities listed on our site, go to the Transportation section of the appropriate city / destination guide on Way to Russia – we have the addresses and directions there. Otherwise, read on.
"Bus station" in Russian is "Avtos`tantsiya" ("автостанция"). The first place to look for a bus station is next to the main railway station of the city. If you can't find it around there, then ask any person something like: "excuse me, where's bus station?" - "izvi`nite, gde avtos`tantsiya?" - "извините, где автостанция". Most likely, the person will recommend you to take a bus ("avtobus" - "автобус") from the railway station that'll take you directly to the bus station (there's always such bus, connecting the railway station and the bus station).
In big cities, such as Moscow and St. Petersburg, you'll have to take the metro, and the bus station will be just next to the metro exit.
Schyolkovsky Bus Terminal, Main Bus Station in Moscow 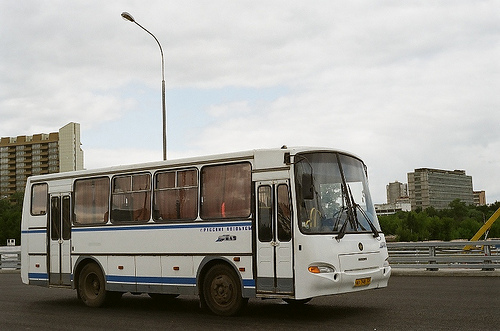 Q: How to Read the Bus Timetable

Once you got to the bus station, you need to find the schedule - "raspi`sanie" - "расписание". Once you found it, you need to make sure it is the schedule of the buses departing from the bus station, not arriving. "Depart" in Russian is "otprav`lyatsya" - "отправляется", sometimes there'll be written "departure" - "otprav`lenie" - "отправление".
Your destination will be marked as "point of destination" - "punkt nazna`cheniya" - "пункт назначения". You need to know the Russian alphabet to be able to read something, see our Russian Language section, it'll be enough.
There'll be usually two times written, one is obviously the time of departure (vremya otprav`lenie - время отправления), another is the time of arrival (vremya pribytiya - время прибытия).

If you feel like talking to the people or information office, use the phrase "when the bus to .... (e.g. Novgorod) departs?" - "kog`da otprav`lyaetsya av`tobus v Novgorod?" - "когда отправляется автобус в Новгород?".
Once you know the times, you need to know the prices. The price - "tse`na" - "цена". It's better to buy the tickets one way (v o`din konets - в один конец), because there're no discounts for return tickets anyway, and there's a risk a salesperson won't understand what you want.

The prices vary, but are surely less than the train prices.
The prices for foreigners are the same as for Russians.

Write down all the information you got to show it to the ticket sales person. When she (usually women work there) tells you something, ask her to write it down, so you'd check if you understand each other.

Try to do everything to find if the ticket you need is available, there's nothing worth standing in a line for 2 hours, to learn that there are no more tickets left.

Q: How to Buy a Bus Ticket

You should buy the ticket at the ticket sales office - "`kassa" - "касса" in Russian. If you're not sure where the kassa is, ask "where's kasssa" - "g`de kassa?".
There'll be most probably many people at the bus station, and especially long queues, so be prepared to spend 1-2 hours waiting in a line and being shoved by babushkas (old women). It's going to be one of the most typical and interesting experience you can get in Russia.
Once you're close to the kassa window, prepare all you've written down, and show your paper to the person selling the tickets. Useful phrases are "one ticket to .... (e.g. Novgorod), please" - "o`din bi`let v `novgorod, po`zhaluista" - "один билет в Новгород, пожалуйста". Be prepared there'll be no tickets left.
Once you've got the ticket, stay next to the window, and check the change and the data on the ticket. Sometimes, there's nothing informative written on the ticket, so it's only left to hope it's ok.