Driving around Russia by car, motorcycle or hitchhiking

Author: Dimitry Paranyushkin (on 25 Sep 2018)
Tweet
Driving in Russia is a no-brainer, but you'll have to be a bit more pushy than normally. The thing is that there's lots of traffic in big cities, so during the peak hours especially the road is war zone. It's quite normal for Russian drivers to drive 120 km / h when the maximum allowed speed limit is 60 km / h and there's no lane discipline whatsoever. All this makes the roads look like a total chaos, but it also provides for some fun experience. 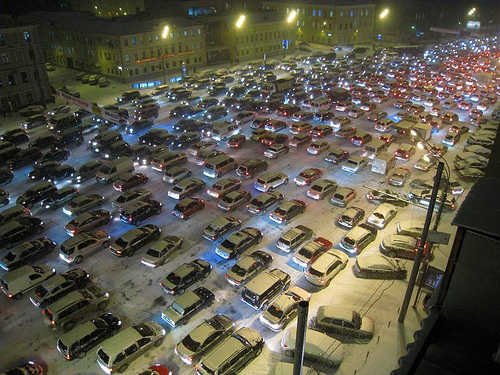 Paperwork for Driving in Russia

First, you need to make sure you've got all the documents sorted out, so you can use your car in Russia. Please, refer to our Travel to Russia by Car section to get more information. Basically you need an international driving license in addition to your standard one and the obligatory third-party insurance.

If the documents are OK, then you are fine: there is a good infrastructure on main motorways, there are no fees to use the roads (not yet), the petrol is relatively inexpensive, there's good infrastructure along the way (food, hotels), although the quality is below average. If you're traveling to Siberia, expect that the distances become longer and there is less signs of civilization along the way. It's better to plan ahead where you're going to fuel your car and where you're going to sleep. Choosing big cities as the stopping points is perhaps the best idea.
The weather in Russia can get quite harsh during winter (November to April), so make sure your car will be able to ride in the snow and while it's minus 15 celcius outside. During the winter months the traffic gets very congested and sometimes there are huge traffic jams on motorways, so take this into account.
Driving is quite safe, but you should be careful not to stop in remote areas not to be robbed and not to have your car stolen. Of course, if you drive on the main routes, such as Moscow - St. Petersburg or international motorways, there's no problem.
There's a saying in Russia that there are two problems in our country: fools and bad roads, so if you're going to bring in your fancy new Ferrari to Russia, its life span will shrink rapidly. The road condition is very poor, and it is even worse in small towns. You should always be careful and look out for holes and cracks, otherwise you will kill your car. There are only a few good roads where you can drive fast without being afraid of damaging your car: that is the MKAD road around Moscow, some motorways connecting airports and big cities, and Rizhskoye Shosse, connecting Moscow and Riga (Latvia).

Renting a car is a good option as you just need your driving license and the price of petrol and of car itself is pretty low. A rent for 1 day usually costs around $20 US for a Russian car, and from $40 US for a foreign car. The requirements are basically the same: a credit card, driver's experience not less than 3 years, minimum age: 21. Some local companies may be more flexible.
There are plenty of gas stations and many autoservices in the European part of Russia. You can buy the food in the cities and villages along the way.
You can check the prices for renting a car in major Russian cities online using Way to Russia online car rental service.

The road rules are basically the same as in Europe, and you won't have problems following the signs as well. The maximum speed limit inside the city is 60 km / hour, while if you drive at about 90 km / hour outside of cities, you won't have problems with traffic police. Your car should have a first-aid kit and a fire extingiusher (this is the traffic police requirement).