Hitchhiking to and around Russia

Author: Dimitry Paranyushkin (on 29 Jan 2010)
Tweet
Although you won't find centralized websites in Russia dedicated to hitchhiking, where you could find a ride online, "autostop" (that's how it's called in Russian) is hugely popular among young people. It's a bit more rough and dangerous than in Europe, but quite easy to do as the roads are relatively busy and the drivers are used to it.

How to Get a Ride & Local Hitchhiker Communities

If you want to start your search, try the famous mitfahrzentrale in Germany which you can still use to find journeys to Russia from Western Europe. For journeys inside the country, you could contact the local hitchhiker community through the "The Academy of Free Travel" or autostop_ru Livejournal community. Also, the most famous Russian hitchhiker Anton Krotov can be reached on +7 495 457-89-49 or +7 903 500-98-50 or krotov.avp@gmail.com
Also, read an interesting report (with photos) about hitchhiking in Russia by Peter Reitsma from Holland. 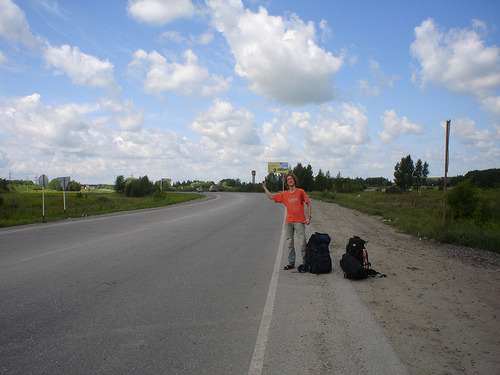 A Dutch guy hitchiking in Siberia / photo by Platschi@FlickR

What Equipment Do You Need?

You will need a backpack, raincoat, good shoes, warm jumper, perhaps a tent, some cash (and not credit cards or cheques), also a gas cooker will help. Don't take too much stuff or you won't get a lift. We'd also recommend having a few gifts from your home country, so you could thank the drivers for the journey. The distances are quite long, so it's likely you'll meet lots of people.

You can wave down any car anywhere in Russia, and a driver (either taxi or a normal private car) will give you a lift, but only for money in a city. The good thing is that just a moment after you wave down a car, somebody will stop ready to give you a lift. The bad thing is that they will definitely want money. Usually it's about 20 R ($0.7) for a kilometer inside a city.
So, it can take quite long to hitchhike from the city. It's much better and more efficient to go slightly outside of the city (by a local train, for example), go on a busy motorway and hitchhike there. The best places to hitchhike are gas stations (where the cars come out), special stops for trucks (where the driver have little picnics), next to traffic police stations or other places where drivers have to slow down.

How Safe It Really Is?

Well, to tell the truth, I don't recall hearing any horrible stories about hitchhikers getting murdered, raped or anything like that. If you practice your common safety, you should be fine. Girls should avoid hitchhiking alone though, it's always nice to have a guy with you even if that decreases your chances of getting a ride. Be prepared to meet some really rough people along the way, so if you're not very open or communicative, you'll have a hard time.

Who'll Give You a Lift

Mostly truck drivers (but not international cargo trucks, because it's forbidden for them to pick up anybody), other people, who want to communicate.

How to Increase Your Chances

The fastest way to hitchhike if you're a boy and a girl, because the drivers will always want to help a girl, and as there'll be a boy, the girl won't have any problems.
It's better to hitchhike when it's still daytime, somewhere around 8am and 8pm.
It's also nice to have a paper with your destination written. You can try to do it both in Russian and in English (to increase your chances that someone stops), but then the person who stops might want to just rob you.

If you'd like to buy a Russian train ticket, you can do it yourself at a train station, through a travel agency, or online.

Have you ever wondered what would happen if you are late for your train, suddenly decide to stop in the middle of a 4-day Trans-Siberian journey, orwhether you can carry this fancy Soviet Uralmotorcycle back home by train.
Transport Guide:
This free independent travel guide to Russia exists thanks to the commission we get when you order these hand-picked trusted third-party services or when you buy our book. Please, support us!