Author: Dmitry Paranyushkin (on 20 Jul 2015)
Tweet
The beginning of 2000s was a fertile time for the new Russian directors to come out. However, it was difficult for them to stay. The rules of the market started to make things more concrete and while the general quality of Russian cinema improved, there was also much less space for experiments.

After a period of confusion the public wanted grand narratives again. Russian cinema was going through something similar to the post-war period, the 50s and 60s. The ideological hold of the government became stronger, fortified by the increasing quality of life. Cinema started to serve, once again, the immediate need to resolve tension and to entertain, giving rise to some good works. 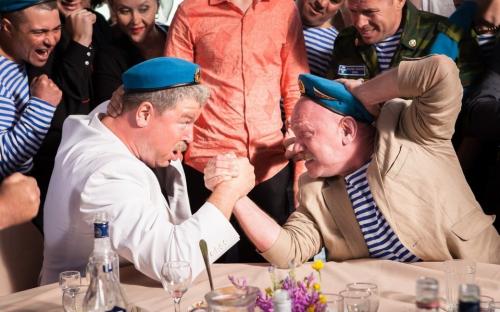 Among them is the comedy "Gorko" made by Zhora Kryzhovnikov (Andrey Pershin's pseudonim) in 2013. Seemingly superficial story about a wedding that went wrong, "Gorko" in fact has many layers. It is a story of conflict between generations and social milieus so typical for Russia. Petty government officials share the same wedding table as war veterans, oligarchs end up fighting with movie stars, former criminals dance with the models. They are all part of the family and the escalating conflict that's heading towards disaster is masterfully resolved towards the end. What needs to happen is the total acceptance of one's surrounding and one's heritage, whatever it may be, even if it's embarrassing. In that way Gorko acts as a sedative, in the best traditions of Soviet post-War cinema. It's pleasant to watch, funny, and gives you a good idea of Russian provincial life circa 2013.


However, as with any sedative, its effect is temporary. Accepting one's own ghetto may be the first step towards salvation, however the real work starts when one tries to change oneself. "Gorko" does not seem to be aware of it. In fact, the brisk kisses that the bride uses to get what she wants from her fiance continue until the very end of the film. Final titles come through the laughter, covering up glamorous fakeness, pushing away unfulfilled desire to be someone else exuding from every character in the film. The fact that "Gorko" was actually premiered in New York is very symptomatic of the same identity crisis that it fails to deal with in its own narrative.

Another notable work is "Geographer Drank his Globe Away" by Alexander Veledinsky (2013). "Geographer" is made after the book of a very interesting contemporary Russian writer Aleksei Ivanov. The film is reminiscent of the good old Soviet movies from the 60s and 70s, with a solid story reaffirming the very basic human values of kindness, good will, responsibility, and trust. The intention to educate in this film is probably pushed a little bit too far, though. The original book by Ivanov is really focused on the relationship between adults and children, as well as their relation to the their homeland and roots. The film departs  from that original  intention, but in that departure it finds something else: a very truthful representation of everyday life in a small-town Russia, which may be interesting from ethnographic point of view.

"Stalingrad" by Fyodor Bondarchuk (2013) is an epic film about the Second World War. What's interesting in that movie is that it transposes the Russian narrative of the war onto the Western technology and distribution machinery. Without a doubt, it's a beautifully made film although it will not really surprise you and probably will never be referred to as the classics of Russian cinema. However, it's the best attempt so far to tell the story of that war using the Hollywood means and it's succeeded at that.

During the past years several other productions emerged, which are not really worth mentioning as they were mere copycats of their Hollywood counterparts. Russian directors have finally learned how to make good entertainment, but completely forgot how to make timeless cinema. However, just like any period of stagnation is followed by a dramatic change, this also means that the Russian cinema is in fact going through its most interesting moment right now. The masters have been remembered, experiments have been made,  stories that had to be told have been told, the current reality is being dealt with, the industry is recovered, the skills have been learned, people have been entertained... what lacks is the new voice, a new breakthrough, the next evolutionary step that would take Russian cinema into the new realm.