Author: waytorussia (on 01 Feb 2015)
Tweet
In 13th century Kievan Rus’ was attacked by Mongol Empire. The separate armies of principalities were defeated one by one.

As a result most of the Russian principalities were vassalized by Mongol Empire. This was a seminal moment in Russian history, which defined its future development for centuries.

Republic of Novgorod was the only region which remained independent and was not devastated by the Mongol forces.

This is why Novgorod is often considered to be one of the "purest" Russian towns, which still retained a lot of the ancient Rus' charm.

Mongol occupation which lasted about 200 years is considered to be crucial for the development of Russia.

This invasion lead to further disintegration of Kievan Rus’ – princes had no use cooperating with each other, because all their interactions were mediated by Mongols.

This lead to the formation of more independent regions within Kievan Rus', where those who were willing to cooperate with Mongol occupants were given more powers to reign over their principalities. 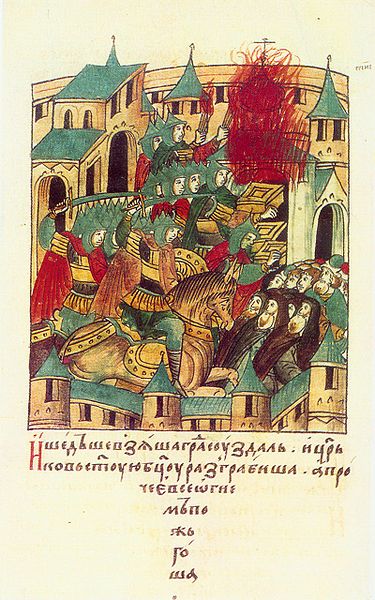 Also, the two centuries of the occupation by Asian invaders influenced the Russian culture a lot and made Russia more different from the rest of Europe.

The autocracy of Mongols was easily implemented into our culture and we also gained the inclination towards collective actions and decision-making, rather than individualism, which was more prominent before.

Under Mongols small regional center Moscow developed rapidly. Moscow was just one of many small towns at north east borders of Kievan Rus’.

However several trade routes passed through the town. The other advantage of Moscow was a remote and forested location, which prevented frequent Mongol attacks.

Finally, the transfer of power was also quite smooth among Moscow princes, and because of that the rapid development of the region was not slowed down by constant wars.

Prince Daniil inherited a tiny principality of Moscow in 1303. He widely used the advantages of Moscow and started the development of Moscow as a regional center.

Daniil and his descendants managed to establish a good relations with Mongols and used the decline of old principalities to increase the wealth and power of Moscow.

Finally, towards the end of the 15th century Muscovy gained control over the most of Russian lands. Muscovy became powerful enough to claim independence.

The key battle versus Mongols took part in 1480 at Kulikovo field near Dnepr river. Russians defeated Mongols and Muscovy became an independent state.

Muscovy consolidated all ethnically Russian lands in the 16th century and started expanding even further.

The time from the 16th to 18th century was the period of expansion.
Russian History Guide:
This free independent travel guide to Russia exists thanks to the commission we get when you order these hand-picked trusted third-party services or when you buy our book. Please, support us!