Petr Pavlensky got known for burning the main entrance of the Federal Security Bureau (FSB, former KGB). While there's been a lot of debate whether it can be considered to be art or not, Petr himself calls it a "gesture". This gesture may be controversial, but the one thing that it reveals is the transgression of fear towards a repressive structure within one particular individual. 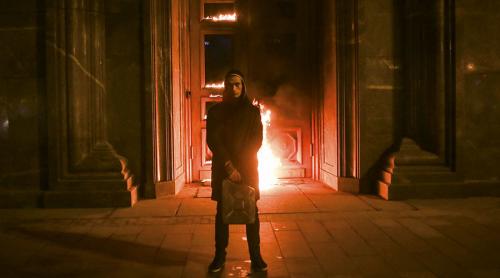 Russians know what he's talking about. During the Soviet times when ideology started to fail stories gave way to fear. It happens in any authoritative system undergoing through crisis. Fear as an instrument to hold a nation together and to prevent transformation and change. Capitalism uses the same technique, but the thing that one is afraid of is on the outside (the terrorists). In communism, and then - later - in the "sovereign" breed of democracy in Russia, the thing to be afraid of is on the inside. In that way, Pavlensky's strategy was to identify the origin of his fear, and the fear of many other people (in that particular case it's the security services, but it could as well be anything else), and to make a sort of ritualistic burning sacrifice of that fear (and, probably, oneself) towards a repressive system. One may argue that his action is a provocation, but then it is very rare to see a man who seems to be so free behind the bars:


Petr Pavlensky's previous actions included cutting his ears on top of a psychiatric hospital in Moscow and nailing his testicules down to the Red Square boulders. Always choosing some kind of repressive site as a starting point, Pavlensky then creates a gesture-metaphor, which is intended to go even further than the structure itself ever would. Through that circumvention of terror, Pavlensky shows a strategy to stay invincible in an oppressive regime. However, it is only possible if one takes the same position as Pavlensky: a person who has nothing to lose, but only his life, which is is ready to give for the cause (of living). 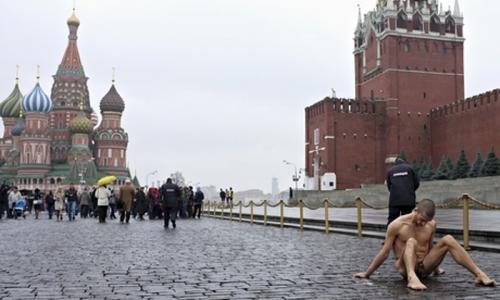 In that way, his request at the court to consider his burning of the security bureau door as "terrorism" is both a sign of solidarity with the other prisoners who performed similar acts, and also – continuation of his circumvention strategy, which is targeted at challenging the limits of oppressive mechanisms that come into play through his actions. 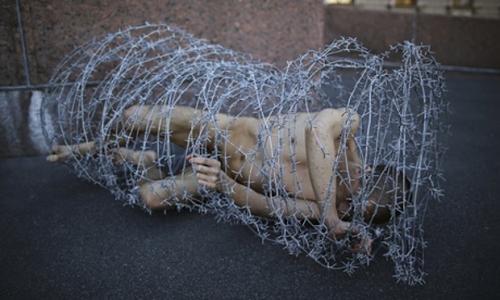 In 2017 Petr Pavlensky had to leave Russia due to the fears of persecution. Having settled in France (where he applied for a political asylum) he continued his provocative style of art-making, this time, however, using some very dubious methods. Among his recent "achievements" is a scandal where a Paris mayor canditate had to retreat from the election race because Pavlensky and his girlfriend threatened to release a sex tape featuring the candidate masturbating (at least they did not ask for Bitcoins). Another earlier incident is Pavlensky stabbing a few people at an apartment in the Paris' prestigious 6th precint because of an argument. The artist himself sees this activity as the natural lineage of his practice claiming to use his art to reveal the hypocricy of political systems. The methods he uses, however, are becoming reminiscient of the yellow press and right wing parties: scandal, blackmail, and violence... Strangely enough, this "evolution" has happened during Pyotr's time in Europe, so, maybe, Russia was not such a bad place, after all, at least in terms of its inspirational capacity.

Mikhail Levadny is from the country of Ukraine, but as most of his prophecies are in Russian we consider him to be one of the most important local prophets around.
Contemporary Artists Guide:
This free independent travel guide to Russia exists thanks to the commission we get when you order these hand-picked trusted third-party services or when you buy our book. Please, support us!