Author: waytorussia (on 31 Jan 2015)
Tweet
With the communism's collapse, the binary opposition between communism and capitalism ceased to exist, with Russia finding itself on the verge of a havoc.

The challenges it had to deal with were very different from that of the rest of the world.

While the West was trying to shape the new post-capitalist ideology (trying to find a new rival in the absence of the old one), Russia was like a student who was late for the class, learning all the lessons the hard way. 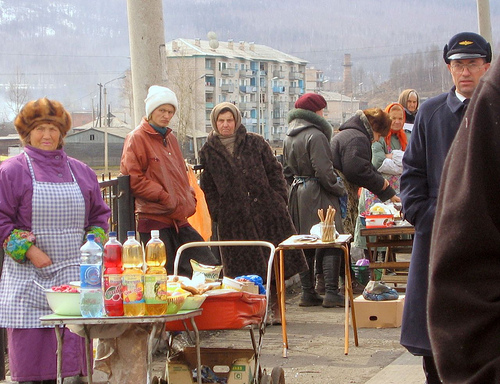 The End of the 80s, Putsch, and The Eltsin's Years

The end of the 80s was not the best time in Russia, but it was definitely very interesting.

The old system was collapsing and most of the people were losing the last remnants of faith in the communist ideology.

As the religion was taken away by the communists years before, many started turning into the most weird directions. Some found refuge in starting semi-legal businesses, some turned to sects, some went to psychics.

The whole country seemed to be on the verge of mental collapse.

I remember going to a grocery shop and seeing people rushing towards the bread stalls, grabbing their piece and biting it, so that no one else steals it away from them.

The famous deficit and queues became a normal thing for a few years and many people lost any orientation as to what's going to happen in their lives. 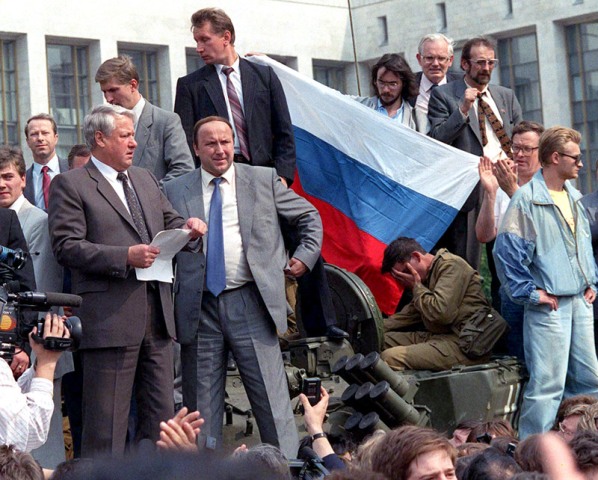 The 1991 putsch has changed everything. Suddenly the old system was dismantled and after a series of political decisions the USSR collapsed.

The new Russia was born from the ashes, but it had a long way to go. The inflation was insane, people did not have enough money, no one knew what was going to happen.

Slowly some economic reforms clarified the direction: in order to survive you had to become a hard-core capitalist and adjust to the new way of thinking directly.

Those who managed, survived, those who didn't – became alcoholics, lost their families, friends and were pushed at the brink of society.

You could meet a lot of former academics back then looking through trash cans on the streets.

It was simply impossible to believe that those who were the driving force only 10 years ago were now not needed in this new society.

Boris Eltsin was a very important figure back then.

He emerged from the communist party, but was brave enough to stand on a tank during the Putsch and protect basic democratic freedoms of which nobody really knew back then anyway.

His charisma and commitment made people click, and soon he became the first president of Russia.

The years of wild capitalism followed, when you could grab as much as you could and a lot of people did. It was a crazy time with no rules, no definitions, no morals.

A crash course into capitalism. By the time it was 1996 things got more or less settled and there was some hope for the new future (for those, who survived). 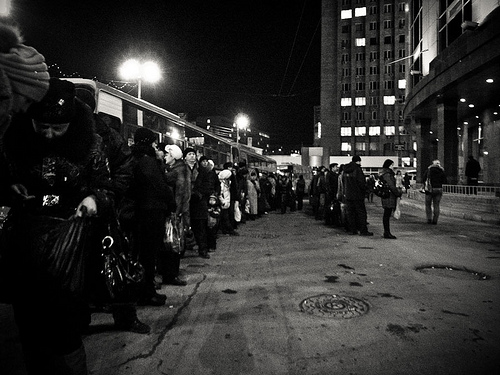 The system overheated and another crisis followed in 1998.

Many people lost their jobs, the inflation was several hundred precent, and we had to go through another stage of re-invention.

In retrospective it was quite beneficial for the country, a sort of set back that allowed us to look at things in a more objective way.

A lot of new businesses were started back then, which are the backbone of today's small innovative part of the Russian economy.

However, the economy was still too reliant on natural resources, the social system was non-existent, the international image of Russia suffered tremendously.

On the 31st of December 1999 Boris Eltsin made his famous address to the nation, naming Vladimir Putin as his successor.

The Putin Years and Sovereign Democracy

In 2000 Vladimir Putin became the 2nd elected president in the Russian history.

His approval ratings were impressive and he quickly gained even more popularity by resolving the ongoing Chechen conflict and making several strong decisions about the economy and public spheres.

Some say that his actions were more populist than anything else and his successes were more connected to the rising oil and gas prices than sound economic policies.

This might be true, but one thing that Russian people have very strongly associated with Putin is that during his time at the office the respect for the government grew immensely and material well-being for many ordinary Russians improved.

At the same time, Putin and his government had often been often criticized for establishing authoritarian regime in the country once again.

His aide Surkov even came up with a name for it: Sovereign Democracy, kind of like we're doing democracy, but in our own, Russian, way.

If you ask Russian people, they are not so naive either. After all, in the last 100 years we had found and lost at least three distinct ideologies, so people just learned not to believe anything, including the media.

On a general level, there's a sort of common-sense agreement that people allow the government to do what it wants as long as it allows them to earn money and have a normal life.

At the bottom line, everyone feels that a bit of the iron fist can be beneficial after the 90s madness, however, this is also changing.

And maybe that's why the new president is Dmitry Medvedev and not Vladimir Putin.

They are closely linked, of course, but at least it's a sign that both the people and the bureaucracy are at least listening to each other.

If you look at the challenges that Russia had to deal with during the last years, they are very different from that of the USA or Europe.

After the communism collapse and a short triumph, the Western world has also discovered itself at an yet unknown territory.

Unable to define itself through the old rival any longer, capitalism shifted into a sort of agonizing state, trying to find the new enemy, which could prolong its existence.

Saddam Hussein, terrorism, global warming, the war on drugs, and - more recently - the global financial system have all had a chance to be used as disposable filters to help identify and shape the future prevailing ideology.

This ideology has been imposed on other, weaker states through the media and on political levels.

Russia did not avoid the fate of the others and had to be in the position of a scolded child for years.

It developed many complexes because of that, and perhaps that's the reason why Putin is sometimes harsh on the international arena.

Many Russian people actually like him acting this way and think it's totally justified.

Once superpower, Russia now has to fit in an already existing ideology once again, but this time the one that can't even define itself without having an enemy.

And many people don't feel like being part of the global war on anything – be it the climate change or piracy – they just want to enjoy the short few years they had of relative well-being, calmness, and at least an illusion that when they're old they won't be thrown out on the streets like their parents.