Author: Dimitry Paranyushkin (on 01 Feb 2015)
Tweet
In Russian, you can change the sequence of words around within a sentence. Depending on the sequence you choose the meaning changes. That’s why Russian sentences are often long and complex: you can express an emotion not only through the intonation, but also through the relations of words to one another. To say “This text does not have any meaning” in 6 different ways just by changing the position of words means there is hypersensitivity on the unconscious level regarding the effects that structure can have on the context and meaning even if it comes into conflict with the original meaning itself.

In Russian there are no auxiliary verbs – that is, people do not use words like "does" or "is" to construct sentences; also in Russian there are no articles – "the", "a", "an". Hence, in Russian the phrase "Where is the man who doesn't like you?" will be "Where is man who not likes you?" ("Где мужчина, которому ты не нравишься?").  Instead, Russians change the sequence of the words, play with the intonation, change the endings and suffixes, and use the auxiliary words, such as "and" and "so", to express the meaning better.
This free independent travel guide to Russia exists thanks to the commission we get when you order these hand-picked trusted third-party services or when you buy our book. Please, support us!
russian visa
train tickets
guide book
hotels
car rentals
travel insurance

Sometimes this peculiarity of the language makes people think that Russians are rude. If you take your Russian friend to a cafe and he doesn't speak English very well, it's very likely that he'll say something like "Give me coffee" to the waiter. The reason is that in Russian you can say the exact same phrase in a very polite way using your intonation, changing the sequence of the words, and using subtle changes in the endings of the words or using the auxiliary words (such as "and" or "so"). For example, "дайте кофе?" (literally - "give me coffee?") can be said with an intonation that means "can I have a coffee, please"; but if you change the sequence of the words and said "кофе дайте" (literally - "coffee give me") that would sound much less polite, more like an order. If you say "а кофе можно?" (literally - "and coffee possible?")  actually means "could I please have some coffee, please?". 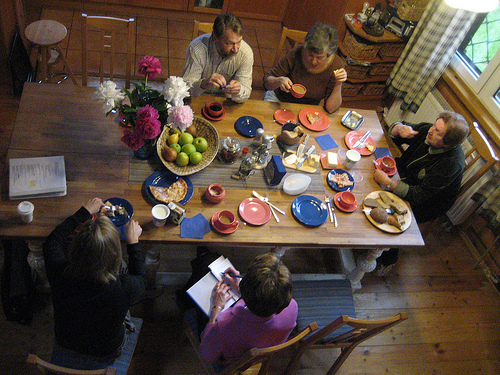 You can only learn these subtleties through practice, but the main thing you should observe is the raise and fall of intonation in sentences. Another important thing to learn is how various endings, suffixes, and auxiliary words (like "and" or "so") used in different context affect the meaning. Finally, the word sequence depending on the context and the meaning you want to communicate. This is the key to mastering the Russian language.
For instance, in the examples above the intonation rises somewhere 70% through the phrase, making it sound like a polite question. Also, by using "and" ("а") before saying "coffee possible" ("кофе можно?"), you make it sound much more polite. If you omitted "and", it would be very hard to make it sound like a polite question just with your intonation.

Or, say, you want to buy a ticket to Moscow for train #3. In this case you just say: "one + ticket + to + Moscow + for + train + number + 3 = o`din + bilet + v + Moskva + na + poezd + nomer + tri".
So, make up simpliest phrases in your own language (without auxiliary verbs and articles), use the dictionary from the next sections and then say everything in Russian.

If you want to be more advanced, you'd have to learn about all the tenses and grammatical rules, but the best way to get it is through practice. We'd suggest to start speaking first and then the natural way of forming sentences will come later.

The main thing about swearing in Russian is the attitude.

Part 3: How to count in Russian - Russian language tutorial and phrasebook

To count in Russian is to get one step closer to the very advanced mathematical intelligence that Russians have.

There are a few words in Russian that do not exist in any other language.
Russian Language Guide:
This free independent travel guide to Russia exists thanks to the commission we get when you order these hand-picked trusted third-party services or when you buy our book. Please, support us!