Author: Maria Mushtrieva (on 01 Feb 2015)
Tweet
Garnishes are served with the main courses either to give an added or contrasting flavour to them. Sometimes they are contributing mainly to the visual impact of the plate.
A well-picked garnish could transform the perception of the whole dinner. Here are some simple but delicious garnishes Russian cuisine came up with. Quite often garnishes are served with different sauces, like mustard and khren.

Fried potato
potatoes fried in saucepan, sometimes with onion, salt and pepper can be added. Unfortunately, most restaurants serve now french fries instead

Baked potato
there's a nice fast-food chain in Moscow, called "Kroshka-Kartoshka", they cook nice baked potatoes.
Buckwheat (grechka) - our favourite garnish, unfortunately it doesn't grow in Europe, because of its strange taste, but it's really nice.

Ragout with eggplants
Eggplants came to Russian cuisine from the North Caucasus regions and took their special place among the traditional Russian garnishes.

Khrenovina (a.k.a. Adjika)
most popular spicy tomato sauce for the meat dishes

Mayonnaise
is used as a base for many Russian salads

In the Russian kasha was always made in earthenware crockery. Fill 3/4 of a pot with buckwheat groats, add salt, butter. Pour over boiling water up to the top.

Stir in carefully. And put into the well-heated oven for 3-4 hours. One hour before finishing, cover the pot with a large pan and turn upside down.

A half an hour before serving, put wet fabric round in order that kasha falls off from the pot sides. Serve with cold baked milk or butter. 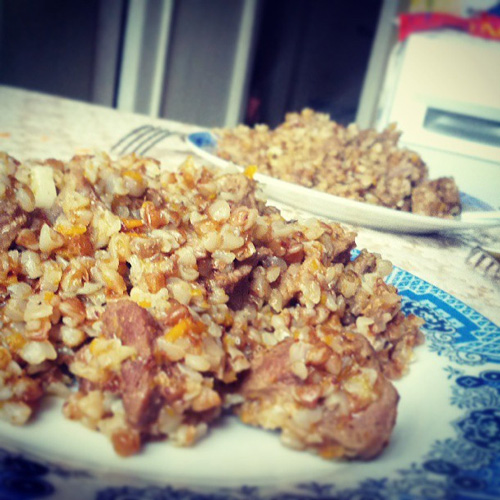 Wash eggplant, remove the tip and stalk, cut the eggplant into large pieces.
To do that cut them into halves, then each half into three segments lengthwise and crosswise into slices.

Arrange the eggplant slices in a small deep pan. Place it in a preheated 200 degree oven and bake for 20 minutes. Now prepare separetely the rest of the vegetables. Cut onion and pepper into large cubes, then cut the garlic cloves into halves.

Remove the eggplant from the oven. Add vegetables and mix gently. Return the pan with the vegetables in the oven and cook for another 20-25 minutes.

Once the stew is finished, stir again and serve. It can be used as a garnish but you can as well serve it as an independent vegetarian dish.

In a deep frying pan heat the oil and add onions and fry until golden. Then add the mushrooms and fry all together for about 10 minutes.

Now prepare the cereals. Put it into a fine sieve and rinse thoroughly several times.

Add clean barley to the mushrooms, stir and cover with water or broth, season with salt and pepper. Bring the mixture to boiling on a high heat, then reduce the heat and simmer, covered until the cereals becomes soft, if necessary watering. Cooking time is 45-60 minutes.

If you want to reduce the cooking time, soak the cereals over the night. At the very end, you can add your favorite greens. Kasha turns out very tasty, tender and crumbly.

The same principle can be used to cook rice and buckwheat as well. 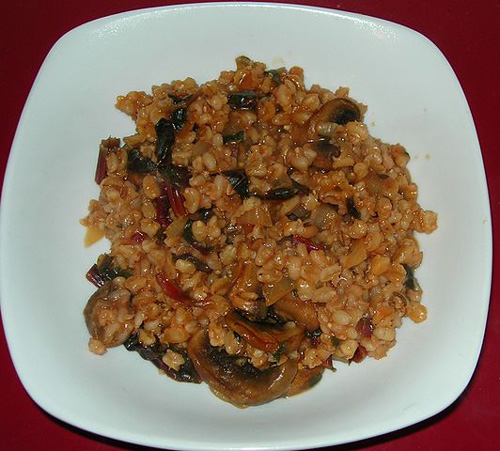 Bring milk to boil, stir in semolina gradually. Add butter, sugar and salt. Bring to boil and cook on low heat for 10-15 minutes. Serve with jam, honey or fruits.

Wash rice under running water. Fry it in butter until light brown. Pour over water and bring to boil, salt and cook on low heat for 40 minutes. Before serving, sprinkle with grated cheese.

Grind everything in the food grinder. As the horseradish is hard to grind, alternate it with other vegetables.

Be careful with hot pepper, first add the half of it, mix, try and add more little by little regulating the desired spiciness. Then add some salt.  and If tomatoes are not sweet enough, add a bit of sugar.

Arrange into sterilized jars and close the cover, store in a cool place. 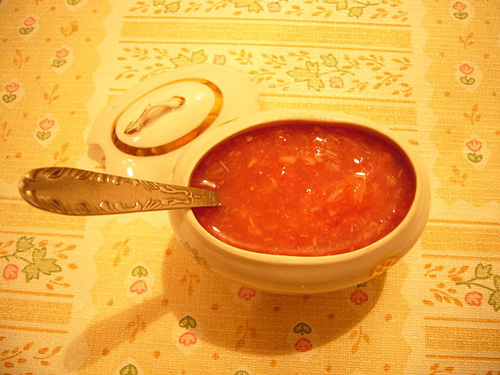 Recent scientific research shows that there are more neurons in our guts than in our brain.

Syrniki - Сырники - is another amazing dish from Russia.

Borsch – Борщ - is one of the most famous Russian soups.
Russian Food Guide:
This free independent travel guide to Russia exists thanks to the commission we get when you order these hand-picked trusted third-party services or when you buy our book. Please, support us!