Interesting Facts about Russian Women and Women Rights in Russia

Russia has the legacy of the Soviet Union, which – at least on paper – respected the equal rights between men and women. During the Soviet times women would work at the factories and there was generally a cult of a strong woman. There was no present feminist discourse and on the surface it seemed like everything was relatively fair.

However, Russia is still quite a conservative and patriarchal society: men and women might have equal legal and economic rights, but there are clearly defined social roles, which may sometimes be constrictive. So, for instance, groups like Pussy Riot were doing something quite extraordinary in the sense that they were claiming the "girl power" in a society that only allowed it to happen in specially designated areas... 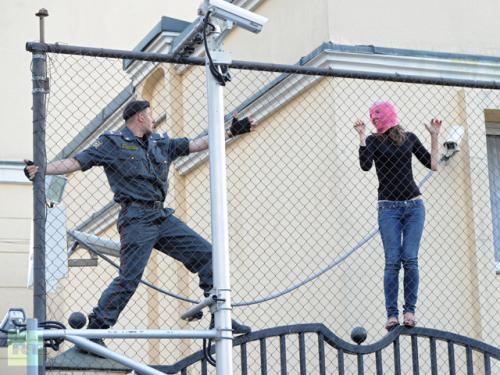 One of their performances was very revealing in this regard, kind of summing it all up in a very concise visual way:

Women make 46.9% of the employed population in Russia. The greatest proportion of working women are in public health service (85%), education (81%), credit and finance (78%), information and accounting services (75%), whilst the lowest share is in the construction industry (22%). As in Soviet times, the majority of working women are trapped in low-wage areas, such as medicine, education, and clerical jobs. The difference is that Soviet-era perks, such as accessible day care and child allowances, still exist but are only nominal – that is, not substantial at all.

The principle of equal pay for equal work is in the constitution but men prevail in leading positions and dominate among well paid experts, so men's average wage is higher than women's and it seems to increase even more with time.

There are protective laws prohibiting too hard jobs for women, such as carrying too heavy weights, or working at night. You'll see many women, though, working in the shops and in the metro past midnight: the law allows 'temporary' contracts for such jobs. Pregnant women or women with a child 1 to 3 years of age are strictly forbidden to work at night. When a pregnant woman leaves her job to give birth and look after her child, there is a 'requirement for a 3 year-paid maternity leave for child care'. Therefore young women are often discriminated when applying for a job for that reason.

Women make 45% of the unemployed population. Many women lost their jobs after the end of Soviet Union. Also, like many men, some educated women left their jobs themselves (because of lack of proper payment) for other jobs where they don't put in practice their skills. Some women stopped working and stayed at home, some women became alcoholics.

The age for pension is 55 years old for women, and 60 for men. However State pensions are usually 10000 R / month ($200) which is barely enough to eat for one month. Consequently many old women find little jobs to earn a bit more.

The legal marrying age is 18 years old for both men and women, but it is possible under some special circumstances for a girl to marry at 16 of age.
Property acquired by spouses during marriage is their joint property, unless stipulated differently in a contract between spouses.

The spouses can share their surnames after the wedding. The husband can take the surname of his wife or vice-versa.The surname of a man is feminised with the suffix -a to become a woman's surname: for example if the husband is called Smirnof, the wife can change her surname to Smirnova. The spouses can also keep their original names. After divorce names can be kept or recovered.
In Russia, children are usually given a name, and a patronymic (derived from the name of their father). For example Anna has a father called Petr Pushkin, she will be called Anna Petrovna Pushkina. Her brother will be called Stepan Petrovitch Pushkin. People use more often their patronymics than their surname to present themselves in official meetings.

Back in the 1990s abortion was the main method of birth control in Russia, however, during the last years the situation has changed and the most often used method is condoms and contraceptive pills. The Soviet government was the first government in Europe to legalize abortion in 1920. It was then banned between 1936 and 1953 (during Stalin's reign) and then made legal again. Currently abortion in Russia can be performed at a woman's request within the 12th week of pregnancy; within 22 weeks if there are social conditions under which pregnancy, child birth and child rearing would become a heavy burden for a woman; and at any time if it is established that pregnancy could harm the health of the mother or the child.

Contraceptives are freely available from the pharmacies in Russia, mostly without any prescriptions.

The old ladies are very noticeable in Russia, they're called 'Babushka'– Russian for "granny" – and they are in charge much more than it may seem.

In the 90s Russia became popular not only as a new "unexplored" travel destination, but also as a place to find a "perfect" wife (and more rarely – a husband).
Russian Women Guide:
This free independent travel guide to Russia exists thanks to the commission we get when you order these hand-picked trusted third-party services or when you buy our book. Please, support us!