Kuznetski Most area in Moscow

Kuznetski Most is a small area between Tverskaya street, Kremlin, and Kitai Gorod (Lubyanka) and it's a downtown of Moscow. First of all, 'Kuznya' is a great place to walk: it is a real Moscow area, not a postcard at all, hectic busy streets neighbour tranquil lanes and courtyards with traditional architecture. There are also many very nice cafes, restaurants, clubs, and shops. If you want a cool place to meet people, go for a walk and to get the real feeling of the city, check out this area. 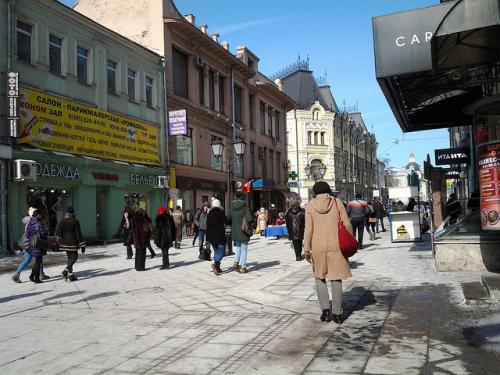 Long time ago there were only half-broken low wooden houses in Kuznetski Most area, and it was the place where poor blacksmithes lived. Blacksmith is 'Kuznets' in Russia, hence the name. In the beginning of the street (on top) there was a bridge over a small river, later this river was put underground, so there's no bridge anymore.
About 200 years ago there was a rich Moscovitan noble buying this area. He immediately put away all the blacksmiths' houses and started to build a fancy new district. Just in few years he built up beautiful houses, with impressive ornaments, rich decoration, pools in the courtyards. Also, he opened some French boutiques in the area. That's when Kuznetski Most started to become fashionable. In a short time all the elite moved to this area, and those who wasn't so fast were coming here to make some shopping and to sit in many of the restaurants and cafes around. In the 20th century, when the communist times arrived, most of the buildings were given to government offices, some were given to soviet shops. The area became boring, the architecture was slowly deteriorating, but nobody seemed to care. In the beginning of the 90s the area was revived again: the buildings were restored, there was many new cafes being opened, boutiques, and shops. One important landmark of Kuznetsky Most is that it's home to FSB (Federal Security Bureau - former KGB) offices, and if you walk along Kuznetsky Most street you can get to the FSB reception, which is open 24 hours (in case you have something to report).

The best way to explore Moscow is to go for a walk in one of the central neighborhoods or parks.

Tverskaya is the main street of Moscow, it starts from the Kremlin and goes north through all Moscow to change into Leningradskoe shosse, which leads to Tver and after 700 km to St.

Apart from Gorky Park, which is not too close to all the good places in the center, Hermitage Garden is perhaps the biggest green area in the very center of the city, although it’s actually quite small.
City Walks & Areas Guide:
This free independent travel guide to Russia exists thanks to the commission we get when you order these hand-picked trusted third-party services or when you buy our book. Please, support us!