Author: Dimitry Paranyushkin (on 26 Feb 2015)
Tweet
Russian trains deserve to have the whole guide written about them and it's not only about getting the best seats and prices. You're going to fall in love with all the nice little pink hand-knitted curtains, old-school yellow tea boilers in every carriage, grumpy but caring conductors. And if you're lucky enough to spend several days on the train, you'll meet so many people, eat so many eggs, and drink so much vodka, that it's going to be one of the major highlights of your Russian journey. 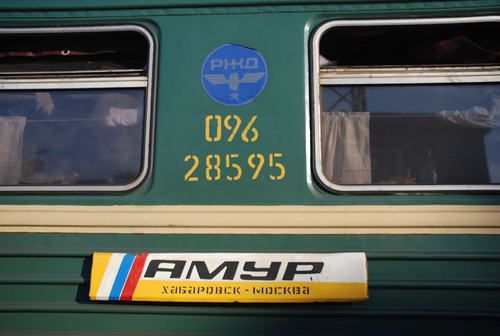 There are "standard" and "privately serviced" (or "firmenny") trains in Russia. The only difference is that "firmenny" trains tend to be cleaner, more expensive, and you get a horrible breakfast in the morning.

Then there are also different classes of the trains. As you perhaps know, Russians with money love luxury, so, please, leave the 1st class to them. You won't find more overpriced, kitschy, and useless train compartments anywhere else in the world. Unless you really need better beds, want to check out the experience, or really need a private shower for the extra $100 / day, then you'll want to know that 1st class is called "lux" or "spalny vagon" ("sleeper carriage") in Russian and that there are usually two beds in there, but sometimes you also get a TV and DVD player as well.
The 2nd class (called "kupe" in Russian) varies in quality, but it may be a good option when you want complete privacy. In this case you can buy out the whole compartment (4 bunk beds) and it'll still be cheaper than 1st class. There's also a lock on these compartments, but they can only be locked from inside.
The 3rd class (called "platzcart" in Russian) is a common carriage, meaning that you share the whole carriage with other people, but, of course, you've got your own bunk bed. It is actually the safest option if you're traveling along, especially for women, because there are always people around, so you won't risk getting stuck with unwanted neighbors in your "kupe" 2nd class compartment. "Platzcart" is a bit more dirty and stinky than "kupe", but you'll get used to it and it's much better to meet people this way. 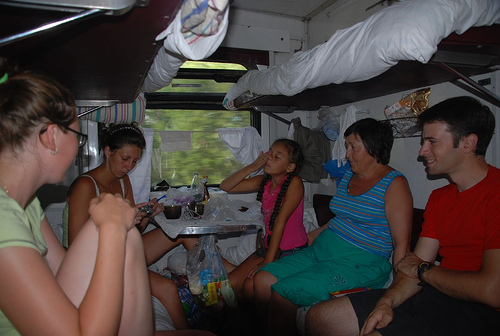 Once you get on a Russian train, you'll realize they're some of the safest, cutest (you'll see why), and comfortable in the world. First of all, each train has a dedicated conductor, who checks the passport of each passenger on the train. There's police on every train also. Then most of the trains are as clean as the ones you'd find in Europe. They even have lovingly arranged little curtains on the windows – how cute is that? They are not as modern, so sometimes kitschy plastic interiors may be a bit suffocating, but hey, you came to Russia for the experience, right? The toilets may be quite dirty, but if you take "firmenny" (more expensive privately serviced trains) this won't happen in most cases. Also, every train has a boiler and you can make yourself nice tea. 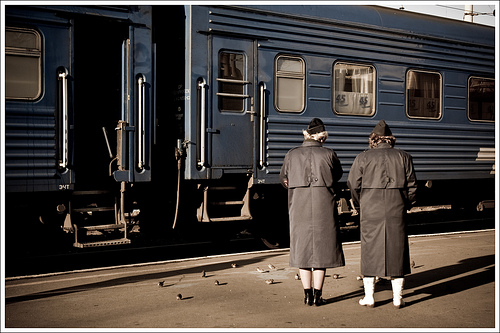 If you're taking an overnight or long-distance train, it makes sense to take the top shelf, so you don't have to share your bed as a seat for the other passengers. There's a storage area under the seats and above the top bunks as well. Both are relatively safe, but cannot be locked, so keep an eye on your valuables. It's not often that things get stolen, but they do.

There are restaurant carriages on long-distance trains, and we can recommend eating there at least once just for the experience. However, the best thing is that every stop (usually 10-20 minutes) there are old women selling home-made food outside of the train. You can buy great soups, home-made potatoes, meat, fish, sweets – everything you like. That's what most of the people do anyway. Also, a very typical Russian train snack is tea is the special metal glasses, eggs, salted cucumbers, rye bread, and vodka – make sure you pack some for your journey! 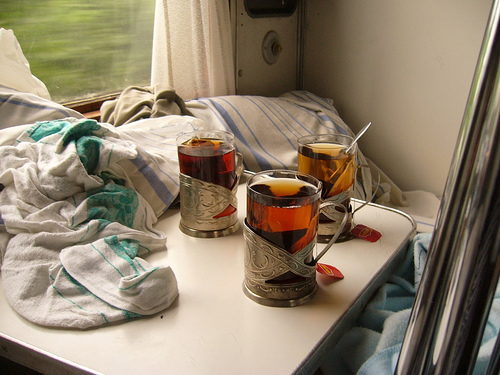 If you are a train geek, we've got a neat Russian Trains FAQ waiting for you with much more facts and survival tactics! And if you're really crazy or bored, we recommend you to read our Russian Railways Regulations guide, so you can spend time arguing with conductors and sales clerks when you've got time to kill.

Buying a Train Ticket in Russia

This is a science of its own. First of all, you can't book or reserve train tickets in Russia, you can only buy them. So when you "book" it online for example, you're actually buying them.
Second, you can only buy a train ticket not earlier than 45 days before your departure.
Third, even though the "electronic tickets" are available since 2009, you can't just print them out and take a train. You would need to go to a special ticket sales office before you board the train with your print-out and get the real ticket before you board the train – so this is not so efficient (but hey, it's a progress :) Some trains by the way have check-in onboard, but you have to check this beforehand and make sure they do have one, otherwise you won't be allowed on the train.
Finally, Russian Railways never pay commissions on their tickets to the agents, so if you buy a ticket, you'll have to pay a markup (from €3-€10 in the Russian Railway's own sales points to 25-50% online).
This free independent travel guide to Russia exists thanks to the commission we get when you order these hand-picked trusted third-party services or when you buy our book. Please, support us!
russian visa
train tickets
guide book
hotels
car rentals
travel insurance 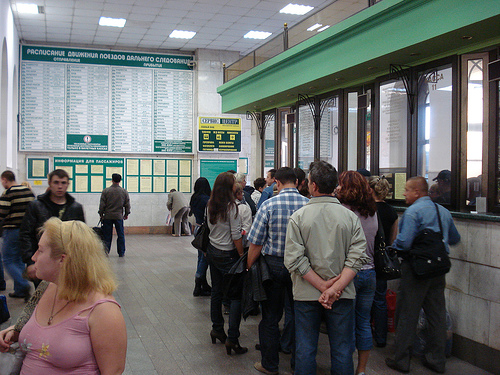 Queue to buy a train ticket / photo by aaronray@FlickR

So, if you decided to buy a Russian train ticket, you've got several options basically. You can do it online through one of the many agencies out there (and pay a higher markup) or go directly to the station and do it yourself. In the latter case you'll probably pay less markup, but no one will speak English and you'll have to queue for quite a long time. If you buy your ticket online or through an agent, you should make sure they know which trains are good and which ones are bad, especially for the Trans-Siberian ones. You don't want to spend 4 days in a train, which is notorious for being badly serviced or carrying murder convicts to a prison in Siberia in a heavily guarded carriage next to yours (although you might actually be into the whole thing for the experience, who knows :)

Also, remember, that to buy a train ticket and to board a Russian train you need to always present your passport.

You can't do stopovers in Russia – you have to buy a separate ticket for each leg of the journey. Officially, there's a rule, which allows you to hop off the train once along your route, but you'd need to stamp your ticket at the train station you hopped off and make sure you reserve directly for the next train. If you're geeky enough to want to do that, we've got a whole section for you on the Russian Railways Rules & Regulations with references to specific laws, so you can argue your way out of the train!

Getting to Russia by Train

Usually it takes around 35 hours of travel time to get from Western Europe to Moscow or St.Petersburg by train. If you take a train from Eastern Europe (Poland, for example) it'll take you around 24 hours, if you take a train from Baltic states, it'll take you around 15 hours. Add some time for changing the trains.
The average return ticket from western European countries to Moscow if you use trains, will cost you from €250. The closer you are to Russia the cheaper it is, especially from the Baltic States.

There are no rail passes for Russia, but if you have an international rail pass the price might be much cheaper, depending on the option you choose. Perhaps the most interesting one is Eurail (www.eurail.com), which gives you unlimited 2nd class travel in many Western European and Scandinavian countries.

You can also take a Trans-Siberian train to Russia from Beijing, China or Ulan-Bataar, Mongolia. These take about 6 days and cost from €300-€400 one way (Beijing to Moscow).

You can find out more about different train routes, timetables, and prices in our Train Timetables section.

If you travel to Russia from Western Europe with a direct train, you will need a transit visa for Belarus (as most of the trains cross it on the way to Moscow and St. Petersburg). So, your option is either to get this visa before you travel at Belarus embassy or choose an alternate route around Belarus. All other (indirect) trains travel through Poland and Baltic States, which are part of EU and Schengen now, so if you're from US, EU, Australia, New Zealand or Canada you won't need a visa to cross them. Same goes for Ukraine, which does not require visas for short visits (up to 90 days).

If you're traveling to Russia from China, you may need a Mongolian transit visa (unless you're a US or Israeli citizen), check with their embassy beforehand. Alternatively, you can take a train bypassing Mongolia, which takes another route to Russia around the country.