Museum of History in Ulan Ude

Tweet
In Soviet times, an ‘anti-religious’ Museum was opened to store all religious art.
It was kept by very devoted people who stored the funds very carefully and in the 90s, when the ban on religion ended, the museum got rebaptised ‘Museum of History’. There are different floors displaying collections on different periods and themes: prehistoric times, Orthodox religion, and Buddhist art. The Buddhist collection consists of wooden and bronze sculptures, medical treaties and their painted illustration.
It also has in display pages of a beautiful atlas illustrating the Tibetan knowledge on medicine. It is a copy of Tibetan atlases made by Akvandazhiz (around 1920), a Buryat man who lived for ten years in Tibet, teaching Dalai Lama the 13th. He painted it with mineral pigments on Tanka, a fabric that can be rolled like a parchment. In the 30s the atlas was hidden in the attic of a monk’s place and brought to the ‘anti-religious- museum, where it was preciously kept since then.
The first page of the atlas is a diagram of the Universe in the form of a Mandala. Bouddha is represented sitting in a lotus position, his body is blue, he’s holding a Mirobalan flower in the left hand, which represents treatment. He is the teacher of medicine. Smaller scale people surround him, then on another circle, plants are very precisely represented in the space where they grow, mountains or plains. The illustrations were used as reference to spread the knowledge of medicine. It is both a vulgarisation and a pictorial translation of the knowledge explained more in depth in the written treaties.
Another page shows the development of the embryo before birth. It’s like a comic strip. The first scenes show the soul of a person in the 49 days between death and life, it has the form of a six year old transparent child. He is there when a man and a woman make love and he tries to penetrate the man’s mouth. If all goes well, if there’s good karma, the woman becomes pregnant. She is then depicted with an embryo inside her stomach. It develops in three phases: fish, tortus and pig. Some sentences accompany the schemes telling for example that the inner organs of the child are given by the mother and that the skeleton comes from the father. 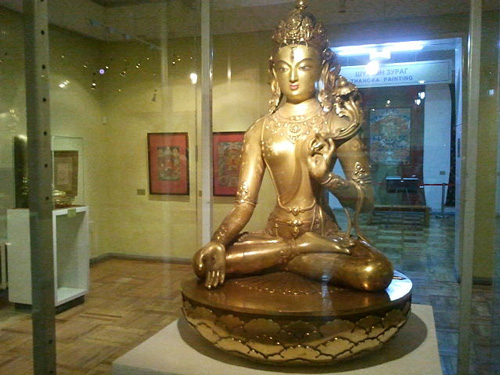 The museum also features sculptures of Buddhas and Boddhisatvas. Some were made by the famous Mongolian sculptor Dzanabadzar who lived in the end of 17th century. He was sculpting physical beauty to show inner beauty. Before visiting the museum, you can book a guided tour in English or in Russian. The lady who makes tours is passionate about her job, she’s open to questions, and can adapt the tour to your particular interests. Open Hours & Admissioin: Open Tu-Su 10 AM –18 PM. Prices for Entry/ or Entry with Excursion for: Students (5/40Rb), Adults (15/80 Rb), Foreigners (70/100Rb).

The Most Interesting Sights at Ulan-Ude

The main attractions in Ulan-Ude are the two museums (of history and of nature), Ivolginsky Buddhist Datsan, and open-air Ethnographic Museum.

The Museum of Nature in Ulan Ude is a nice place to visit to have an idea of Baikal’s fauna and flora.
Sightseeing Guide:
This free independent travel guide to Russia exists thanks to the commission we get when you order these hand-picked trusted third-party services or when you buy our book. Please, support us!