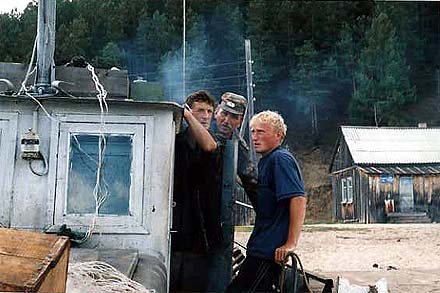 The fishermen are starting their boat (which is not so easy). This photo was taken in little Korbulik village, which is on Svyatoy Nos peninsula, which is itself about 300 km along the Eastern shore of Baikal lake from Ulan-Ude. This peninsula is hard to get to (need to take a bus and then a car, and then hitchhike for a boat). We got as far as Korbulik, and the guys there told us we should go to "Snake Bay", which is the furthest we can go. So we hired this boat (for $10) and went on a nice 30-minute journey on the lake to the "Snake Bay". Imagine: we felt we already were at the end of the world, sailing to nowhere, but when we were approaching the "Snake Bay" we saw a lot of tents, and a huge beach. I had the same feeling as when I was watching "The Beach" movie with Di Caprio (it's not that I like this movie, but the idea of finding a lot of people in a secluded place where it seems impossible to get to is exciting).
By the way, the local people are very helpful and nice, and every one of them is such a character it could take hours to talk about him (I'll do it another time).

When we got to what we call "almost the end of the world" - Svyatoy Nos peninsula, we trekked into Korbulik village, which is a strenuous 2-hour walk up and down through the hills.

About 150 km from Ulan-Ude, there's Gremyachinsk village - the first stop on lake Baikal.
Photos & Stories Guide:
This free independent travel guide to Russia exists thanks to the commission we get when you order these hand-picked trusted third-party services or when you buy our book. Please, support us!