Nizhny Novgorod is the fifth largest city in Russia and one of the most important centers of cultural, economic, and political activity in European Russia. The city lies at the confluence of the Volga and Oka rivers, 420 km east of Moscow and it’s a home to a great number of essential historical buildings. Apart from it, Nizhniy will host six matches during FIFA 2018. 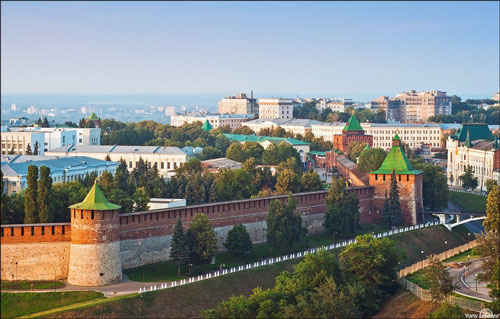 From 1932 to 1990 the city was known as Gorky, after the writer Maxim Gorky. During the Soviet period, the city turned into an important industrial center. In particular, the Gorky Automobile Plant was constructed in this period. Then the city was given the nickname "Russian Detroit". After the war, Gorky became a "closed city" and remained one until after the dissolution of the Soviet Union in 1990.

The city is full of historic buildings, universities, museums, and churches. One of the central sights is Kremlin which is situated on the hill from where a stunning view of the city opens.  Designed by an Italian architect, the 13 magnificent towers and the 12 meter high walls of Nizhny’s Kremlin date back to 1500. To enjoy another picturesque perspective on Nizhny one can take a cable car ride. The 3660m long gondola lift connects Nizhny to the town of Bor and stretches across the Volga River for 900 panoramic meters.

Being a birthplace of a famous Soviet writer Maksim Gorky, Nizhny carefully saved his home which is now a museum, which has not changed much since his times. One can fully experience a unique lifestyle of the father or Soviet social realism there.

If one looks for some cultural vibes in between FIFA matches The Nizhegorodsky State Art Museum, The Rukavishnikov Estate Museum, The National Centre of Contemporary Art and The Sakharov Museum dedicated to dissident Russian scientist Andrei Sakharov are the places to visit and get a serious grip of Soviet and Russian art.

Another good-to-know tip is that Nizhny is home to a unique museum of wooden architecture that very few people know about. It’s an open-air museum and features numerous ancient wooden churches, houses, and wells.

How to get to the Stadium

By public transport In preparation for FIFA even a new subway station “ Strelka” is panned to be launched in May 2018 right in front of the Stadium.

The Stadium was specially built for FIFA 2018 in Nizhny Novgorod.

During FIFA 2018 Nizhny Novgorod will host six matches at the newly built Stadium on a so-called Strelka of the city where Volga and Oka conflow.
Nizhny Novgorod Guide:
This free independent travel guide to Russia exists thanks to the commission we get when you order these endorsed third-party services or when you buy our book. Please, support us!