Sochi is the biggest part of Caucasian Riviera, only subtropical resort city that stretches along the picturesque coast of the Black Sea. 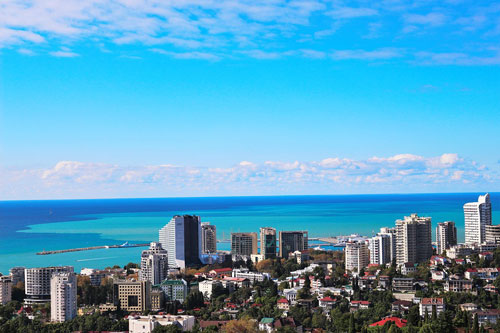 Sochi set in the Krasnodar Krai which stretches 145 km (90 miles), making Sochi the second longest city in the world behind only Mexico City.
The history dates back to Ancient Greek people and Romain times.The first Russian settlement on the site was called Fort Alexander founded in 1838 at the mouth of Sochi River. In fact Sochi is a relatively new name for the city, as it was first called that in 1896.
Actually, Stalin brought this place a bunch of fame, building his summer residency here. One can still find tonnes of spas, recreational centers, family hotels and anything one could imagine at a resort area.
Sochi hosted XXII Olympic Games in 2014 and will continue using it facilities in 2018 for FIFA. Apart from that one can enjoy natural resources as Sochi National Park and many other historical spots which represent unique Russian culture.
This free independent travel guide to Russia exists thanks to the commission we get when you order these hand-picked trusted third-party services or when you buy our book. Please, support us!
russian visa
train tickets
guide book
hotels
car rentals
travel insurance

Going out and Sightseeing in Sochi

Sochi is a real Russian riviera, so there's some cool stuff to see and to do.

How To Get to Fisht Stadium

Fisht Stadium is located in the Olympic Park, and the most convenient transport from Sochi and Adler is the commuter train.

The main place for all FIFA matches is Fisht Stadium.
Sochi Guide:
This free independent travel guide to Russia exists thanks to the commission we get when you order these hand-picked trusted third-party services or when you buy our book. Please, support us!