Author: waytorussia (on 21 Sep 2022)
Tweet
This article was written in response to the "Interviews with Vladimir Putin" released by Oliver Stone in 2017. We saw it as an attempt to reconcile the different points of view, and as one of the last invitations to negotiate and avoid further escalation.
"Interviews with Vladimir Putin" by Oliver Stone is probably the most comprehensive video portrait of Vladimir Putin made by a westerner. The 4-series feature received negative feedback from most of the mainstream western media, including The New York Times and Newsweek. Oliver Stone himself was grilled on TV for being too lax with Putin on many issues that are of concern to the worldwide community. However, most people who criticize Stone for being too "nice" to Putin miss a very important point: the context. Oliver Stone's goal was not to expose the Russian president. Rather, this mission was to make the first step towards a truce between Russia and the United States on the political level.
The way Stone approached his subject was not the same that an investigative journalist would use. Yes, he could have asked about the suppression of Russian opposition, about Navalny, he could have questioned the loose facts, and lavish lifestyle of Russian bureaucrats. What would that change, however? Does anyone really believe that Putin would ever change his stance on these issues just because someone asked him about it? Stone would probably be denied further access and even if it was not the case he'd end up with a very stereotypical portrait of the vilified Russian leader that we've seen almost too many times.
Oliver Stone seems to have a mission. The way he carefully phrases his questions, the way he does not pursue further, and the way he shows that there is a different point of view in the US and that not all Americans see Russia as an enemy indicates that. His task is not to open the eyes of the Russian president to discrepancies that he's probably very well aware of. His task is to show the Russian president that there are people out there who don't share the consensus that the Russian state, in a political sense, is an enemy. That Putin is a dictator. That Russia wants to take over the US and the rest of the world. Stone's function in the making of his documentary is to change the opinion of his subject in the "soft way" of Judo – the same approach that Putin is talking about in the first episode of the film. "It's sometimes OK to lose, to let go here and there, in order to win after". This is what Stone does very skillfully: at the expense of his own reputation he loses as a documentary-maker and a journalist, but wins as a peace-maker. Showing a more humane picture of the Russian president to the world he attempts to open a door for dialogue. Showing a more humane picture of the American public to the Russian president, in numerous personal exchanges, he makes it much more likely that Putin himself would do the first moves toward that dialogue.
Stone's function is not to reveal "the real" Putin to his viewers; instead, he (perhaps inadvertently) attempts to take Putin out of his bubble, to show to his subject that the world around him may be different than what it appears to be. The fact that there is a bubble is undeniable: it was avidly demonstrated in the scene where Putin shows Stone the footage of a Russian military operation in Syria, which turns out to be a re-edited footage of US operations in Afghanistan. The most striking part of this scene is that Putin, who is known to not use the internet, shows the footage from an iPhone screen. Which brought some bloggers to believe that the Russian president exists in a kind of informational field reminiscent of the North Korean internet: a closed-off walled garden where information gets in only at the discretion of press officers. If that is true, that's the real weak spot of the whole system. And hopefully, this blunder can help change it, as well as the 2-year ongoing conversation with a prominent director who does not vilify Russia as most celebrities do.
Many filmmakers can learn a lot from that: especially investigative journalists, whistleblowers, and photographers who tend to think that exposing the truth is a universal answer to everything. No, it is not. The truth is out there, but it's a very subjective matter. And if you can change the opinion of your subject, maybe even a little bit, you're also changing what this truth may be. 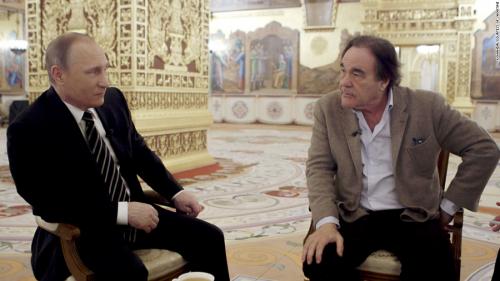 This article was written in 2011, after Putin announced that he was going to get elected for the 3rd term.

How Sanctions May Radicalize Russia

This article was written on the 11th of March 2022, two weeks after the "special military operation" in Russia was announced.
Russian Politics Guide:
This free independent travel guide to Russia exists thanks to the commission we get when you order these hand-picked trusted third-party services or when you buy our book. Please, support us!