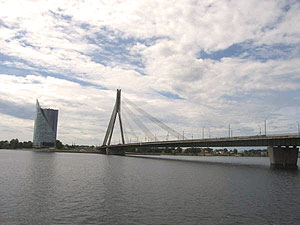 With more than 800 years of history, Riga is a picturesque little town situated on the Daugava River, not far from the Gulf of Riga and the Baltic Sea. Latvia’s capital city isn’t a place that has world-famous landmarks or anything to really grab your attention. But it is a peaceful and very beautiful little city with a well-preserved and delightful old town. It is clean, enjoys all the Western conveniences and is very European in character.

Latvia’s modern history  has been closely intertwined with that of Russia. In fact, the relationship dates back much further with records of Russian merchants reaching modern-day Latvia as early as the 13th Century. Today some 43% of Riga’s population is ethnically Russian, making this a truly bilingual city. Walking the streets you will pass people speaking both Russian and Latvian. Go into one establishment and you will be greeted in Latvian, in another you will be greeted in Russian. However, it is much rarer to find Russian in written form anywhere. 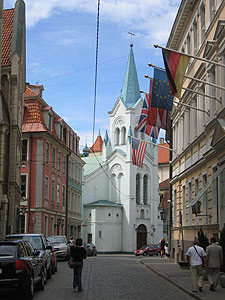 Riga has a reputation as a party town. While this reputation might be exaggerated, there are plenty of ways to keep yourself entertained in the city with some first class cafes, restaurants, bars, clubs and live music venues. Since budget airlines started including Riga in their schedules it has become much more tourist-oriented. It has also become popular with young European men looking for a cheap place to drink and party for a few days. 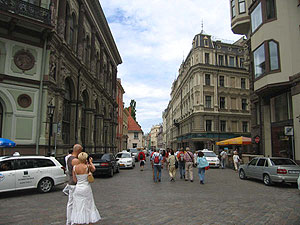 would give you enough time to get a feel of the city and see most things of interest, while three days is a perfect amount of time to explore the city properly. That said, if you chose to stay longer you could easily fill in the time or use the city as a base to explore some of the surrounding parts of Latvia. Serene and laid-back, pretty and appealing, Riga might not be one of Europe’s most exciting destinations but it is a charming little city that you will be glad you visited.

Sorry, but there was a problem downloading the map. If you see this message, please, contact Way to Russia Support.

Going Out & Sightseeing in Riga

Old Town Hostel.
Riga Guide:
This free independent travel guide to Russia exists thanks to the commission we get when you order these hand-picked trusted third-party services or when you buy our book. Please, support us!