Circum-Baikal railway was built more than a hundred years ago, and is an outstanding landmark to the construction and engineering art. There are a lot of beautifully constructed tunnels and bridges along the way, making Circum-Baikal somewhat of a railway monument. 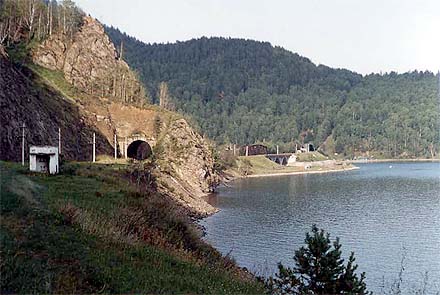 The railway was supposed to be a continuation of the Trans-Siberian railway, and was very important for Russia strategically. That was the reason why such complicated project was ever started. The volume of earth-moving work done on every kilometer of the way was equal to 400 carriages that may be compared to the volume of work done during the Suyuz Channel construction (which was one of the greatest jobs of the 20th century in USSR). 424 engineer constructions were built along 84 kilometers-long stretch of the road from Khultuk to port Baikal including 39 tunnels with the total length of 8994 meters, 14 kilometers of supporting walls, 47 stone and 3 iron galleries. 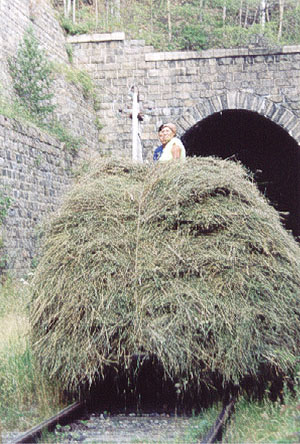 The Circum-Baikal railway was used for Trans-Siberian trains starting from 1904 until 1950s, when the new railway from Irkutsk to Slyudyanka was built.

Nowadays, Circum-Baikal is a quiet picturesque route. There are a few trains every week, and tourists like to come there to spend a few quiet days at the tour bases or camp on the beach. There are a few villages along the way.

Map, Location & How to Get There & Back:

Circum-Baikal Train Schedule: Trains depart from Slyudyanka (reachable via Trans-Siberian - or with a car from Irkutsk or Ulan-Ude) Mon, Wed, Fri, Sat, Sun from Sludyanka at 14.20 and take about 5 hours (at the best) to get to Port Baikal (which is next to Listvyanka). A ticket costs about 30R ($1). There’s a ferry from Port Baikal to Listvyanka and usually it waits for the train, if it’s late. 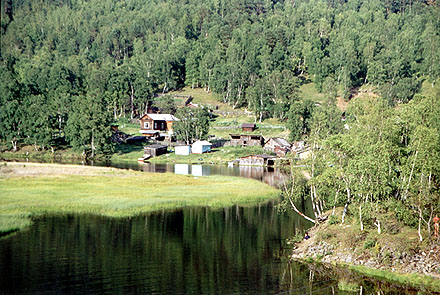 The Circum-Baikal is measured and thought about in kilometers. Every kilometer has it's own significance. Local people say: ok, meet you on the 102. It means they'll meet at the 102 km of the railway.

The best portion of Circum-Baikal to walk is from 112 to 98 kilometer. There’ll be Baikal along the way, two longest and darkest tunnels (800 and 1000 meters long), a couple of bridges, nice beaches, real villages where you can buy milk and veggies from the locals and good places to put a tent. The beach on the 110th kilometer (before and after the tunnels) is the most popular destination for Russian backpackers, who come there from the nearby cities (Irkutsk, Angarsk) for holidays or weekend. Sometimes, depending on what people there are, these beaches become nudist beaches for a period of time. 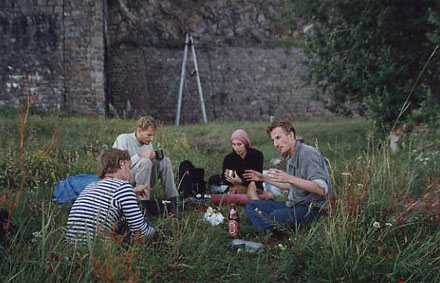 The longest tunnel is before the 98th kilometer.

Shumikha Tourbase. A tourist base on the 102 kilometer. A very nice place to stay on the shore of Baikal in a quiet green area. The rooms are very cozy and neat, cost 750 R ($23) per person a day. The toilets and bathrooms are in the corridor. Strangely enough, even though the price is relatively high, it seems appropriate for what there is. Usually, the rooms are completely booked by the Russian and foreign group tourists, however, if you come for a day or two there might be something available. If you want to be sure, better book in advance.
For reservations contact Irktusk, 2nd Zheleznodorozhnaya St., 2b. Tel: 29-46-41 (Russian language only). 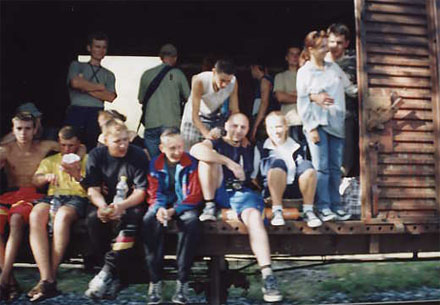 Khvoinaya Tourbase. A tourist base on the 98 kilometer similar to all the others. The price is also 750 R a day for a person.

If you don't want to deal with them directly (language barrier), send us a note through our forum and we'll try to figure it out for you.

There are no shops along the way, but every train has a shop inside and stop at every station for a few minutes, so you will be able to buy basics, such as bread, water, beer, crops, sweets. Veggies and milk can be bought from locals at the villages. 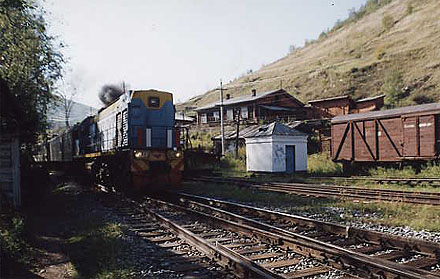 The only dangerous thing on the railway are snakes. Don't come close to the cliffs, and look where you walk, and you'll be ok.

One last thing: be prepared to meet people. You will surely have a nice conversation and a beer or two, either in the train, or outside.

Olkhon is a beautiful nude land that seems to have emerged from the fresh waters of Baikal.

Where to Go: Listvyanka Settlement on Baikal Lake

A small village 1 hour drive from Irkutsk, on the western side of Baikal, Listvyanka is the most comfortable location on the lake.

The Buryatian side of Baikal Lake (the Eastern shore) is famous for its sunny bays and sandy beaches.
Where to Go? Guide:
This free independent travel guide to Russia exists thanks to the commission we get when you order these hand-picked trusted third-party services or when you buy our book. Please, support us!