If you walk from the Kremlin to the direction of the main Lenina street, you'll see the Trading Arcades, that were constructed in the beginning of the 19th century. Next to the trading arcades, on the northern side, behind the main street, there'll be small cozy Lazarevskaya and Antipievskaya churches, and with candle light and church incense emanating through the small entrances. 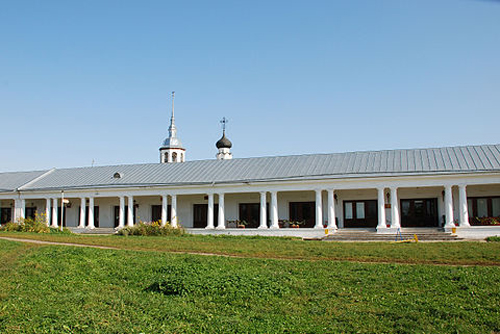 If you walk further along Lenina street, you'll see long walls on your left, made out of red brick and covered with thick layers of white paint. It is Rizopolozhensky monastery, founded in 1207. Most of the buildings inside and the walls were built later, in the beginning of the 16th century by Russian craftsmen. 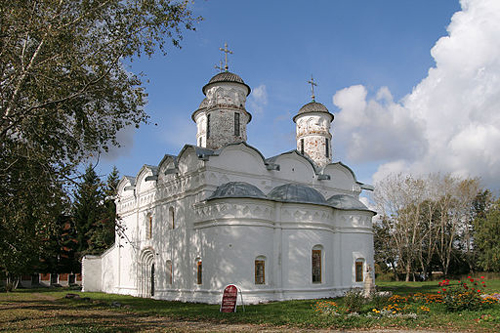 Inside the monastery there's a three-dome Rizopolozhensky cathedral decorated with frieze, built in the 1520s. A tall bell-tower of the monastery was built during 1813-1819 by a stone-mason from Suzdal.

If you walk further to Kamenka river you'll get to Alexandrovsky convent, which was founded by Alexander Nevsky (who used to be a prince of Rostov-Suzdal principality) in 1240. Nothing is left from that time, the Tserkov Vozneseniya (Ascension Church) and the bell-tower were built in the 1695. The stone wall with small towers around the monastery date back to the first half of the 18th century.
Nowadays, the convent is quite lonely place, only an old man is grazing his goats there, and just a few steps away there's a steep shore of Kamenka river with a nice view to Pokrovsky convent. 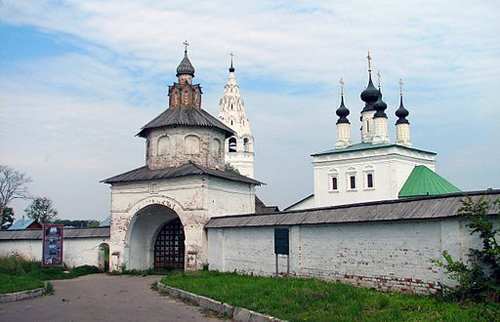 If you walk back to the Lenina street and walk up, you'll see the old Saviour-Euthimiev monastery-fortress. It was founded by the prices Euthimiev Monastery of Suzdal - Nizhni-Novgorod principalities in the middle of the 14th century.

First, there were just a few wooden buildings, but when in the 16th-17th centuries Russian princes, tsars, and nobles donated bulk of their fortunes to the monastery, a new monastery-fortress was built there.

The stone walls around the monastery, which were built in the end of the 17th century are 1160 meters long, 9 meters high, and 6 meters thick. The towers of the monastery were used to observe the surrounding, to protect the town. The most outstanding is the cubic 22 meters high Proezdnaya tower on the corner of monastery walls. 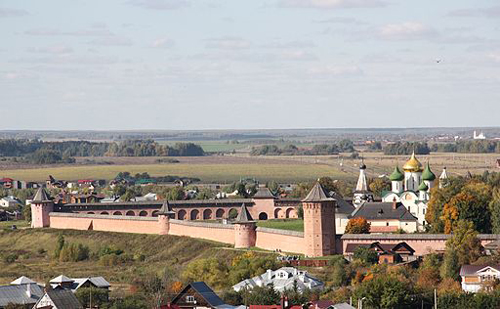 The core of the Euthimiev monastery is Spaso-Preobrazhensky cathedral, which was built in 1594. It is a typical Russian cathedral, that unites various styles of Vladimir-Suzdal architecture. Inside, there are wall paintings, made in 1689 by masters from Kostroma, under Gury Nikitin and Sila Savin supervision (they are the famous Russian fresco-painters of that time).

Next to the eastern wall of the cathedral there's a tomb of the Russian moble Dmitry Pozharsky, one of the leaders (the other one is Minin) of the riot against the Polish envaders. You can see a monument to them next to St Basil's cathedral in Moscow.
This free independent travel guide to Russia exists thanks to the commission we get when you order these hand-picked trusted third-party services or when you buy our book. Please, support us!
russian visa
train tickets
guide book
hotels
car rentals
travel insurance 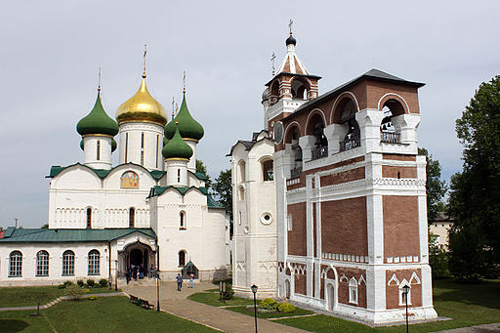 Next to the cathedral there's a bell-tower built between the 16th and 17th centuries. In the year 1766 the emperess of Russia Ekaterina II founded a prison in the monastery, where she would put those, who were against the church and monarchy.

After you see the insides of the monastery, you can walk around its walls and enjoy Suzdal's countryside: there are low wooden houses, grazing goats and sheeps, and an amazing view of Suzdal and of Pokrovsky convent across the river Kamenka. You can walk down the steep footpath to Kamenka river, cross the wooden bridge, and come to the walls of Pokrovsky convent. 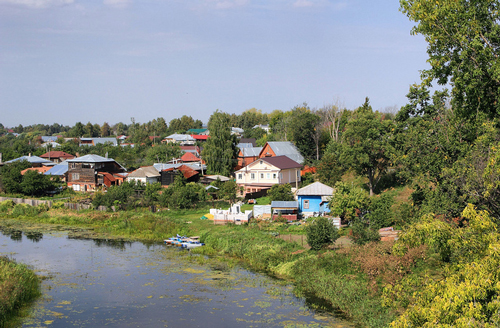 After spending few hours in the historical centre of Suzdal, instead of heading straight off to the next city of the Golden Ring, it's worth taking a moment and make a stop in a small village nearSuzdal - Kideksha.