Author: alexandra (on 20 Aug 2018)
Tweet
Saransk is the capital city of the Republic of Mordovia, Russia, as well as its financial and economic center.
The city was founded as a fortress in the south-eastern outskirts of the Russian kingdom in 1641. It was part of a large fortified line stretching from Belgorod to Simbirsk. The city was named after Saranka river flowing through the city. “Sara” means “a muddy place” in the languages of the Finno-Ugric group, which were originally spoken here. 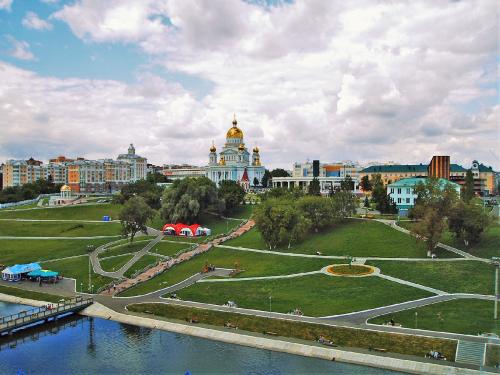 It has never been one of the main Russian cities for tourists to visit. However, now it is gaining more and more attention making an accent on promoting sports as well as it’s historic heritage.
There are more than 40 churches and chapels in Saransk and its surrounding area. If you are interested in the local culture of the region there is a Museum of Mordovia Folk Culture with a vast collection of icons, wooden sculptures, and national costumes. It is a unique chance to experience the history of the life of Mordovian people. Mordovskoye Podvorye ethnographic museum complex which was open recently is also worth visiting as it’s collection is presented in an open-air museum.
The city itself is quite small, so the best way to explore it is by walking, exploring the architecture, dropping by to churches and cathedrals, breathing deeply the air of the Insar River and chilling at green areas of the city such as Pushkin Park.
A curious fact about Saransk is that since 2013 it became the city of residence for Gerard Depardieu who got Russian citizenship to escape France’s income taxes. He renovated a cinema here and established a cultural center named after himself. Watch a film in Gerard Depardieu’s own cinema, a treat for his Russian fans.

The Best Hotels in Saransk

It's best to stay in the center of Saransk, so you can enjoy the historic center and parks around.

Going Out in Saransk

Here some ideas for where to eat inSaransk: stay localand visit family restaurants.

As many others stadiums in Russia construction works of Mordovia Arena or Saransk Stadium was speeded up and completed specially for FIFA 2018.
Saransk Guide:
This free independent travel guide to Russia exists thanks to the commission we get when you order these hand-picked trusted third-party services or when you buy our book. Please, support us!