Author: Maria Mushtrieva (on 29 Apr 2015)
Tweet
Ulan-Ude is the first city along the Trans-Siberian that feels like you’ve finally arrived to Asia. That is, after already traveling 3000 km into it. It’s the capital of Buryatia republic and most of the people there practice buddhism, so it’s also very different from the rest of Russia which is mainly atheist or orthodox Christian.
Introduction to Ulan-Ude
Ulan Ude, the capital of Buryatia, is located in the middle of vast Siberian steppes, on the 5640th kilometre of the Trans-Siberian railway. It is a very unusual and charming city. The first striking impression is an unusually calm and mellow way of life, distinct features of people (more than 50% of people in Ulan-Ude are native Buryats with canny almond eyes), and a slightly chaotic look of the city.
This peculiar mix made me feel that after I made 3000 kilometres through the Asian part of Russia, finally I’m in Asia. However, in some parts of Ulan Ude the “Russian part” comes into play: a huge head of Lenin on the central square, Soviet style hotel buildings, some remains of the typical 19th century architecture, traditional wooden houses along the streets. And at the same time little Korean passenger minibuses are rushing back and forth, like rickshaws, an old Buryat woman is selling hot juicy Pozas (traditional meat dish) on the street, the sun is unbelievably bright and hot, and you see the tips of the mountains surrounding the city… 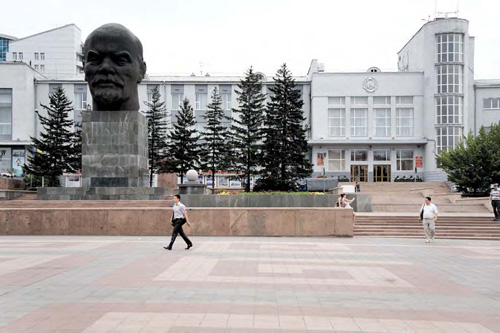 Ulan Ude is a very interesting place to stop for a few days on your way along the Trans-Siberian: apart from its peculiar feel, there are a lot of other things to experience. The local openair ethnographic museum tells an interesting story about the life and traditions of native Siberians (Buryats and Evenks), as well as colonizers (Cossacks and Old-believers), Ivolginsky Datsan is a center of Buddhism in Russia.
Besides, the Buryatian side of Baikal lake is easily accessed by transport (unlike the hilly shore of Irkutsk side). If you endure a 3 hour trip through the mountains on the way to the lake, you’ll be rewarded: after the first 250 kilometers, the road goes along the shore of Baikal, so you can hop on a bus or a car, hop off whenever you want, and camp on the sandy beach with Baikal just 10 meters away! Otherwise, if you don’t feel like camping, you can stay at a local’s place, especially that local people are very friendly and open to visitors. There are also a couple of sanatoriums along the way, so you can get a hotel-like room for yourself. 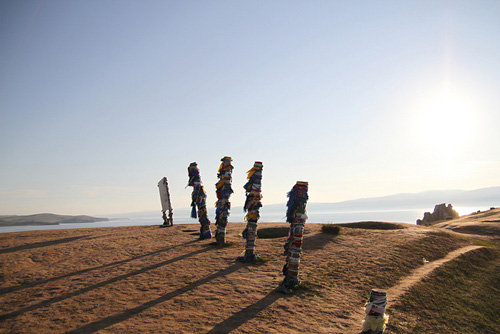 Travel Highlights
We highly recommend you to stop in Ulan-Ude, so we prepared a list of the most interesting things to do while there:
1) Spend a couple of days in the city, walk around, visit the local History Museum (great expositions of local and buddhist culture) and Museum of Nature (interesting exposition about history, flora and fauna of Baikal lake).
2) Eat out in a chinese restaurant. Ulan Ude is relatively close to China, so there are many inexpensive restaurants with tasty Chinese cuisine.
3) Go out of the city to visit Ivolginsky Datsan (30 minutes by bus). It is located in a dale surrounded by the mountains – very picturesque. There’s also a village nearby, and a cheap hotel inside the Datsan. If you like camping, it is a perfect spot. Just go behind the Datsan and put your tent there. In the morning you can refresh yourself in a small lively river.
4) Visit the Ethnographic Museum (10 mins by bus from the centrum + 15 minutes walking). You can learn there about history and traditions of native tribes (Buryats and Evenks), see how they yurts looked like, and compare it with samples of Cossacks settlements. You can go inside all the houses, and see how people lived many years ago. History of Ulan-Ude.
Originally, there were Buryat people living in the area around Ulan-Ude. A Buryat person has a very affective attitude towards his land and animals. It gave a rise to many legends, and it’s not rare even nowadays to see a skilled Buryat person riding a horse along an endless steppe. Harsh natural conditions and winter colds were making it hard to grow any crops, so the main occupation that was providing food and shelter for Buryats was cattle-breeding and they were very proficient in this.
A powerful and intimidating Mongol kingdom was the nearest neighbor, and their ambitions to submit Buryats to their rule were a source of great insecurity for local people. Buryats are naturally peaceful and calm people, so they were not excited about the idea of fighting with Mongols. Perhaps, that is one of the reasons why the first explorers and calonizers from Russia – Cossacks – were so peacefully accepted by Buryats. Another reason (that is more like a legend) is that early Cossacks were giving Buryats “fire water” – vodka – in exchange for furs and meat, and in this manner weakened Buryats.
Anyway, in the 17th century Cossacks established several of their ostrogs (fortresses) on the territory of modern Buryatia, and one of the most important one was Udinskoe, at the place where modern Ulan Ude is located. Strategically, Udinskoye was a perfect place located on the trade way between Russia and China. Besides, it was very well fortified, and surrounded by the mountains.
In 1768 there was the biggest fair in Eastern Siberia established in Udinsk. And in 1775 Udinsk was granted the city status. In 1899 Udinsk, called Verhneudinsk then, has got another boost in its development: the Trans-Siberian railway was constructed through the city, leading further to China. Verhneudinsk improved its trade importance. During the Soviet times, the whole region became an important industrial and agricultural center. Machinery and metal processing industries (for example, locomotives production), wood processing plants, and farms were established there. In 1934, as a part of government policy – giving the cities the ethnic names, Verhneudinsk was renamed intro Ulan Ude, which means “red uda” in Buryatian language (“uda” is the name of the river, where Ulan Ude is established).
Nowadays, even though the overall level of production and agriculture is far from perfect, Ulan-Ude is striving, and it seems that it’s doing relatively well, even though there’s still high level of poverty in Buryatian republic. There are a lot of scientific institutions in Ulan-Ude, and it is delightful that they develop not only in a traditional way: for example, there’s a department for Indo-Tibetan medicine studies in Buryat scientific center of Russian Science Academy in Ulan-Ude.
Besides, the historians are actively studying the past of native people and are making startling discoveries: in August 2002 the city history museum exhibited fragments of old Buryat buddhist attributes, as well as the rare Tibetan Medicine Atlas.
Moreover, it is evident, that people are getting back to their origins: old shaman traditions and buddhism. Shamanism is gaining people’s interest again. Buddhism that was brought to Buryatia hundreds of year ago and then suppressed by the communists, is becoming popular again. The new Datsans (Buddhist monasteries) are being built, and Dalai Lama himself visited Ivolginsky Datsan in 1992 and encouraged local people to continue their religious practices.
General Facts about Ulan Ude
The time zone is GMT+8 or Moscow+5. All trains going along the Trans-Siberian stop in Ulan-Ude. It takes 7 hours by plane from Moscow, otherwise, you can take a train and it’ll take about 4 days from Moscow, or 2 days from Beijing. Irkutsk is 7 hours by train from Ulan-Ude. A one-way trip to Moscow costs about 4000 R ($130 US) by plane and about 3000 R ($100 US) by train.
Ulan-Ude is situated at the junction of two rivers (Uda and Selenga) between two mountain ranges: Khamar-Daban and Ulan-Burgasy. Although the city looks quite big on the map, it’s doesn’t seem so if you stay in the center. The main street is Lenina street, along which most hotels, some museums, and shops are located.
The railway station is located in the center, about 5-10 minute walk to Lenina street. The bus station is also in the center. It is easy to move around in minibuses, because there are many of them and it takes not long to get to any part of the city.
Generally, climate is very contrast: in summer it may be very hot, and in winter it may be freezing. But when we were there during the summer, it was ok, quite mild. Also, the whole Buryatia, and Ulan-Ude particularly, is considered to be the place where there are the most sunny days during the year, comparing to other places around. It seems true, because for two weeks we were there, it never rained.

Practical Advices for Travelers in Ulan-Ude:

Traveling around Ulan-Ude & to Baikal Lake

Ulan-Ude is located about 250 km from Baikal lake, but if you take a bus or a shuttle, you'll be able to get there in 3 hours.

Ulan-Ude is located on the Trans-Siberian railway (7 hours after Irkutsk), so all major Trans-Siberian trains stop there.
Ulan-Ude Guide:
This free independent travel guide to Russia exists thanks to the commission we get when you order these hand-picked trusted third-party services or when you buy our book. Please, support us!