Author: Dimitry Paranyushkin (on 19 Jun 2019)
Tweet
The first impression is usually the strongest one, so here's all the information you'll need to make your arrival to Moscow go as smooth as possible.

Flying to / from Moscow

If you take a domestic flight, it'll be either to / from Sheremetyevo 1 or Domodedovo airports.

To get from the airports to the center of Moscow you can take Aeroexpress train, which is the fastest and easiest way to get to the city. A train ride takes about 35-40 minutes and costs about 500R (€8) one way. Tickets can be purchased on the spot or using Aeroexpress iPhone app.

You can also get a taxi from the airport. On average a trip to the center of the city takes about 1 hour (can be more during peak times and less in the night and on the weekends), prices start at €20 one way if you order a taxi through Uber or Yandex.Taxi. The problem is that there are many taxis outside and no designated waiting point, so if you don't speak Russian and don't have a Russian phone number it may be hard to coordinate with the driver. You can use one of the taxi desks at the airport (then you pay about €30 to €50 for a ride) or you can also order a transfer from the airport to any address in Moscow online through our site. We pass your orders to a reliable partner: they have English-speaking drivers, 24-hour customer support, and confirm within a few minutes.

Arriving / Departing with a Train

There are 9 train stations ("vok`zal" in Russian) in Moscow. Each has the name of the main direction for the trains that depart from this railway station. All the railway stations are located close to the center of the city. The three train stations "Kazanski", "Yaroslavki" and "Leningradski" are located at the same area next to "Komsomolskaya" metro station (north-east center) and that's the stations you will use most likely to go to St. Petersburg or Trans-Siberian. 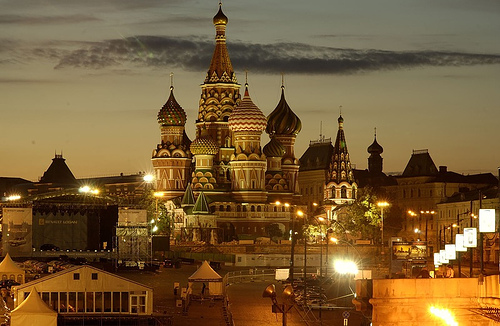 That's the main bus station in Moscow located at the east of the city (25 mins by metro from the center). To read more about it, please, see Moscow Bus Stations page.

Located 10 km south-west from Moscow, this airport was recently renovated and is now one of the most modern ones in Moscow.
Transport Guide:
This free independent travel guide to Russia exists thanks to the commission we get when you order these hand-picked trusted third-party services or when you buy our book. Please, support us!