Author: waytorussia (on 02 Dec 2014)
Tweet
There are 9 train stations ("vok`zal" in Russian) in Moscow and all of them are located in Moscow center. The three train stations: "Kazanski", "Yaroslavki" and "Leningradski" are located at the same area next to "Komsomolskaya" metro station (north-east center). Yaroslavsky train station is where the Trans-Siberian trains depart from, while Leningradsky station serves St. Petersburg trains. 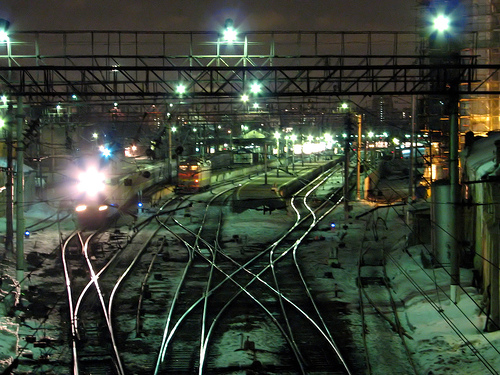 Approaching Kursky Vokzal – Photo by PPK@FlickR
To get to a railway station, you can use the metro (usually the railway stations are just outside the metro exit) or taxis.
See the Transportation section to learn how to buy the train tickets and other useful tips on inland travel in Russia.
If you need train schedules, they are available online on Way to Russia train timetable page.

Where: metro "Paveletskaya" (green or brown ring line, south), phone: +7 (495) 235-0522
Trains to and from: south of Moscow, Domodedovo Airport
This free independent travel guide to Russia exists thanks to the commission we get when you order these hand-picked trusted third-party services or when you buy our book. Please, support us!
russian visa
train tickets
guide book
hotels
car rentals
travel insurance

Check out our online train timetable to know where your train departs from!