Author: waytorussia (on 01 Jan 2019)
Tweet
Gone are the times when the Russian police was acting lawless. Nowadays if you get stopped it is usually for a routine check and you will be able to get out from it quite easily, if you deal with them in a calm way and show that you know your rights. It is also important to know that if they know you're a foreigner, they will usually treat you quite well. First, because of the language barrier. Second, because nobody wants to have to deal with your consulate should the problems arise (something for you to keep in mind). Be aware that you have a legal right to film the police while they are questioning you.

Situation: If You Get Stopped by the Russian Police on the Street

You may be stopped by police on the street (or while driving a car or a taxi) for a routine document check. This is not something to be afraid of and there's a very simple algorithm of action in this case that will help you avoid complications. The main advice is to be polite and to avoid escalation (especially towards conflict and violence) even if you are being provoked. If you physically resist a police man or offend him this can be considered as a real criminal offence, so avoid it at all costs.
Step 1: The policemen should a) introduce themselves (the name. and the surname) and b) the police department they are from. They should also show you c) their police badge and tell you d) the reason for stopping you.
If some of this information is missing you can ask them to provide it. If they refuse to provide it you can call the local duty office (dezhurnaya chast) or to so-called USB (Управление Собственной Безопасности), which is the police auditor organization: +7 499 317-24-66. It is also possible to call 112 directly (or +7-4912-02 from a mobile phone) — in this case the call will be recorded, which can then work in your advantage if the situation escalates — and explain them the situation. Finally, if you don't speak Russian you can call the emergency number of your embassy, tell them where you are, what's going on, and ask them to call USB for you.
Step 2: You have the right to ask the police to show you their ID first. Even if you believe they are authentic policemen it always makes sense to ask them to show the ID (if they haven't done it) because it will indicate that you know your rights and the legal procedure. You can write their details down or make a photo of it on your phone.
Step 3: Once you exchanged the formalities, you have several choices. You've already shown you know your rights by asking them to show their ID, so no need to escalate further. If you have your passport with you and all your documents are absolutely fine, it is better to show them all the papers (from your own hands). This will take a very short time and usually resolve the situation very quickly (they'll see you're all good, wish you a good day and leave). If you feel like playing games or you don't have your documents on you, you can choose to either tell them your name and details verbally or escalate a little to make it clear to them that you will be not so easy to deal with (they might just decide to save their time and avoid dealing with you in this case).
Step 4: You can ask them to clarify the reason why they want you to provide the documents. Usually the police needs to have a formal reason, which is called "orientirovka" (ориентировка) in Russian: a description of somebody who looks like you who committed a crime. This will usually be a written description and a photo, for example.
Step 5: If you don't  have the documents with you, you can tell them you forgot them at your hotel and show a scan from your phone or elsewhere. This may not be sufficient and in this case the police has the right to take you back to your hotel to check your documents or to take you to the police station (for not longer than 3 hours) to find out your identity. Usually they probably won't bother if you're a foreigner. If they decide to take you to the police station tell them you will call to the embassy to inform about the situation and your whereabouts — you have the right to do that.
If you have a Russian residency permit or a Russian passport you can also ask them to check your identity over the radio with their police department. In this case you can provide your name and your date of birth and this should usually be enough info for them.
Step 6: In rare cases they may want to ask you to show what you have in your pockets. They have the right to do that, but they don't have the right to search you on their own. If they just ask to show you what you have on you, this is called "osmotr" and this can only be done in the way that you show everything you have by yourself (without undressing). In case they want to search you (this is called "dosmotr") they need to produce a special protocol of the search and find two independent witnesses who are going to sign it. It is illegal to do it otherwise. If they start to search you without the witnesses and without the protocol, you can start filming them and / or call your embassy, but do not physically obstruct their actions. 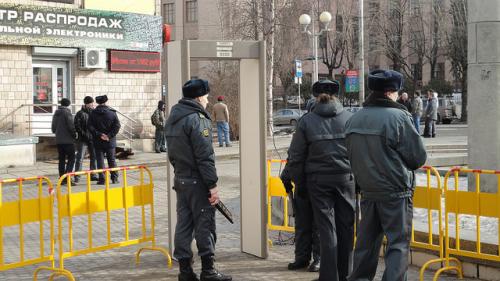 Situation: Stopped by Police while Driving a Car

If you got stopped by police while driving a car, you should simply follow the requests and show your documents:
a) Your driving license (no need for a Russian translation if it's an international plastic card one with a photo);
b) The documents for the car (usually called "tech passport" with all the car's details);
c) The insurance policy for the car;
After the police checks these three documents, they also have the right to look outside or inside the car (visually — called "osmotr" in Russian), however, they don't have the right to search you or search anything inside the car (called "dosmotr" in Russian).
They can ask you to show the alarm reflectin light or the medical aid (which you are obliged to have with you) but they cannot actively start searching the car or the passengers. In case it happens they need to produce a protocol and find two independent witnesses. If you feel like something is going wrong, call your embassy or 112.
The police has the right to ask you to breathe in the alco-tester. If you refuse to do that you can be taken to the police station for a blood test. Usually it is adviseable not to have any alcohol at all, but if the tester found something that exceeds a very low limit. Currently it is 0.16 promille — which is not high, because sometimes the device itself has an error margin of 0.1, so it's better not to have any alcohol at all in your breath when you get checked. If you went above the threshold, you still have a chance if you contest the validity of the measuring device. You can write a special paper that says that you don't refuse the medical check but you don't agree with the data obtained with the testing device. In which case you will be taken to the police station for a blood test. The threshold of alcohol in blood is 0.35 promille. If the repeated test exceeds this amount you will be fined 30 000 R ($450) and your driving license will be taken away for 1.5 to 2 years.

Alcohol Limits While Driving in Russia:

As mentioned above, the current limit of alcohol in breath is 0.16 promille (for example, it's 0.5 in most European countries, so 3 times less).
You should be aware that for a 70 kg person the average time it takes for the body to get rid of the alcohol is about the following: 300 mg of beer — around 2-4 hours, 150 mg of wine — around 3 hours, 100 g of vodka — around 5 hours. If you drank a lot the day before (like more than 300 g of vodka) allow about 12-20 hours for the alcohol to leave your body. Usually it helps to drink slowly, like 1 dose (50cl vodka / 300 mg beer) per hour, in this case the alcohol leaves your body about 50% faster. You can use this online calculator to have a general idea. This is not a legal or medical advice and this number depends on your weight and metabolism.
This free independent travel guide to Russia exists thanks to the commission we get when you order these hand-picked trusted third-party services or when you buy our book. Please, support us!
russian visa
train tickets
guide book
hotels
car rentals
travel insurance

The state health system in Russia in general is far from being good, but it is not as bad as one could imagine and it's free.