Author: waytorussia (on 01 Feb 2015)
Tweet
After the death of Peter the Great and until the second half of 19th century Russia remained ambitious and aggressive empire. Russian Emperors were focused on expanding the territory and military power of the state.

However, it was also the time for a serious political change, and even though a few attempts to reform the country failed, they paved the way for such important events as the abolition of serfdom, forming the first Russian parliament, and important economic reforms.

As the result of these wars Russia joined Crimea, part of Poland, Georgia, Northern Caucuses, Finland, more territories in Siberia. Domestic policy was not so successful.

The power of the emperor was still absolute while peasants remained in serfdom and this troubled the economical development.

Several well-educated nobles wished to reform the country in a France revolution way but their projects were not used. 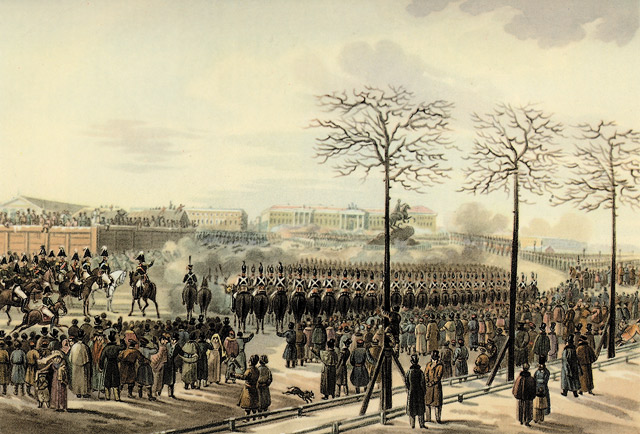 They attempted to make a revolution but their armed revolts in 1825 in Saint-Petersburg and Ukraine were easily defeated by the state. Because the riot happened December, the rebels were called Decembrists.

It took about 60 years for the state to get ready for the reforms. Emperor Alexander the Second issued the bill granting personal freedom to the peasants only in 1861.

The second half of the 19th century was marked with the growing instability in the state. Many oppositional parties as well as terrorist groups occurred.

People demand further reforms – constitution and parliament. One of the countless oppositional parties raised in 1861 in Minsk.

It was called then RSDRP (Russian Social-Democratic Party), later they started to call themselves Communists.

The 20th century in Russia started with the catastrophe -Russia lost the war against Japan.

Despite that Russia managed to sign a beneficial peace treaty (we had to pay a contribution and lost almost no territories), the consequences of the war were hard to underestimate.

This failure showed the ineffectiveness of the state system and lead to the numerous riots and strikes all over Russia in 1905-1907.

These two years lasted uprisings were so dangerous for Empire that later were called the First Russian Revolution.

State managed to calm down the riots. But as a result emperor Nikolay the Second established a Russian Parliament - Duma and granted certain rights and freedoms to the nation.

Nikolay also supported the new prime minister Petr Stolypin who was up to continue the reforms.

Unfortunately the reforms were stopped when terrorist killed Stolypin in 1911.