Famous Russians and Nobel Laureates - People we are proud about

Author: Dimitry Paranyushkin (on 17 Dec 2009)
Tweet
Below you can find a list of the important and outstanding people that we, Russians, are proud about. Also, there is interesting relevant information at Myths & Truth about Russia and Russian People sections — they both give a very interesting insight into what Russia is like right now.

Know any other famous Russians? Add them to this guide through ThisIsLike.Com

18th Century
Peter the Great - the person who created a Russian Empire and made it one of the most powerful countries
Ekaterina II (Great) - The most successful imperess of Russia, a very powerful and smart women.
Lomonosov, Mikhail - a peasant who lived in the north of Russia was so intelligent that he became the greatest scientist in Russia. He worked in physics, chemistry, math, literature and many other areas.
Suvorov, Alexander - the best Russian general. In the 18 century he defeated Osman Empire and almost took Istambul, he defeated French army in Italy and Austria.
19th and 20th Century
Pushkin, Alexander - genius poet, the main person in the Russian literature. (the portait below) 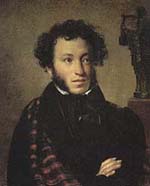 Kutuzov, Mikhail - is a student of Suvorov, won the War of 1812 year when Napoleon attacked Russia and captured Moscow. By his leadership we captured Paris.
Mendeleev, Dmitri - famous chemist, who invented the world-famous periodic system of elements (in 1869).
Pavlov, Ivan - a Russian biologist, who came out with an important work on animal and human reflexes ("pavlov's dog")
Tolstoy, Lev - a famous and great Russian writer. The author of "Anna Karenina" and "War and Peace". (the portrait below) 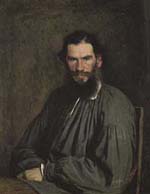 Dostoevsky, Fyodor - famous writer: the most popular novel is "The Crime and Punishment". Perhaps the best known Russian writer in the west.
Tchaikovski, Petr - best known Russian composer
Repin, Ivan - one the most popular painters (in Russia).
This free independent travel guide to Russia exists thanks to the commission we get when you order these hand-picked trusted third-party services or when you buy our book. Please, support us!
russian visa
train tickets
guide book
hotels
car rentals
travel insurance
20th Century
Lenin, Vladimir - is the "father of Russian revolution", the first communist leader. His real name is Ulyanov. 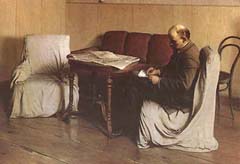 Krupskaya, Nadezhda - the wife of V.I.Lenin.
Tsvetayeva, Marina - A famous Russian poet
Stalin, Joseph - well known for his repression leadership
Zhukov, General - is a general who defeated Nazis.
Gagarin, Yuri - the first man in the space (1961). A national hero and a nice guy.
Vysotsky, Vladimir - a great poet, singer, and actor (70s).
Gorbachev, Mikhail- the Soviet leader who abolished the USSR
Pugachyova, Alla - used to be a very famous pop singer in the 80s, now she doesn't sing a lot, but is stilled loved by many Russians. I suppose it's more not for her songs, but for the image.
Eltsin, Boris - the first President of the Russian Federation.
Putin, Vladimir - the second President of the Russian Federation