Author: waytorussia (on 02 Jun 2015)
Tweet
Baikal lake lies along a tectonic break, that is the reason it is so deep (around 2000 meters (6300 ft), with quite possible 3300 meters (10000 ft) sediment under that). Baikal lake is also geologically active: the water gets churned up and the oxygen travels much deeper than in any other lake on Earth. Hot springs are scattered along the coastline and some of them are used for medical treatment. Baikal is so special and unique that there's even a special word made up by the Russian scientists: "Baikalogy" 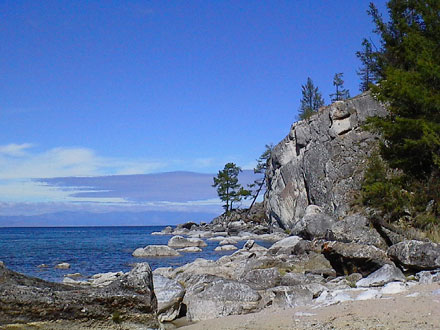 Baikal is one of the oldest lakes on the earth, the lake is considered to be 25-30 Mln years old. A normal lake exists about 15.000 years and then disappears. However Baikal lake is growing with an average speed of 2 cm (0.8 in) a year. There is number of researches which prove that Baikal will grow sometime into a new ocean. 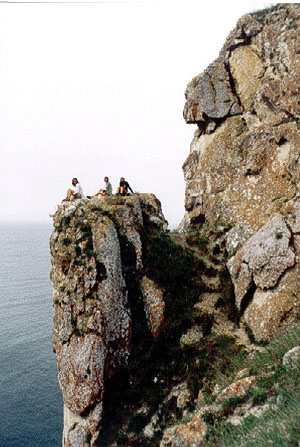 The area of Baikal lake is a highly seismic zone with the frequent earthquakes (usually there is a big earthquake once a two years). However there are few people live near the lake, so almost nobody is being hurt or wounded.

There are mountains all around the lake, the highest range is Ulan Burgasy Range (the highest mountain is 2840 meters or 9316 feet high). Baikal is one of the cleanest surface water reservoirs on earth and you can drink water right from the lake (well, I did). The water is cleaned by the unique micro organisms, which cleans the 50 meters deep slice of water surface three times a year. The lake is very windy and unsteady, it is almost impossible to get in the full calm there.

The remarkable flora and fauna of the lake is unique. There were found around 2600 species and almost 70% of it are endemic and can be found in the area of Baikal only. There are bears, foxes, eagles, mosquitoes and all other typical forest inhabitants. The “stars” of the lake are the Nerpa and Omul. Nerpa is the world’s unique freshwater seal, which can be found near the Ushkanye islands (between Olkhon island and Svyatoy Nos peninsula) and in the northern parts of Baikal. Omul is Baikal’s most popular fish, a far relative of Salmon. Both Nerpa and Omul are very special in the sense that this sort of creatures only exist in the oceans. However, somehow they found their way into Baikal. Some people think that they traveled to Baikal along the vast Siberian rivers, others believe that Baikal used to be an ocean before.