The Absurd of Confusion: Hedgehog in the Fog, Kin Dza Dza

Author: waytorussia (on 20 Jul 2015)
Tweet
During the late 70s and the 80s the ideological hold in the Soviet Union started to give crevices. It was not clear anymore where the country was heading and the past victories and achievements that could provide a certain degree of meaning started to fade away. 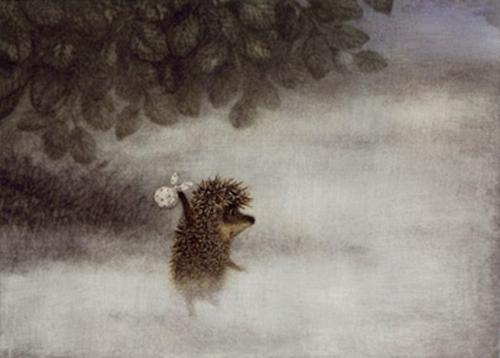 It is during that time that some of the best Russian cartoons and absurdist comedies appeared. The most talented scenarists, illustrators and artists could not find their place in the official Soviet cinema propaganda machine. However, the realm of cartoons provided a rich ground for allegories, which could escape censorship much better than any other art form.

One of the most notable works from that period is a beautiful, touching cartoon "Hedgehog in the Fog" by Yuri Norstein. Half dreamy allegory about life in general and the Soviet reality in particular, half philosophical fable it tells a story of a hedgehog lost in the fog, trying to find the way to his bear cub friend. At the end, the hedgehog stops trying to find his way in the fog, gives himself to the flow, which finally brings him to his friend's place, where they enjoy the warmth of each other's company. A very symbolic representation of a particular solution that is always available, both in times of ideological loss and in times of spiritual confusion.

Another notable film from that time is Kin Dza Dza - a dystopian black comedy directed by Georgiy Danelia in 1986. Reaching the absurdist climax, Kin Dza Dza is the epitome of the general state of confusion prevalent among Soviet intelligentsia at the time.

Towards the end of the 80s absurdist fiction got replaced with the calls for changes and transformation. It is in this context that the film Assa appeared starring the Soviet and then Russian rock start Victor Tsoi. Rather than trying to laugh at reality, it's one of the first films that lays bare the scope of the coming destruction and tries to look fearlessly into the future that is yet to come. The closing scene of the film features Victor Tsoi and his band Kino singing "our hearts need the change!", which later became sort of an unofficial hymn for the younger generation.